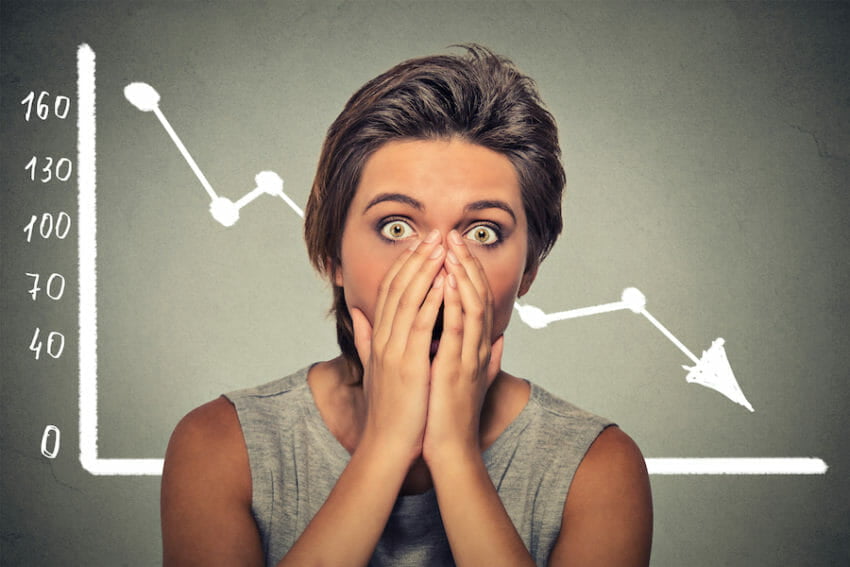 Maybe it makes me unsophisticated, but I don’t think about the stock market that much. I know that many say it’s the central nervous system of our economy. I know its estimated worth is around $30 trillion. And I know that when it tanks, the lives of millions of Americans are wrecked, ruined and upended. I know that when that happens, the powerful millionaires (and billionaires) who caused said destruction generally grab their money and their well-coiffed dogs and run for it. (Sometimes our government has to step in to make sure the elites get all of their money and don’t have to share in the devastation they’ve dispensed to the lower classes.)

But in my day-to-day life, I don’t think much about the stock market. So maybe I shouldn’t care that the entire thing is a gigantic fraud. But I do. I do care. And you should too.

In a few minutes’ time you will see that our stock market is a Ponzi scheme. (And unfortunately, it doesn’t matter whether you’re happy or sad or ambivalent about that fact. It will be true nonetheless.)

When you picture buying stock in a company, what do you picture? You probably imagine a company like PepsiCo, and you are an investor in that company. You own a tiny piece of it, and because of that, you get a tiny proportion of the profits, which are called “dividends.” Well, that’s not what a stock is. That’s what stocks used to be, but that was back when top hats were worn by non-magicians, and if a lady showed her knees in public, she was considered a floozy who should die alone.

In modern times, you almost never receive the profits of the business. Dividends are rarely paid out, and they don’t usually amount to much. Plus, the company is not obligated to pay you anything for your stock ever.

Don’t take it from me, take it from someone much smarter than me. Here’s an example about Google from Tan Liu’s book “The Ponzi Factor.”

A share of Google can trade around $900, but Google explicitly states in writing that the par value of their stock is only 0.001 dollars. Google also says that they do not pay their investors any dividends, and their class C shareholders have no voting rights. So, if you own a share of GOOG, you won’t receive any money from Google, you won’t be allowed to vote on corporate issues, and Google isn’t obligated to pay you anything more than 0.001 dollars for that share you bought for $900.

So this begs the question, “What the hell do you own?” The gut-wrenching answer is nothing. You own nothing. You own a slip of toilet paper that you might be able to convince someone else to pay you for.

Next, if you’re feeling cheeky, you might ask, “Then where do the profits come from? If I buy Google at $20 and sell it for $220, where did that $200 come from?” The answer is it came from other investors who were willing to buy the stock. As Tan Liu puts it,

This is actually a negative-sum situation because the underlying company isn’t involved in the transaction. The investors are just cannibalizing each other for profits, and there are fees attached to every transaction.

The money you make from most stocks, if you make money, is coming from other investors pumping new money in. And if there aren’t new investors willing to buy your stock, then you’re just screwed, standing there with your thumb up your ass (which is an odd expression if it’s supposed to mean the person is doing nothing; in fact, it sounds like they’re involved in a very significant event).

So, to rehash, this is a system where you buy into something and the only way you make money is by convincing someone else to buy it. If no one does, then you lose everything. Why does that sound familiar? Oh, I know. It’s the dictionary definition of a Ponzi scheme.

Again, don’t take my word for it. The Securities and Exchange Commission (SEC) defines a Ponzi scheme as “[a]n investment fraud that involves the payment of purported returns to existing investors from funds contributed by new investors.”

This means that the only way to get your money back or to profit is to find another person willing to buy it. Now, don’t get me wrong. Your argument may be, “This is America—there’s always another chump! We are based on a long, time-honored tradition of never running out of chumps! We’re infested with ’em.”

That’s a fair point, but I don’t think you see anyone proudly touting that as the definition of the stock market. I would actually respect the whole system if right on the front of the stock exchange it said, “Put your money into the stock market! The only way you’ll make more money is if you find a dolt to buy whatever stocks you just bought. But there are an infinite number of dolts! This gravy train is powered by morons. So you have nothing to worry about.”

If it said that on the door of the stock exchange, I would invest.

But the fact that our stock market is a house of cards built on idiocy, stacked on spider webs, hanging tenuously from the Hindenburg, is actually kind of a big deal. Think about this:

As of Sept. 2017, the NASDAQ and the NY Stock Exchange had a combined value of over $30 trillion. … [This] means investors believe they are entitled to $30 trillion in real money. But there is only $1.6 trillion of cash circulating in the U.S. economy, and $3.8 trillion in existence in the entire U.S. economic system.

Only $3.8 trillion in hard cash, which means the stock market is built mostly on nothing (much like Jared Kushner). And if a fraction of investors wanted their cash at the same time, it would collapse.

Let me just say, I don’t have any problem with gambling. If you want to gamble at a casino, then gamble your little heart out. Stay up all night until you’re on your last $2 trying to give a handie to a slot machine in hopes it might pay ya afterwards. Go for it. But the casinos are honest with you. They tell you it’s gambling. The front of a casino doesn’t say “Invest your pension in roulette. Do you have a child with a degenerative disease? Then put all your savings on red-32 so that he’ll be taken care of after you’re gone.”

Casino’s don’t say that. The myth of the stock market does.

And some people may think that if it were truly gambling, that would mean it’s not predictable. Yet finance professionals claim they know how to analyze and predict the market. So you put your money in their (greasy) hands, and they help you grow your fortune. Well, multiple tests have been done to see whether the professionals know how to predict the market. Liu referenced one contest that was also covered by Forbes:

[The contest] was between amateur students, finance professionals, and a cat named Orlando, who did all his investing by tossing his favorite toy mouse onto an electronic grid. Orlando, the cat, won the competition.

I repeat: A cat was able to better predict the stock market. And yet, trillions of dollars in pensions and life savings are dumped into stocks by people hopingthat whomever they trusted that money to is smarter than a cat.

Yet they aren’t. They aren’t smarter than the fucking cat.

What other profession is that true for? Anything from math teacher to maintenance man to tennis player, if you were worse than a cat, they would get rid of the whole profession. (And at some point, someone would say, “Besides, the kitten tennis players draw a far bigger audience anyway.”)

But it’s true for financial advisers—because the stock market is a Ponzi scheme. It’s a racket, a hustle, a con, a fast one, a hose job, a crooked calzone! (I think I made up that last one.)

And yet, in many cities gambling is illegal. They’ll send in armed police to break up poker games. You have to get a permit for a raffle. But when a sociopath in Chicago bets your entire pension and loses, there’s no SWAT team, no arrests. Because it’s a legalized Ponzi scheme.

By the way, these ideas are not allowed on our corporate media or financial websites. The almighty stock market does not permit even the slightest doubt to creep in. Tan Liu has tried to put his ideas on popular finance blogs and web forums, and they are often either deleted or he’s been banned altogether. He’s been banned from Quora and from editing Wikipedia. They act like he went on a Scientology website and wrote, “You know Tom Cruise is not an alien messiah. He’s just a short weirdo!”

It’s tough to overstate the impact this con game has on our world and our lives. For example, when the news came out that North Korea had brokered peace with South Korea, the stocks of the major weapons contractors crashed. Billions of dollars were “lost.” That exerts major pressure on powerful people to ensure peace does not happen. This is just one example of how strong the gravity of this Ponzi scheme is.

There are some steps we could take to make the stock market less exploitative. We could stop speaking about stocks as if they’re money. You know, stop saying you have $1,000 of Apple shares and instead say you’ve got “1,000 padoodles of Apple shares.” If you sell them, only then do you have $1,000.

Step two is to realize that the market economy in general is designed to exploit billions of us while a tiny number get ridiculously rich. It doesn’t care about the health or sustainability of our society as it facilitates the extraction of all the wealth and resources by sociopaths. Just ask Jeff Bezos—he’s now worth 150 billion padoodles of Amazon stock while his workers are on food stamps.