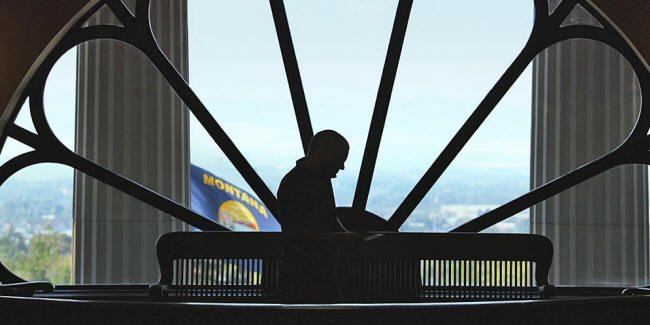 If you, like most Americans, believe you’re being screwed by the U.S. political system, and would like to know exactly how the screwing functions, tune into “Dark Money,” a new documentary (video at bottom page) premiering Monday, October 01 on PBS.

The film, directed by Kimberly Reed, is one of the most expert dissections ever conducted of the subterranean tentacles quietly strangling U.S. democracy.

NOTE: “Dark Money” was co-funded by Topic Studios, which is part of First Look Media, along with The Intercept.


The movie is largely about the last decade of politics in Montana.

This long-term, close-to-the-ground focus is cinematically unique, and makes it possible for “Dark Money” to illuminate three startling facts about how America now works.

Big, out-of-state money therefore can flood into small races in the last weeks before an election with total anonymity, paying for the sleaziest ads and mailers imaginable, produced by organizations created solely for that purpose.

For instance, as the film depicts, three days before the 2008 GOP primary, a group calling itself Mothers Against Child Predators sent out bulk mailings suggesting that John Ward, an incumbent Republican state representative, was a secret admirer of the serial killer John Wayne Gacy, simply because he opposed the death penalty.

Ward then was defeated by a little-known, more conservative challenger. Mothers Against Child Predators, having served its purpose, vanished, with Montanans having no idea who was behind it.

This secrecy serves the corporate right both coming and going:

Voters can’t judge whether big, out-of-state interests are behind ads, and corporate funders won’t suffer brand damage when they back smear campaigns or push extreme candidates.

But “Dark Money” is just a chapter in the long story of the corporate right’s attempts to empty democracy of any meaning.

It will make more sense if, before watching it, you take a big step back and consider how we got here. 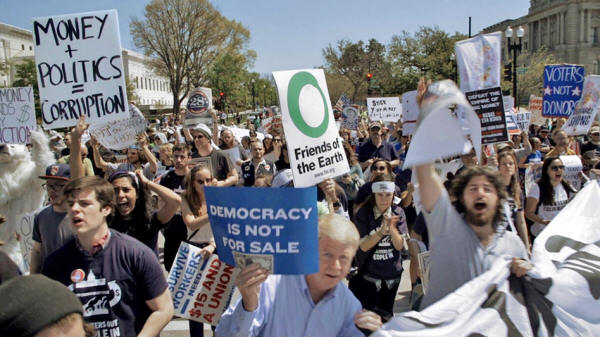 A still from the documentary of

Any country can have no more than two of them simultaneously:

As Ann Ravel, former chair of the Federal Election Commission (FEC), points out in “Dark Money,” Watergate was in some ways a campaign finance scandal.

In 1974, Congress responded by making sweeping revisions to campaign finance law, placing strict limits both on contributions to and expenditures by candidates.

This was an attempt to keep #1 and #2 – i.e., democracy and yawning wealth inequality – while getting rid of #3, total freedom to spend for the super-rich.

Ever since, the corporate right has been patiently eroding this arrangement. In 1976, the Supreme Court ruled – on a lawsuit spearheaded by a young conservative lawyer named John Bolton – that restrictions on campaign contributions were legal, but those on campaign expenditures were unconstitutional.

Over the following decades, other suits have stripped away additional chunks of the 1970s reforms, culminating in 2010 with the Citizens United decision.

Citizens United and related rulings made it possible for anyone, including corporations, to spend unlimited amounts supporting a political campaign, on one vague condition:

that the spending could not formally be “coordinated” with the candidate.

This project has been an attempt to mold the U.S. into a country with situations #2 and #3 – i.e., wealth inequality plus total freedom to spend for the ultra-wealthy – while getting rid of #1, a functioning democracy.

Since 2010, the right has continued to rend its garments about the tyranny of any rules restricting the super-rich, while working toward its ultimate goal:

unlimited money in politics from all sources, spent in total secrecy with no disclosures.

While the right is correct that anything short of this does in some peculiar sense make corporations and billionaires less “free,” it is wrong that that’s a bad idea.

Take it from free-market hero Adam Smith, who wrote in “The Wealth of Nations” that,

“such regulations may, no doubt, be considered as in some respects a violation of natural liberty.

But those exertions of the natural liberty of a few individuals, which might endanger the security of the whole society, are, and ought to be, restrained by the laws of all governments.”

(Smith was talking about banking regulations, but the same point applies to campaign finance.)

Americans could also try to create a society that was a real democracy with few regulations of political spending.

But that would require getting rid of our glaring wealth inequality. That’s certainly not on the table now, but it’s a totally normal, mainstream idea – at least if you consider Aristotle, Benjamin Franklin, or John Adams to be normal and mainstream.

As Adams wrote in Philadelphia just before the signing of the Declaration of Independence,

if a country wants to be self-governing, it should engage in massive property redistribution from the rich to everyone else.

While we work on that, however, the best we can do is try to force the government to enforce the weak restrictions on political money that still exist.

That’s what “Dark Money” is about… 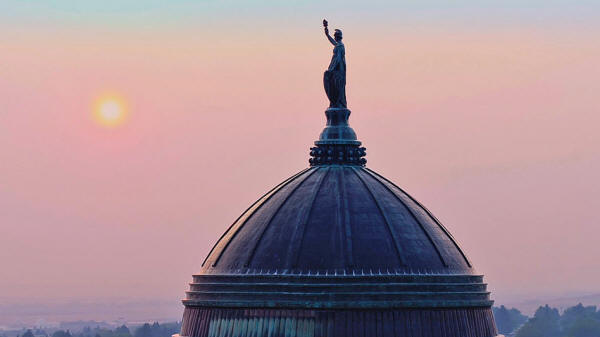 A still from the documentary

“Dark Money” is filled with such surprising twists, both heartbreaking and thrilling, that it would be unfair to spoil them. But when you get to the end, you should be aware that there are more twists to come, quite soon.

The peculiar reality about dark money is that neither Citizens United nor any other Supreme Court decision has found that it would be unconstitutional to force dark money into the sunlight.

“disclosure is the less-restrictive alternative to more comprehensive speech regulations.”

It’s simply that the political system has decided not to do anything about it.

For instance, the president could issue an executive order requiring all corporate federal contractors to disclose contributions to dark money organizations.

Barack Obama was urged to do so for years, but never did.

Congress could require the Internal Revenue Service to increase its investigations into whether nonprofits are adhering to the legal requirement that political activity not be their “primary” purpose. Instead, with the GOP in control, the IRS has been intimidated into not investigating this at all.

Meanwhile, it used to be the case that nonprofits were at least forced to disclose their big donors to the IRS, even if that information remained secret.

The Trump Treasury Department has changed the rules so that the IRS no longer receives this information.

The FEC could have issued regulations requiring that dark money contributions be disclosed. But starting in 2008, Republicans commissioners have generally voted together as a block to stop any new campaign finance rules.

However, the FEC has been successfully sued in a dark money case, with a judge on the U.S. District Court for the District of Columbia giving the FEC 45 days to issue new regulations forcing the disclosure of dark money donors.

The bad news can be deduced from archival footage late in “Dark Money” showing Don McGahn, a Republican campaign finance lawyer, during his time as an FEC commissioner from 2008 to 2013.

He was the primary force behind the GOP strategy of constant FEC deadlock.

Where is McGahn now? He’s Donald Trump’s White House counsel. And he was one of the main champions of Brett Kavanaugh‘s nomination to serve on the Supreme Court.

If Kavanaugh makes it there, he’ll certainly vote to reverse the recent dark money decision if given a chance, and much more besides.

So definitely watch “Dark Money” tonight if you have any interest in how to drain our nationwide swamp.

You will never see more hopeful examples of how normal people can fight and win skirmishes with big money. You’ll also never see more clearly the price they have to pay, and size of the beast they’re up against.

And at the end, you’ll understand that we’re still in the midst of a gargantuan war.