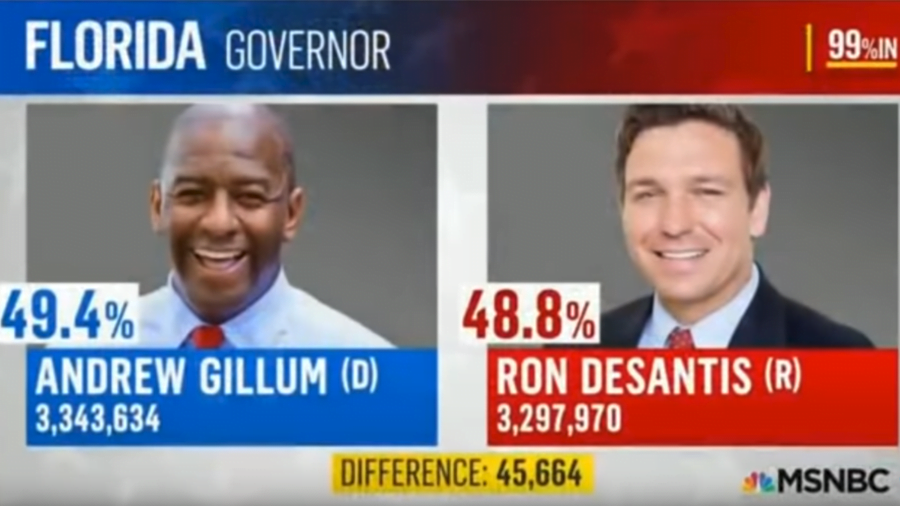 MSNBC can now boast of being the first news outlet to break results from Tuesday’s midterm elections – hours before voting began. The network said it “misfired” after airing a fake vote tally from Florida’s gubernatorial race.

Viewers watching MSNBC’s election coverage on the eve of nationwide midterms were likely puzzled to learn that Democrat Andrew Gillum had already been declared the next governor of Florida. With 99 percent of the votes counted, Gillum had purportedly triumphed over his rival, Republican Ron DeSantis, by 0.6 percentage points, MSNBC reported almost a full day before voting was set to begin.

MSNBC accidentally shows false results of Tomorrow’s election that has not happened in Florida showing socialist Gillum in slight lead against ⁦@RonDeSantisFL⁩. Wishful thinking? What do you think https://t.co/IHaTFIAYEq

The graphic, flashed up on screen, briefly airing during “All In,” with openly liberal host Chris Hayes, and showed Gillum winning the election by receiving about 45,000 more votes.

Shortly after the mistake was realized, host Chris Hayes quickly clarified the prophecy, blaming the fictitious tally – which was briefly flashed on screens across the US – on a system “misfire.”

“Quick clarification here,” Hayes announced during the election eve broadcast. “Just want to say, earlier this hour we showed a graphic of the Florida gubernatorial race. May have caught your eye because our system had inadvertently populated some test numbers.”

“That was a misfire. Don’t worry.”I was pretty confused when I saw it up there, to see it myself.”