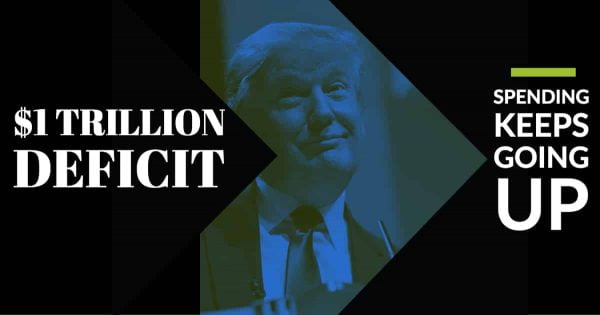 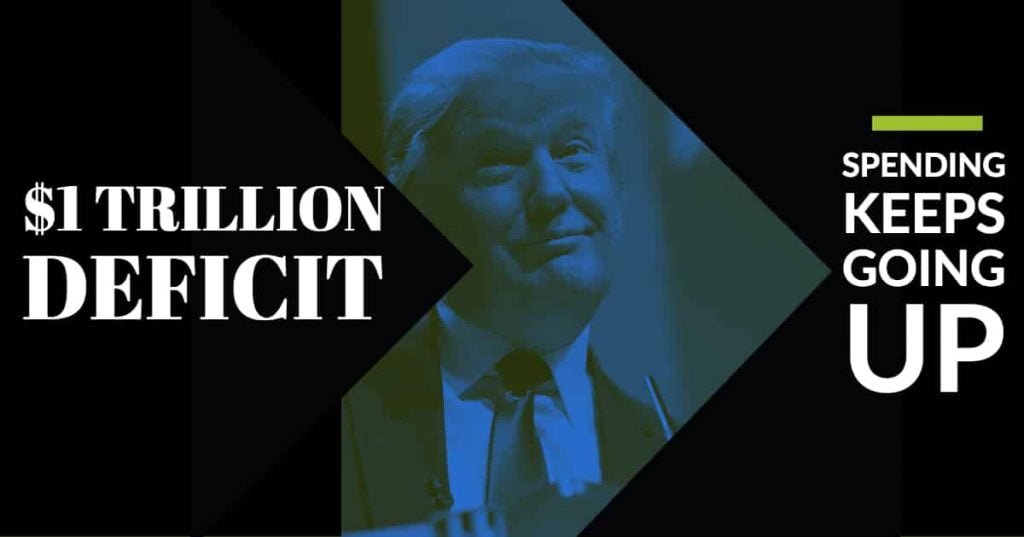 The Trump administration is on track to post a 2019 fiscal year budget deficit of over $1 trillion. These are the kind of budget deficits we would expect to see during a deep recession, not an “economic boom.”

The government got off to a good start at achieving this illustrious achievement last month. According to the Treasury Department report, the deficit came in at $100.5 billion in October. That represents a 58 percent increase from the $63 billion deficit recorded in October 2017. Spending rose 18 percent year-on-year. Revenues only increased by 7 percent. The month-on-month increase was impacted by a quirk in the calendar. Total outlays were much higher this October compared to last year because Social Security payments for October 2017 went out in September due to Oct. 1 falling on the weekend. Nevertheless, we should have seen a decrease in this year’s September outlays compared to last year and that didn’t happen. The September 2018 deficit was significantly bigger (119.116) than September 2017 ($7.886 billion) even without the October Social Security payments falling in September this year. The bottom line is spending is going up year-over-year.

Spending last month continued the pace of the last fiscal year. The federal government ended 2018 with the largest budget deficit since 2012. Uncle Sam ended 2018 $779 billion in the red, adding to the ballooning national debt. The CBO forecast this year’s deficit will come in close to $1 trillion. The current Treasury Department estimate projects a total fiscal 2019 deficit over the $1 trillion mark, coming in at $1.085 trillion.

The national debt expanded by more than $1 trillion in fiscal 2018. It currently stands at over $21.7 trillion. According to data released by the Treasury Department, fiscal 2018 gave us the sixth-largest fiscal-year debt increase in the history of the United States. (If you’re wondering how the debt can grow by a larger number than the annual deficit, economist Mark Brandly explains here.)

Although the economy is supposedly in the midst of a boom, U.S. government borrowing looks more like we’re in the midst of a deep recession. Long-term US debt sales have risen to a level not seen since the height of the financial crisis. In October alone, the US Treasury sold over $80 billion in public debt. The government spent $32 billion simply paying the interest on outstanding debt. That was roughly a 30 percent increase from a year ago.

Annual interest payments already approach $500 billion. Every uptick in the interest rate increases that number. At the current trajectory, the cost of paying the annual interest on the U.S. debt will equal the annual cost of Social Security within 30 years.

This is not good news for the U.S. economy. Large levels of debt retard economic growth. This explains why despite what is supposed to be a booming economy, revenues to the U.S. Treasury are only up 7 percent year-on-year. Most of that increase came from tariffs and excise taxes. Corporate and individual tax receipts are up around 1 percent.

Several studies have estimated that economic growth slows by about 30 percent when the debt to GDP ratio rises about 90 percent. Most analysts say the U.S. economy is already in the 105 percent range.

Michael Maharrey [send him email] is the Communications Director for the Tenth Amendment Center, where this article first appeared. He proudly resides in the original home of the Principles of ’98 – Kentucky. See his blog archive here and his article archive here. He is the author of the book, Our Last Hope: Rediscovering the Lost Path to Liberty. You can visit his personal website at MichaelMaharrey.com and like him on Facebook HERE