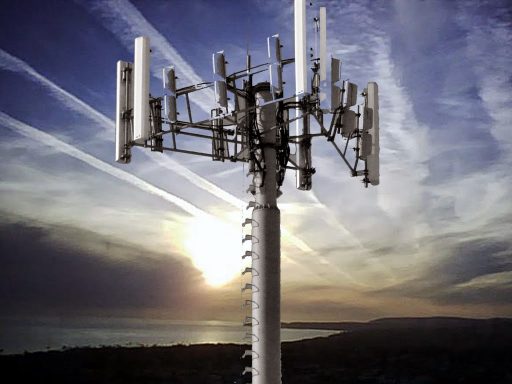 When your stuff is designed to break down, that’s ‘planned obsolescence.’ In fourteen short years, we have gone from 2G wifi (2004) to 5G, from flip phone to smart phone. By design. Are we smarter? Healthier?

On September 26, 2018, the Federal Communications Commissions (FCC) voted to implement its Wireless Infrastructure Order (dockets 17-79 and 17-84). The order preempts local control of the public rights-of-way.

Wireless companies can now more easily install cell towers in front of your home without your consent, all to irradiate those nearby with intense, pulsed, data-modulated, Radio-frequency Electromagnetic Microwave Radiation (RF-EMR) — 24/7. 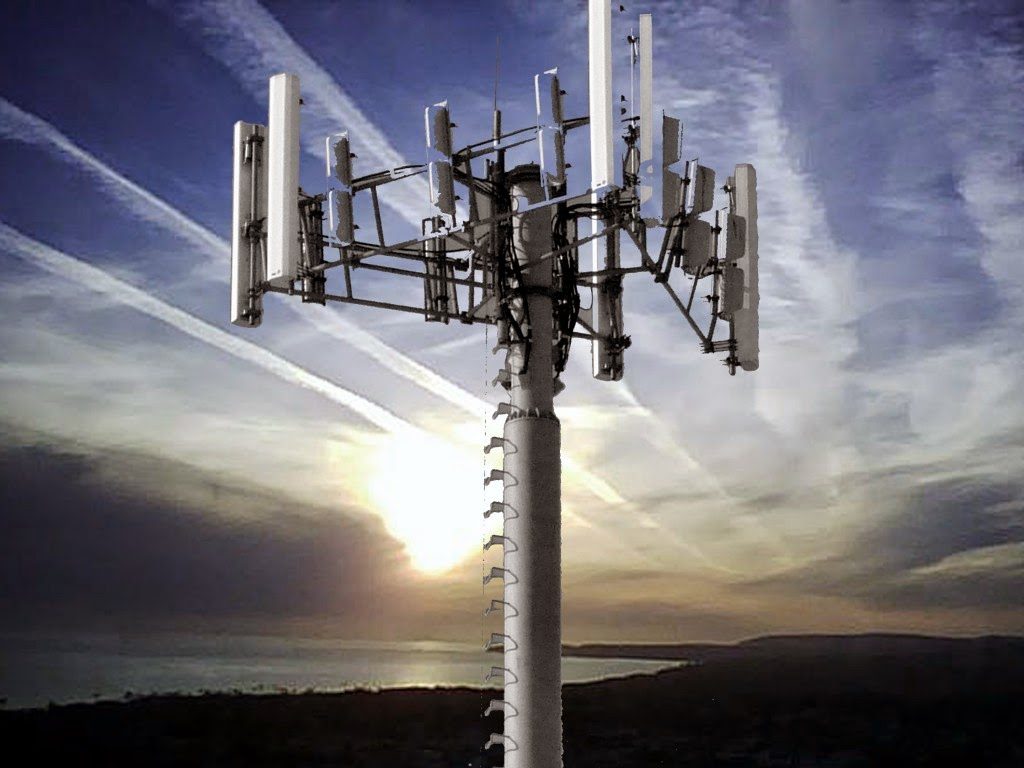 U.S. Wireless companies are in charge. About 800,000 new antennas will be deployed – more than the total number of cell towers built over the past three decades.

Every wireless company will build its own 5G network, which requires the installation of new equipment even though they plan to use existing infrastructure in the form of street lights, so to remain “unobtrusive to customers.”

What about the obtrusive health effects of millimeter wave technology targeting people on every street?

Millimeter waves are currently used by the U.S. Army as a crowd control dispersal weapon called Active Denial Systems. This would suggest that Congress plans to formalize 5G deployment unless they hear otherwise from constituents, and soon.

Then again, why would legislators listen to anyone when 5G is being “tested” in 19 cities across the US?

If you use a wireless system in your home, you are exposed to non-ionizing radiation. This doesn’t mean that it’s safe. Examples include: wireless router or TV, cable boxes, Playstation or Xbox 360, wireless cameras, keyless cars, and cordless phones.

These devices transmit radio signals 24/7 as well as receive them. Any metals, from coil spring mattresses to braces in your mouth direct the waves to your body. Both you and your home become a radio station.

The 5G system is a Y-GIG wireless network that operates in bands up to 100 GHz. It requires a “5G-enabled device” or receiver (modem or chip) that rebroadcasts millimeter waves into your home.

Dr. Devra Davis, President of the Environmental Health Trust says, “Most people are unaware that these waves are cycling several billion times per second. 75 GHz is in fact 75,000,000,000 cycles per second, “which can induce unpleasant burning sensations on the skin.”

Human skin acts as an array of antennas which are affected by millimeter waves to cause physiological stress as seen manifested in pulse rate and the systolic blood pressure.

The frequency of 60 GHz is the frequency at which oxygen molecules oscillate. 5G will disrupt the uptake of oxygen to cause oxygen deprivation to each cell at the level of the mitochondria. Without oxygen, the liver becomes congested and the body, and brain, begins to break down.

“Peer-reviewed research has documented industry influence on studies of the health impacts of wireless radiation. We are insisting on a moratorium on 5G until non-industry research can be conducted to ensure the safety of the public.” — Dr. Joel Moskowitz, professor of public health, University of California, Berkeley

Dr. Joel Moskowits of the U.C. Berkeley School of Public Health links wireless EMF to a variety of illnesses including an increased risk of brain cancer. He notes that the frequency, modulation and pulse of carrier waves affect biology as much as the intensity (thermal exposure) of the 5G signal.

However, governments monitor thermal exposures only. They do not consider modulation and pulsing of waves as being relevant at all.

The Current 4G (4th generation) wi-fi network of cell towers transmits at 2.4 GHz. These frequencies vibrate at the same frequency as water. On a molecular level, humans are made of 99.9% water. We are light beings and water beings affected by energy.

In 2004, firefighters in Sacramento reported memory problems and confusion following the installation of 2G towers in Los Angeles. Some cities, including Santa Rosa, have since halted their 5G planswhile health concerns are addressed.

As old networks are made obsolete with new ones that boast faster and faster connection speeds, are we not seeing a planned obsolescence of health roll out in front of our eyes?

Trees suck carbon dioxide from the atmosphere and give off oxygen. In light of the oxygen-sucking 5G grid, trees are essential. Planting trees to increase oxygen, and to reduce the threat of drought and future ‘dust bowls’ seems like a no brainer.

There is also a dose-response relationship between urban tree cover density and self-reported stress recovery. Studies show reduced physiological markers of stress in subjects simply looking at images of nature.

The 5G short wavelength does not penetrate trees and homes. This is why mini towers will be deployed on streets in front of homes.

In fact, trees are being systematically targeted for removal all over the country. In Nebraska, shelterbelts (trees) are being cleared to make way for more crops. During the California fires, Directed Energy Weapons targeted trees in neighborhoods.

Whole forests have been burned along straight lines, obeying fences. Add to that, the sanctioned poisoning of hardwood trees by timber companies that has led to over one million dead trees to create a fire hazard. Real trees are also being replaced by fake plastic trees! 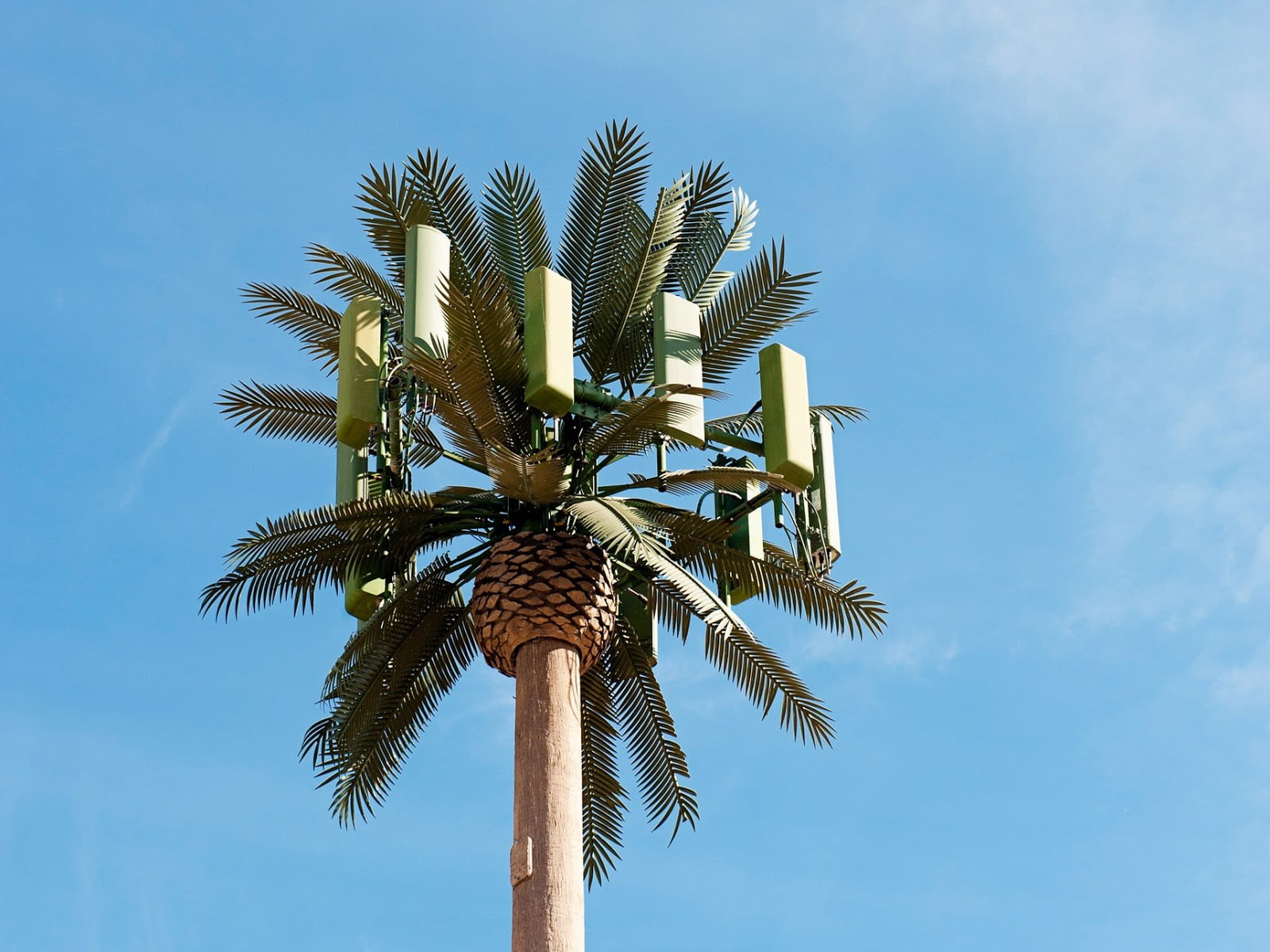 Wireless radiation in the MHz, GHz and THz is literally millions, billions and trillions times (respectively) the normal frequency of the Earth – the Schumann Resonance of 7.83 Hz. It has long been suspected that the Schumann Resonance is a reflection of human consciousness, showing humanity’s direct connection to Earth.

Human consciousness can impact the magnetic field and create disturbances in it, particularly during moments of high anxiety, tension and passion. On 1/31/2017, for the first time in recorded history, the Schumann Resonance reached frequencies of 36+.

On November 5, 2018, peaks around 3 am reached 40 Hz. Because 5G frequencies affect thought patterns and the mind, they can be used as a form of technological slavery.

The International Society of Doctors For The Environment, comprised of over 200 scientists and numerous peer-reviewed studies on health effects, has appealed for a standstill under the Precautionary Principle. They have yet to receive any formal response. Who is in charge?

The Fight Against Big Telecom

The FCC argues that their new technology is safer due to “lower intensity.” This is not true.

According to peer-reviewed studies on electromagnetic health, the brain reacts more rapidly to the newer cell technologies. Effects include changes in brain activity, metabolism, and heat changes when holding a cell phone to the head.

Even so, the FCC has the support of the federal government even if the science of health effects is not taken into account.

In fact, the San Francisco ordinance to halt the 5G rollout has created pushback by the Telecom Industry in the courts. See The Wireless Association v. City of Berkeley San Francisco, California September 13, 2016, where CTIA attempted to block Berkeley’s cellphone ordinance.

A Return to Nature

When your federal and state governments work for corporations, and not you, what can you do?

Visit Saferemr.com for updates. 5G cell phones invade Earth around 2019-2020 since in current form they cannot contain the heat that would destroy them.

Soon, solar powered clothing will be released to keep all the wearable technology fully charged. Be ready with countermeasures. See previous article on Weaponizing Frequencies: The Coming Tidal wave.

During this technological devolution, we are called to embody a higher vibration for a spiritual evolution. Choose wisely.