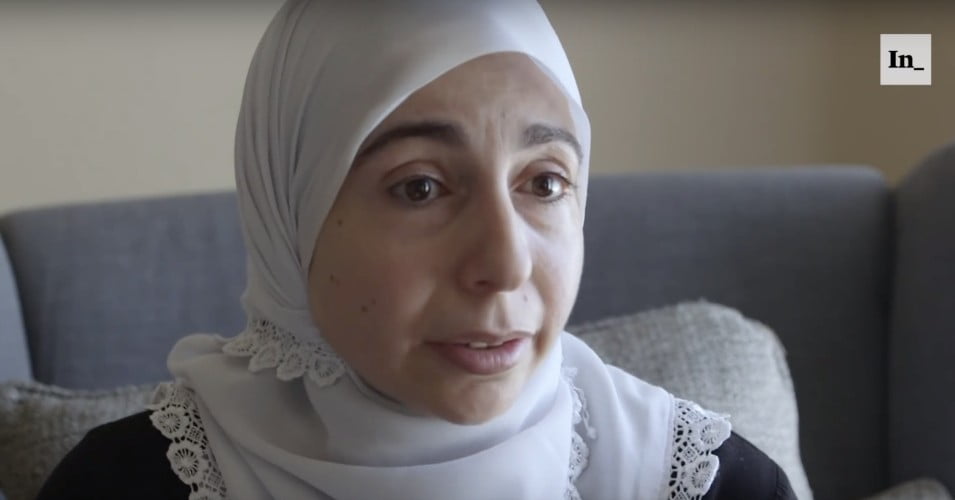 The case has cast a spotlight on all states with “laws that subordinate Americans’ free-speech rights to Israel’s ‘right’ to continue the occupation without criticism or consequence.”

“It’s baffling that they can throw this down our throats, you know, and decide to protect another country’s economy versus protect our constitutional rights,” speech pathologist Bahia Amawi said of American officials who pass anti-BDS measures, in a video published Monday by The Intercept. (Photo: YouTube/The Intercept)

Texas officials are facing an onslaught of criticism after a speech pathologist lost her job at an elementary school for refusing to sign a pro-Israel pledge mandated by state law—a case that has cast a spotlight on efforts to neutralize the global Boycott, Divestment, and Sanctions (BDS) movement, which opposes Israel’s oppression and slaughter of Palestinians.

“The language of the affirmation [speech pathologist Bahia] Amawi was told she must sign reads like Orwellian—or McCarthyite—self-parody, the classic political loyalty oath that every American should instinctively shudder upon reading.”
—Glenn Greenwald, journalist and attorney

According to a database maintained by a U.S.-based pro-Israel group, through executive orders and state-level legislation, elected officials in 26 states have imposed restrictions on people who wish to back BDS—a movement that was inspired by the 1980s initiative that helped force an end to racial apartheid in South Africa.

As Jameel Jaffer, director of the Knight First Amendment Institute at Columbia University, noted on Twitter, legislators in several other states are currently considering similar “laws that subordinate Americans’ free-speech rights to Israel’s ‘right’ to continue the occupation without criticism or consequence.”

A woman working as a speech pathologist in Texas was fired for refusing to sign a loyalty oath promising not to boycott Israel. Such laws are becoming common in the U.S. for some insane reason: https://t.co/wqn4xoIITb pic.twitter.com/dqGSluBWmd

The Texas law, passed last year, bars governmental entities from contracting with any person or company that engages in a boycott of Israel, defined as “refusing to deal with, terminating business activities with, or otherwise taking any action that is intended to penalize, inflict harm on, or limit commercial relations specifically with Israel, or with a person or entity doing business in Israel or in an Israeli-controlled territory.”

As detailed in a Monday report by The Intercept‘s Glenn Greenwald and a lawsuit (pdf) filed on behalf of the speech pathologist by the Council on American-Islamic Relations (CAIR), the nation’s largest Muslim civil rights and advocacy organization, critics charge that anti-BDS measures like Texas’s violate the free speech guarantee of the First Amendment.

“Texas’s ban on contracting with any boycotter of Israel,” the CAIR lawsuit charges, “constitutes viewpoint discrimination that chills constitutionally-protected political advocacy in support of Palestine.”

One of the more outrageous examples of how Israel advocates in the United States are squelching free speech https://t.co/ZxJrsbVsUW

Bahia Amawi was born in Austria, but is a U.S. citizen and has lived in the country for the past three decades. Fluent in English, German, and Arabic, the mother of four earned a master’s degree in speech pathology in 1999. In 2009, she started working for the Pflugerville Independent School District in Texas on a contract basis to assess and assist children aged 3 to 11 as the region saw an influx of Arabic-speaking immigrants.

However, this year, after Amawi refused to sign the pro-Israel oath included in her contract renewal, she lost her job. As Greenwald, who is also a constitutional attorney, concluded, “The language of the affirmation Amawi was told she must sign reads like Orwellian—or McCarthyite—self-parody, the classic political loyalty oath that every American should instinctively shudder upon reading.”

One of the most remarkable elements of the oath Amawi refused to sign is just how specific and unusual it is. As Greenwald outlined:

This required certification about Israel was the only one in the contract sent to Amawi that pertained to political opinions and activism. There were no similar clauses relating to children (such as a vow not to advocate for pedophiles or child abusers), nor were there any required political oaths that pertained to the country of which she is a citizen and where she lives and works: the United States.

In order to obtain contracts in Texas, then, a citizen is free to denounce and work against the United States, to advocate for causes that directly harm American children, and even to support a boycott of particular U.S. states, such as was done in 2017 to North Carolina in protest of its anti-LGBT law. In order to continue to work, Amawi would be perfectly free to engage in any political activism against her own country, participate in an economic boycott of any state or city within the U.S., or work against the policies of any other government in the world—except Israel.

“It’s baffling that they can throw this down our throats, you know, and decide to protect another country’s economy versus protect our constitutional rights,” Amawi said of American officials who pass anti-BDS measures, in a video published Monday by The Intercept. Speaking of the example she hopes to set for her kids, she added, “I knew something had to be done and I couldn’t just let it pass by.”

We have long defended the right to participate in political boycotts, which are a proud part of this country’s constitutional tradition — and we're not backing down now. https://t.co/EAse01eFG3