Prepare For Change
Home Awakening There isn’t just one good reason to avoid the flu shot –... 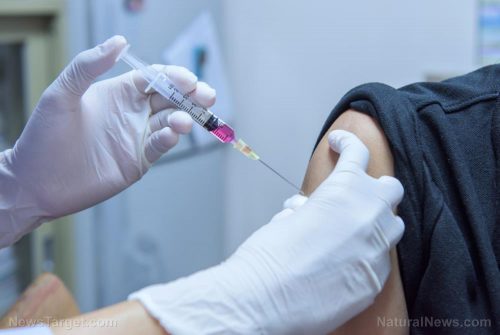 In case you haven’t noticed, every Walmart, Walgreens, and CVS in the country is once again in fear-mongering mode when it comes to pushing their customers to get the flu shot. But for all of the reasons that the U.S. Centers for Disease Control and Prevention (CDC) says that Americans should just roll over and take the seasonal jab, there’s plenty more scientific reasons not to – the following 10 reasons topping the list:

One (1) of them is that most flu shots still contain neurotoxic mercury in the form of thimerosal. While many other childhood vaccines have had thimerosal mostly removed from their ingredients lists, save for “trace amounts,” flu shots are among the remaining holdouts – even though there’s admittedly no safe amount of mercury that can be injected into the human body.

Believe it or not, many flu shots also contain dangerous antibiotic drugs like neomycin and gentamycin (2) that can contribute to the development of antibiotic-resistant “superbugs.” These same antibiotics can also damage a person’s beneficial gut bacteria, making them more prone to gastrointestinal issues and other forms of disease.

Independent laboratory tests have shown that many flu shots are contaminated with glyphosate (3), the primary active ingredient in Monsanto’s (now owned by Bayer) Roundup herbicide. Glyphosate is associated with autism, irritable bowel syndrome, and non-Hodgkin’s lymphoma, and has been declared by the World Health Organization (WHO) to be “probably carcinogenic.

Flu shots are also loaded with other toxic substances like aluminum, formaldehyde (rat poison), carbolic acid, and even antifreeze, all adjuvants that sound science has shown are highly toxic to the human body (4).

While flu shots are branded as a type of cure for disease, studies show that they actually cause and spread disease (5). As many as 80 percent of people who get the flu jab continue to “shed” and spread the virus for a full week after being vaccinated.

The human brain isn’t exactly a fan of flu shots, as studies show that people who get them have a substantially higher risk of developing Alzheimer’s disease and dementia (6). People who get flu shots have a tenfold increased risk of Alzheimer’s, in fact, which is due to the shot’s inflammatory effects inside the body and brain.

Flu shots are also associated with a deadly neurological condition known as Guillain-Barre syndrome (7), which the U.S. Department of Health and Human Services (HHS) lists as among the top adverse effects associated with flu shots.

HHS also warns that flu shots are prone to causing viral mutations (8) which, like antibiotics, can cause antibiotic-resistant superbugs.

When it comes to one’s overall risk of disease, that risk increases all across the board in conjunction with getting flu shots (9). There have been many proven cases of flu shots causing conditions like transverse myelitis, gastroparesis, brachial neuritis, and Bell’s palsy.

Perhaps the worst thing about flu shots is that they often don’t even work (10). The entire flu shot industry is based around a guessing game of trying to pre-determine which flu strains are going to circulate in a given year – a process that, far from being scientific, probably better resembles a game of darts than science-based medicine.

For more helpful tips on how to stay healthy naturally, be sure to check out NaturalMedicine.news.

You can also learn more about the dangers of flu shots by visiting FluShotNews.com.