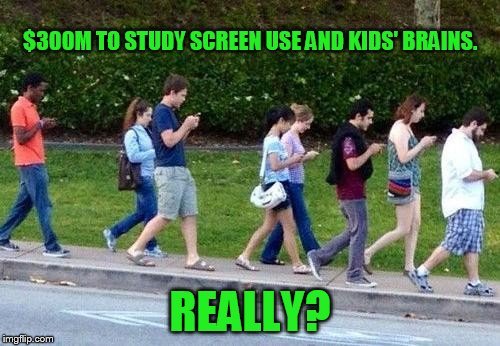 Activist Post and sister publication, Natural Blaze, have reported many times about research already proving that kids are being harmed by screen use and exposure.  We’ve also reported about concerns (sometimes desperate) about kids potentially being harmed by screen use and exposure.  And we’ve reported about how exposure to blue light and WiFi (wireless radiation) from screens and other sources of digital, electronic, and wireless technology is harmful to kids as well as adult humans, animals, and nature.

In fact, many media sources have reported about all of this before.  Last night, CBS 60 Minutes reported about a $300M federal study which has already indicated more bad news about kids’ brains and screen use.  Highlights include:

At 21 sites across the country scientists have begun interviewing nine and ten-year-olds and scanning their brains. They’ll follow more than 11,000 kids for a decade, and spend $300 million doing it. Dr. Gaya Dowling of the National Institutes of Health gave us a glimpse of what they’ve learned so far.

We’re sort of in the midst of a natural kind of uncontrolled experiment on the next generation of children.

Did you volunteer for your children to be part of an uncontrolled experiment?  Here’s what they know so far from their study:

That’s not comforting.  However, according to Dr. Dowling, until the study is completed, researchers won’t know for sure whether or not screen time is actually addictive or causing other harm.

Wow – ya think?  Maybe this is why Silicon Valley parents are increasingly freaking out about their own kids’ use and exposure to screens – even spying on their nannies.

Dr. Dimitri Christakis: In many ways, the concern that investigators like I have is that we’re sort of in the midst of a natural kind of uncontrolled experiment on the next generation of children.

Wow – another reference to this uncontrolled experiment on kids.

Dr. Dimitri Christakis at Seattle Children’s Hospital was the lead author of the American Academy of Pediatrics’ most recent guidelines for screen time. They now recommend parents, “avoid digital media use, except video chatting, in children younger than 18 to 24 months.”

Dr. Dimitri Christakis: So what we do know about babies playing with iPads is that they don’t transfer what they learn from the iPad to the real world, which is to say that if you give a child an app where they play with virtual Legos, virtual blocks, and stack them, and then put real blocks in front of them, they start all over.

Anderson Cooper: If they try to do it in real life, it’s as if they’ve never done it before.

Dr. Dimitri Christakis: Exactly. It’s not a transferable skill. They don’t transfer the knowledge from two dimensions to three.

Dr. Christakis has also done research that has confirmed that infants are more vulnerable to screen addiction than teenagers because “the experience of making something happen is so much more gratifying to them.”

Dr. Kara Bagot is an investigator on that $300 million NIH study. Her team is scanning teenager’s brains as they follow Instagram, the most popular social media app.

Based on her data and the results from other studies, Dr. Bagot is among scientists who believe screen time stimulates the release of the brain chemical dopamine, which has a pivotal role in cravings and desire.

Dr. Kara Bagot: So you’re more likely to act impulsively and use social media compulsively instead of, like, checking yourself.

Anderson Cooper: You want to keep on it to keep getting–

So screens must then be potentially addictive.

Teenagers now spend on average four and a half hours a day on their phones. All that time has resulted in a fundamental shift in how a generation of American kids acts and thinks.

Jean Twenge is a psychology professor at San Diego State University. She spent five years combing through four large, national surveys of 11 million young people since the 1960’s. She discovered sudden changes in the behavior and mental health of teens born in 1995 and later, a generation that she calls “I-gen”.

The iPhone was introduced in 2007. Smartphones gained widespread usage among young people by 2012. Jean Twenge says she was startled to find that in the four years that followed, the percentage of teens who reported drinking or having sex fell. But the percentage who said they were lonely or depressed spiked. It’s possible other factors may have played a role, but Twenge says she wasn’t able to identify any that correlated as closely as the growing popularity of the smartphone and social media.

Jean Twenge: It’s not just the loneliness and depression from these surveys. It’s also that ER visits for self harm like cutting have tripled among girls age 10 to 14.

60 Minutes has aired segments about this topic before.

Last night’s segment included more research results and, of course, that definitive answers won’t be available anytime soon.  This leads us back to those Silicon Valley parents.  If they aren’t waiting for definite research to desperately and fiercely protect their own kids from exposure to screens, shouldn’t all Americans – including the public schools systems – be trying to drastically reduce the amount of kids’ use and exposure to them?