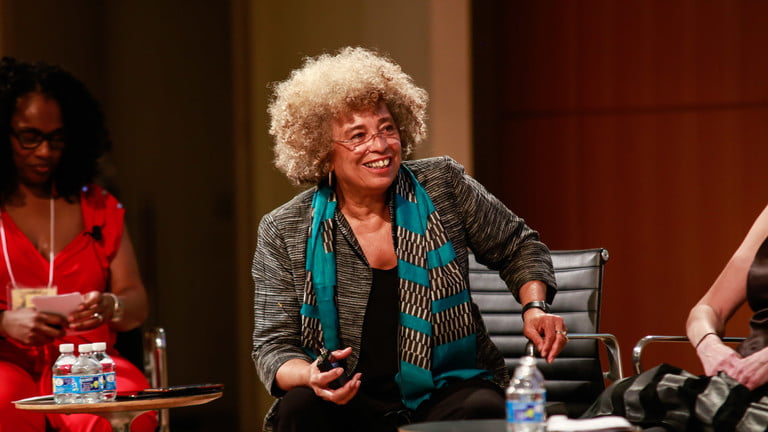 Three members quit the board of the Birmingham Civil Rights Institute after its controversial decision to first grant, then to rescind an award for iconic activist Angela Davis, following objections to her anti-Israel statements.

The gesture of protest came hours after Davis took to Facebook and called the retraction “not an attack against me but rather against the very spirit of the indivisibility of justice.”

The mass resignation is the latest step in a spiraling conflict that has torn apart a respected civil rights research center, and publicly humiliated Davis, who, at 74, remains an active campaigner and academic.

The scandal started innocuously enough in October, when the Alabama institute gave the former Black Panther and American communist party figurehead its biggest annual accolade, calling her “one of the most globally recognized champions of human rights, giving voice to those who are powerless to speak.”

There was no immediate pushback, and a “homecoming” for Birmingham-born Davis, who is professor emeritus at the University of California, was scheduled for next month.

As the date neared, organized dissent began to be heard. Online publication Southern Jewish Life wrote a 1,200-word editorial in December saying “there might be some indigestion at the [award-ceremony] dinner over this year’s honoree,”and detailing her consistent support of the Boycott, Divestment and Sanctions (BDS) campaign, which “isolates Israel.”

On January 2, the Birmingham Holocaust Education Center wrote a letter directly to the civil rights institute, expressing “concern and disappointment” at Davis being honored, while local celebrity, retired four-star Marine General Charles Krulak, an outspoken friend of Israel, also issued a public statement condemning Davis, through a member of the local Jewish community.

On January 4, the Birmingham Civil Rights Institute caved in, and issued a vague statement in which it said it had conducted a “closer examination” of Davis’ pronouncements, and concluded that she “does not meet all the criteria on which the award is based.”

This set off a new round of outrage – now from Davis supporters, and from the activist herself.

Saying that she is “passionately opposed to antisemitism” she explained that her work on behalf of “the Palestinian cause”was in its essence the same as the domestic struggle “against police violence, the prison industrial complex, and racism more broadly.”

“I have indeed expressed opposition to policies and practices of the state of Israel, as I express similar opposition to U.S. support for the Israeli occupation of Palestine and to other discriminatory U.S. policies,” she wrote.

David first made national headlines in 1970, when then-California Governor Ronald Reagan successfully demanded that she be terminated for her links with the communist party. She became a national celebrity just months later when guns she purchased were used for a fatal hostage taking by the Black Panthers in Marin County court.

The months-long massive manhunt and arrest of the person who President Richard Nixon called the “dangerous terrorist Angela Davis” was widely covered. During her trial, she was defended as a political prisoner, had an eponymous song written about her by John Lennon and Yoko Ono, and became perhaps the second most famous American in the Soviet Union, which campaigned worldwide for her release. She was eventually acquitted.

She subsequently ran for US vice president, and more recently has attracted renewed attention due to racial riots over purported police brutality, and a re-invigoration of the feminist movement under Donald Trump, having been chosen as the honorary co-chair of the Women’s March on Washington two years ago.

She said in her statement that she planned to attend an alternative event in Birmingham next month, organized for her by “those who believe that the movement for civil rights in this moment must include a robust discussion of all of the injustices that surround us.”