With the French prime minister now announcing coming draconian measures banning all protest, this is precisely the horrific scene that could begin to be repeated across France and the EU.

In total at least six people have died and over 1,400 people injured during the French protests, with thousands arrested weekly, according to international reports. Over the weekend some 50,000 protesters continued demonstrating in multiple cities, leading to significant clashes in Paris, Bordeaux and Rouen. A number of commentators have noted that though there appear fewer demonstrators compared to December, there appears a serious uptick in violent acts on the part of both demonstrators and police response.

The new Draconian law under consideration could make any demonstration illegal to begin with if not previously approved by authorities, in an initiative already being compared to the pre-Maiden so-called “dictatorship law” in Ukraine.

In the name of reigning in the violence that has recently included torching structures along the prestigious Boulevard Saint Germain in Paris, and smashing through the gates of government ministry buildings, the French government appears set to enact something close to a martial law scenario prohibiting almost any protest and curtailing freedom of speech. 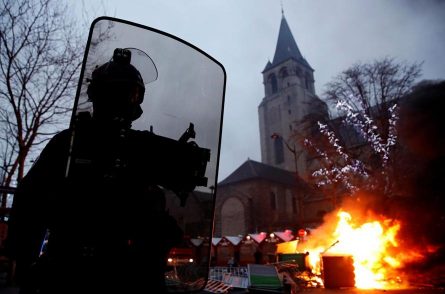 Prime Minister Edouard Philippe presented the new initiative to curtail the violence and unrest while targeting “troublemakers” and banning anonymity through wearing masks on French TV channel TF1 on Monday. He said the law would give police authority crack down on “unauthorized demonstrations” at a moment when police are already arresting citizens for merely wearing a yellow vest, even if they are not directly engaged in protests in some cases.

Philippe’s tone during the statements was one of the proverbial “the gloves are off” as he described the onus would be on “the troublemakers, and not taxpayers, to pay for the damage caused” to businesses and property.

“Those who question our institutions will not have the last word,” he added.

However, if anything the protests have grown fiercer in response to any police crackdown or violence against demonstrators. Should all protests be banned under the new law, it could be the start of more violent riots gaining steam, as what began Nov. 17 as anger over fuel tax hikes has now turned into rage at President Emmanuel Macron and policies that seem to favor the urban elite.

Other yellow vest inspired protests previously broke out across Europe, and in perhaps a sign of things to come a video from The Netherlands of a woman pushing her baby in a stroller being arrested by police apparently for merely wearing a yellow vest is going viral.

In the video, police confront the woman in what appears a quiet neighborhood far away from any visible protest. Police were photographed alongside the baby on the street as the mother was dragged away. 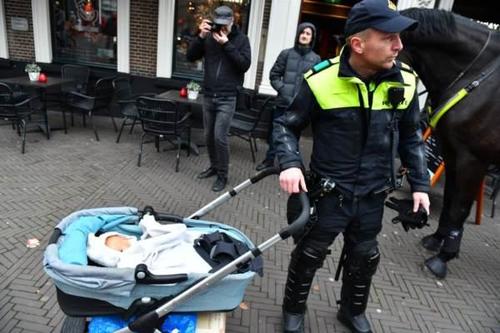 On Tuesday, the BBC reported:

Speaking on French TV channel TF1, Prime Minister Philippe said the government would support a “new law punishing those who do not respect the requirement to declare [protests], those who take part in unauthorized demonstrations and those who arrive at demonstrations wearing face masks”.

Moreover, the French state will ban activists—described as “known troublemakers”—from participating in demonstrations. In order to make identifying and singling out these activists more easy, the government will also outlaw face masks.

The protesters will face tougher penalties for taking part in undeclared demonstrations, covering their faces, and would be required to pay for the damage they cause, Philippe said on France’s TF1 television. More than 80,000 police officers will be mobilized nationwide for an expected fresh round of protests next Saturday, he said.

Budget Minister Gerald Darmanin urged the state to exercise “ultra-severity” against French citizens opposed to being fleeced and ignored.

For a former French minister, the only appropriate response by the state is murder. Luc Ferry has called for police to shoot and kill protesters attacking police.

Violence and murder are a reflexive response by the state when its authority is challenged and other tactics—for instance, demonizing protesters as either right or left extremists—fail to put an end to protests.

Nothing short of a police state will work to discourage further protests. The French government has plenty of experience along these lines, having declared a state of emergency on numerous occasions, most recently in 2015 after a series of terrorist attacks in Paris. France first implemented an état d’urgence in 1955 during the Algerian war. The law resulted in house arrests, censorship, searches, curfew, restrictions on public gatherings, and forbidding people from entering a defined area.

Shutting down protests, arresting activists, and even murdering them will not put an end to the Gilets Jaunes movement.

The French elite apparently suffer from amnesia. In the 1700s, the average French citizen spent half his or her wages on bread, thus leading to deadly bread riots and eventually the fall of the Bastille. The French ruling class, the monarchy, faced the guillotine in response to its neglect and parasitical behavior.