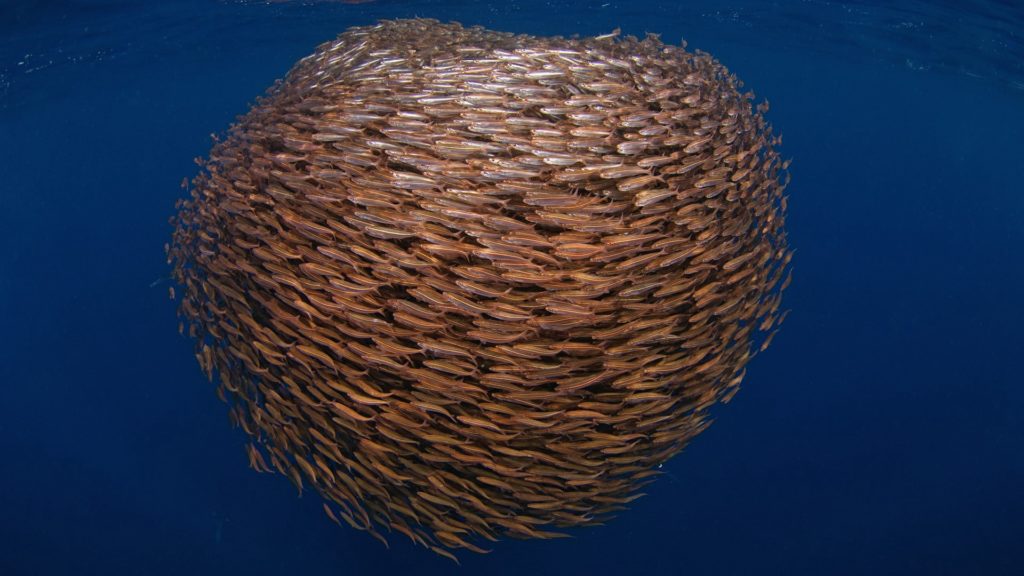 You don’t have to look very hard to see that the great theme of the 21st century so far is sudden, ruinous collapse. America, Britain, Europe — all teetering on the brink. But it’s hardly just countries in a political sense. The planet. A mass extinction of life itself. People’s sense of optimism and faith in the future imploding into nationalism, extremism, fascism. Trust, meaning, belonging, purpose. Bang! Everything, more or less, as far as you look, seems to be collapsing in on itself, as wide as you care to see. Why is that?

If collapse is the theme of this new century, then what’s really weird, strange, and remarkable is that when you really look at all these very different kinds of collapse, whether what’s imploding is economies, societies, minds, food chains, or ecosystems, it seems to follow a specific and characteristic pattern too. The glaciers melt from the bottom. The insects and bees and little fish and mammals are dying off first. The oceans are warming faster than the atmosphere. Economies are imploding because a new class of poor has grown — whether in America, Britain, or Europe. Do you see the pattern yet?

The general pattern of collapse in this new century is implosion from the bottom up. The bottom is chewed through, eviscerated, eaten away, depleted — until nothing is left — by the top. The middle therefore buckles and breaks. The top caves in, eventually, along with it. Whether we look at societies, economies, the planet, or food chains — this pattern of collapse is what seems to characterize now. Of course, I am only speculating, thinking out loud. You are welcome to disagree if you like. But I wonder if you don’t see a tiny grain of truth in what I am observing, too. The bottom is shredded — the middle falls in — the top implodes. Ravaged and depleted, the whole system, chain, organization collapses.

I read recently that some hedge fund baron from Chicago is buying up astonishingly expensive properties at a record pace — $250 million in Manhattan, $150 million in London, and so on. (Ironically, it’s a hedge against economic collapse). This is an example of collapse itself — the growth of the super rich, who have grown ultra wealthy by exploiting the poor, nature, the planet, democracy, and society. As all those things fade, the middle classes buckle and implode, and turn to extremism and fascism. Wham! The top falls in at last, too. Bottom-up collapse — this example is economic predation, one man earning billions from exploiting people, which goes on to have ruinous sociopolitical effects. But the same is true of what we are doing to the natural world, to life on the planet, and to ourselves more generally — runaway predation, savage exploitation, is depleting and ravaging all our systems, and causing them to collapse from the bottom up.

And this pattern of bottom-up collapse is accelerating at what seems to be a runaway pace, too. Whether inequality, climate change, or mass extinction — all these are growing, not shrinking, which tells us bottom-up collapse is quickening. Now, that raises certain questions. There are many kinds of collapse we could imagine. We might imagine collapse from the top down, from the middle out, or of all levels at once. Yet wherever we look, we see one very specific kind of collapse.

What could have caused this strange convergence, that the pattern seems to be much the same, wherever we look? If the pattern is easy to see, then I think the cause is, too. Let’s think about what bottom-up collapse really means.

Collapse of this kind means that we are undernourishing and impoverishing the weakest things around us. We are “overconsuming” them, in economic terms, and, conversely, “underinvesting” in them. Whether it’s insects, bees, glaciers, decent jobs, or social contracts — we seem to be rampaging through the all the things that are the most defenseless of all, until there is nothing of them left.

But that is exactly what capitalism and neoliberalism say we should do. Capitalism says we should use up everything for profit — more, more, more profit, in a kind of senseless dance of destruction. Neoliberalism, its handmaiden, says, a little more technically, sitting in the background like an emperor — you must never invest in anything. The goal and purpose of all human organization is never to invest, never to nourish, support, renew, only to consume, exploit, take, possess, own, abuse.

These systems, capitalism, a praxis, a way of practice, and neoliberalism, an ideology, a way of thinking, are what came to dominate the world entire, more or less. But because together capitalism calls for perpetual exploitation, to produce the mindless, ruthless maximization of profit at all costs — and neoliberalism calls for a total lack of investment in anything, whether hospitals, schools, jobs, retirement, not to mention ecosystems, glaciers, or insects. Wham! A catastrophic wave of bottom up collapse, which has spread through economies, societies, polities, nature, psychology, until, at last, there doesn’t seem to be anything left but collapse.

Let me give you a concrete example. Together, neoliberalism and capitalism call for austerity — the idea that societies should never invest in a single thing, that everything should be privatized, from hospitals to schools to parks. Now, wherever austerity has been tried, the result has been a kind of stunning, ruinous collapse. America — thirty years of austerity: bang! Trumpism. Britain: two decades of austerity — bang! Brexit. Europe: a decade of austerity: wham! Neo-fascism.

All these are examples of bottom-up collapse. Austerity impoverished the average person, beginning with the poorest, who then revolted, by toppling leadership. But by then the psychological damage was done — instead of supporting more investment, more cooperation, the average person had been seduced into becoming a nationalist, an extremist, a fanatic. These societies grew badly destabilized — and now they are paralyzed, teetering on the brink of epic historic ruin. If you think I exaggerate, see how the US government is still shut down, how neo-fascists are about to contest the EU elections, and how Brexit will produce a shock greater than a war or depression — but society still marches happily towards it.

And yet all this mirrors the collapse of food chains, glaciers, and oceans, too, in a way that’s impossible to unsee once you’ve seen it. Collapse from the bottom up. The insects die off first. The glaciers melt from the bottom. The oceans warm fastest. In society, the poor die off first. The most vulnerable are hit the hardest and impoverished the fastest. The inner mechanism of bottom up collapse is this: the most defenseless things — whether they’re animals, people, rivers, or rocks — are torn apart fastest and most ruthlessly. But the result is not prosperity and triumph. It is depletion. Ruin. Implosion.

But the vulnerable, defenseless bottoms of things are also their foundations. The foundations of the most basic things of all — of democracy, of peace, of water, of air, of life itself. What kind of a fool would eat through the roots of his own orchard, just because he can? But that is what we are doing, with our economics, societies, selves, and planet. When we deplete the bottoms of things, we are also eroding the foundations of things — and the problem is that we don’t often see this profound form of interdependence and interrelation yet.

That makes bottom up collapse is a strange thing, which is twisted upon itself. When we deplete the bottoms of systems, which are also their foundations, whether in natural systems, or human, socially-constructed ones, like economies — we unleash second and third order effects, which we don’t often anticipate. (Sure, people like you and me might point them out — but who’s listening to us?) Those effects are things like what happened in America and Britain — growing poverty didn’t lead to people making sensible choices, it led to people being blinded by rage. In just the same way, the collapse of insects and glaciers doesn’t just exist in a vacuum — the second and third order effects mean runaway extinctions, nonlinearities, accelerations, discontinuities.

And that brings me to you and me. Do you know how everyone feels so on edge these days? So anxious, so worried, so weary? Why is that? It is because the nonlinearities and sudden implosions of bottom-up collapse are largely unpredictable. We can say these things will happen — fascism, sudden climate catastrophe, ecocide, Brexits — but we can’t often say when. So a sense of grim uncertainty comes to dominate our lives. It is as if we know everything is going wrong — and we don’t have the power to stop it — yet we also don’t have the assurance of a date for the sudden end of the insects, the glaciers, this job, that gig, this democracy, that government. We only know it’s coming. That’s a traumatic psychology, my friends — it is one of hopelessness and powerlessness, and there are few things more painful and bruising to experience at a visceral, existential level, again and again, every day.

So what are we to do about all this? Shall we merely accept our powerlessness and helplessness? Not at all. To undo all this, I think we must begin at the beginning. We must see the pattern of bottom-up collapse that defines this new century — and understand what it really means. It means something like this.

A predatory attitude has come to rule us, an exploitative and abusive way of life that’s normalized, celebrated, and pursued, thanks to the ascendance of neoliberalism and capitalism, in which as long as I profit, everything else can go, quite literally, to hell. Perhaps even by you and I — we are only human, after all. Yet if we understand all that, then the solution — such as there is — also becomes a little clearer.

Our challenge now, in this new century, is this. Nourishing, replenishing, nurturing, renewing, endowing. What? Everything that we can. Everything from basic incomes to to trees to insects to glaciers to hospitals to schools to retirement to mountains and forests. Do you see how the theme of nourishment and replenishment is what flows through all our challenges, like a great laughing river, renewing a parched, weeping ocean?

To do that, we will have to create whole new systems of thought — reinvent stale, dead, foolish disciplines like economics, slightly less dead ones, like psychology. We will have to reimagine the kind of organizations that we make — will “corporations” and “banks” as we know them be capable of replenishing and nourishing a depleted, ravaged world — or do we have to reinvent those, first? We will have to alter the nature of “work” — so far, it basically means “how good you are at exploiting something or someone” — but it must come to mean “how good you are at nourishing and renewing something or someone.” And then we will have to change our social norms and values — and the attitudes they reflect — so that we prize and celebrate and reward the act of nourishment, not just more ruthless, violent predation.

Perhaps that sounds like a big challenge to you. It is, my friends, it is. What else do you think a whole new century is for?

3 thoughts on “The Age of Collapse – Why Everything’s Collapsing, and What to Do About It”