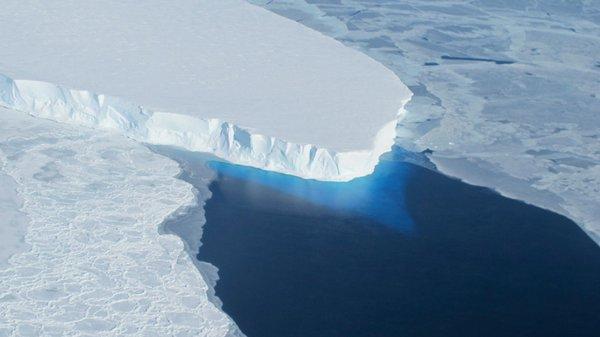 The following article is from the New York Times.   Another interesting presentation of possible fact and fiction.

The Thwaites Glacier on Antarctica’s western coast has long been considered one of the most unstable on the continent. Now, scientists are worried about the discovery of an enormous underwater cavity that will probably speed up the glacier’s decay.

The cavity is about two-thirds the area of Manhattan and nearly 1,000 feet tall, according to a study released Wednesday by NASA’s Jet Propulsion Laboratory. The hulking chamber is large enough to have contained about 14 billion tons of ice — most of which the researchers say melted in three years.

The Thwaites Glacier, which is about the size of Florida, holds enough ice that if it all melted, it would raise the world’s oceans by over two feet, a change that would threaten many coastal cities. Climate scientists tend to watch this glacier closely, usually alongside the nearby Pine Island Glacier, which is also flowing rapidly into the Amundsen Sea.

Rising sea levels, among the most obvious threats of global warming, are caused by the melting of ice sheets, as well as the thermal expansions of the ocean. A separate study released last week found that Antarctica was contributing more to rising sea levels than previously thought.

The Thwaites Glacier is one of the epicenters of this rapid deterioration. Already, the glacier is responsible for about 4 percent of the world’s rising sea levels, according to a NASA news release.

The size and shape of water-filled cavities like the one discovered play an important role in the melting of glaciers, said Pietro Milillo, the NASA study’s lead author. A cavity is created by relatively warm oceanwater melting the ice shelf. As the glacier becomes exposed to more warm-water currents, the ice will probably melt faster.

“This is the ocean eating away at the ice,” said Eric Rignot, an author of the study and a professor of Earth system science at the University of California, Irvine. “It’s a direct impact of climate change on the glacier.”

NASA’s study found that the ice shelf in that area melted at a rate of more than 650 feet per year between 2014 and 2017. That is enormous by Antarctica’s standards, Professor Rignot said.

Before the researchers collected this data, they had no idea the cavity existed, said Dr. Milillo, a radar scientist at the Jet Propulsion Laboratory. The first clues of the cavern’s existence were revealed about three years ago in data collected by NASA’s radar technology, which is flown above the glacier on airplanes and can penetrate deep below the surface of the ice.

Sridhar Anandakrishnan, a professor of geosciences and glaciology at Penn State who was not involved in the study, said that much of the area beneath glaciers’ ice sheets remains a mystery to scientists. But the size and shape of underwater cavities, including the detailed bumps and hollows in the ice, are important in forming accurate models for the rate at which glaciers are melting and will melt in the future.

Professor Anandakrishnan said in a phone interview that he returned this week from a monthlong expedition in Antarctica, where he spent time living on and studying the Thwaites Glacier. He lived in a tent and traveled part of the time on skis, studying the mystery of what lies beneath the ice.

“It’s flat and white and there’s nobody there,” he said of the glacier.

The gigantic cavity revealed in the study is at the junction between grounded and floating ice. It is shaped like an elongated irregular oval, not unlike the island of Manhattan.

There is still a lot more beneath the surface for scientists to understand, but studies like this have made headway, Professor Anandakrishnan said. That is because of improved tools for determining the physical properties beneath the ice, as well as a heightened urgency surrounding the melting glaciers in western Antarctica.

“We’re just now starting to get a handle on that complexity,” he said.