The arrest of Julian Assange not only puts the free press in the United States at risk, it puts any reporters who expose US crimes anywhere in the world at risk. As Pepe Escobar wrote

“Let’s cut to the chase. Julian Assange is not a US citizen, he’s an Australian. WikiLeaks is not a US-based media organization. If the US government gets Assange extradited, prosecuted and incarcerated, it will legitimize its right to go after anyone, anyhow, anywhere, anytime.”

The Assange prosecution requires us to build a global movement to not only free Julian Assange, but to protect the world from the crimes and corruption of the United States and other governments. The reality is that Freedom of Press for the 21st Century is on trial.

There are many opportunities for a movement to impact the outcome of this process and to free Julian Assange.  The extradition process includes political decisions by both the UK and US governments. Courts are impacted by public opinion. If courts are convinced this case is about political issues, extradition could be rejected.

Next Steps, Next Opportunities

Last week’s arrest begins the next phase of Assange’s defense as well as the defense of our right to know what governments do in our name. It may seem like this is now a matter only for the courts, but in fact, the prosecution of Assange is political. The extradition case is not a hacking case, as the US is trying to present it, it is a prosecution about exposing war crimes, corporate corruption of US foreign policy and other violations of law by the United States and its allies. The government is trying to change the subject to avoid the facts that Assange exposed.

In fact, the indictment does not even allege hacking. As Glenn Greenwald writes:

“the indictment alleges no such thing. Rather, it simply accuses Assange of trying to help Manning log into the Defense Department’s computers using a different username so that she could maintain her anonymity.”

“The factual allegations … boil down to encouraging a source to provide him information and taking efforts to protect the identity of that source. Journalists around the world should be deeply troubled by these unprecedented criminal charges.”

The extradition process is likely to last months, most likely more than a year. The Assange case could go into 2020 or beyond. Issues that could prevent extradition include Assange’s health conditions, human rights concerns, and whether there is a political motivation behind the US request. Not only can Assange appeal through the UK courts, but he may also appeal to the European Court of Human Rights.

While we should not limit our mobilizations to legal filings, hearings, appeals and administrative decisions, those are all opportunities to educate and mobilize people. The next court date on the extradition will be a preliminary hearing on May 2 where Assange will appear by video link.  Next, the United States must produce its case for requesting the extradition of Julian Assange from Britain by June 12.

“It may be years before Assange sees the inside of a US courtroom. The initial Swedish request to extradite Assange from the U.K. came in November 2010. Assange successfully slowed the process until June 2012.” 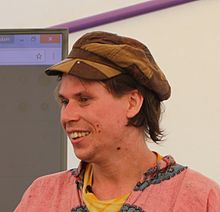 Lawfare also points to the case of Lauri Love (image on the right), who faced extradition for hacking US government computers. It took three years for the extradition case, and then Love raised health issues that would be impacted by a long sentence and  two years later, he won on appeal with the court ruling it would be “oppressive to his physical and mental condition.” Assange has also developed health issues over the last seven years of living in the Ecuadorian embassy.

Then, there is the case of another British hacker, Gary McKinnon (image below left) who was indicted in 2002. The extradition proceedings dragged on for a decade. In the end, then-Home Secretary Theresa May withdrew the extradition order because of McKinnon’s diagnosis of Asperger’s syndrome and depression:

“Mr. McKinnon’s extradition would give rise to such a high risk of him ending his life that a decision to extradite would be incompatible with Mr. McKinnon’s human rights.” 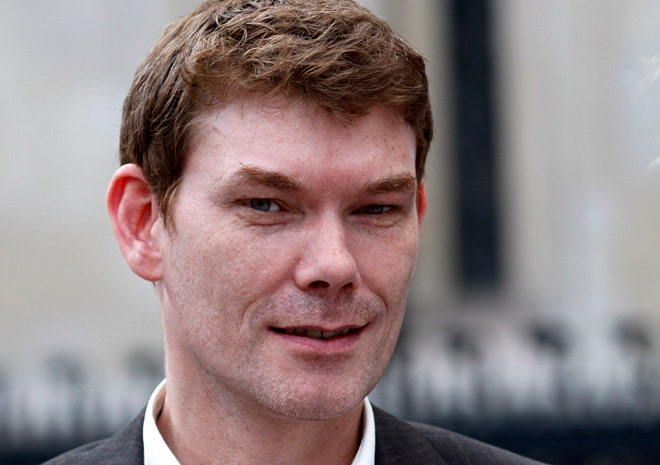 Someone cannot be extradited from the United Kingdom if the extradition is for “political purposes.” The US Department of Justice has tried to avoid the obvious politics of Assange’s case by alleging in the indictmentthat it is a hacking case. In reality, and everyone knows this reality, Assange is being prosecuted because he exposed war crimes including the wanton killing of journalists and civilians in Iraq and Afghanistan, the violation of human rights in Guantanamo Bay and the corruption of US foreign policy by transnational corporations. These are the big elephants in the room that the United States is trying to hide.

The US prison system is seen around the world as inhumane. The UN Committee against Torture issued a report strongly criticizing the US prisons on a number of issues, among them torture and the extensive use of solitary confinement. The US uses long-term solitary more than any other country in the world, on any given day, at least 80,000 people are held in solitary confinement in the US. Political prisoners have been held in long-term solitary confinement as demonstrated by the imprisonment of black liberation activists who were held in solitary for decades. And whistleblowers have been held in solitary as was Chelsea Manning during her prosecution, including her most recent incarceration for refusing to testify before the grand jury investigating Assange. The European Court of Human Rights has prevented extradition to the US from the UK in a case involving an alleged terrorist because of inhumane prison conditions.

The US put forward a flimsy indictment that even on its face did not prove the allegation of assisting Manning with the password to access secret documents. The US put forward this weak and relatively mild charge probably to make extradition easier. They sought to avoid the political issue, which could have stopped the extradition. But, they are skirting extradition law with this approach, and if they hit Assange with a superseding indictment when he is extradited, it would be a violation of the doctrine of specialty, which means a person can only face trial for offenses presented to justify that extradition.

The Politics of the Assange Prosecution

The reality of the Assange prosecution being about his journalism is obvious to all. Those in the media making the claim that this is about hacking, know they are stretching the truth in order to side with the US government. People should know media that make this claim cannot be trusted to report the truth.

The editor of White House Watch, Dan Froomkin, pulls the thin veil off of this lie writing:

“Julian #Assange has been charged with conspiracy to commit journalism. The free press has not ducked a bullet here; it’s taken one to the chest.”

The Assange prosecution is about the criminalization of journalism. The Committee to Protect Journalists writes, the indictment would “criminalize normal journalistic activities.” This obvious truth will become more evident as the case proceeds and the movement educates the public and mobilizes support to free Assange.

Already, in USA Today, Jonathan Turley clarified what the prosecution is really about:

“WikiLeaks founder Julian Assange will be punished for embarrassing the DC establishment.”

The “embarrassment” really is committing crimes that in an effective international judicial system would result in prosecution of US officials and members of the US military who committed them. And in a US justice system that sought justice, there would have been prosecutions of members of the military for torture and of lawyers providing legal cover for these actions.

The US election season is upon us and this presents opportunities for mobilization and making Assange’s case an election issue. One presidential candidate seeking the Democratic nomination, Tulsi Gabbard, has already come out against extradition. More candidates need to be urged to oppose extradition.

Candidates can be pressured from outside the Democratic Party as well. Green candidate, Howie Hawkins already wrote that he opposes extradition and urges people to defend Freedom of the Press. Hawkins is in the exploratory phase of a potential campaign. The Green Party has also published a statement that “unequivocally condemns the arrest of Julian Assange and calls for his immediate release.”

President Trump has kept his options open. Trump said in the Oval Office, that he “knows nothing” about the prosecution and “It’s not my thing.” Sean Hannity, a Trump media cheerleader has offered to let Assange host his show and reach his 15 million viewers. Assange is a wedge issue that divides Trump loyalists.

If the movement does its job and builds a national consensus against the prosecution of a publisher for reporting the truth, Trump may side with those in his voting base that are against extradition; and the leading Democratic candidates may also come out against prosecution and stand for freedom of the press that reports crimes of the US government.

In the United Kingdom, politics are in flux as well. While the next election is scheduled for 2022, the government is ever closer to being forced to hold an election as it is trapped in a Brexit quandary and showing its inability to govern. Jeremy Corbyn has already said,

“The extradition of Julian Assange to the US for exposing evidence of atrocities in Iraq and Afghanistan should be opposed by the British government.”

Diane Abbott, the Shadow Home Secretary, said Assange should not be extradited:

“It is this whistleblowing into illegal wars, mass murder, murder of civilians and corruption on a grand scale, that has put Julian Assange in the crosshairs of the US administration.” 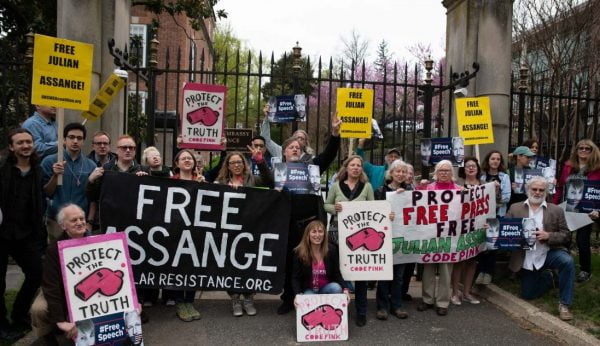 Free Assange protest outside of British Embassy in Washington DC from News2Share.com

At least five times, the UN, through various committees and special rapporteurs, has called on Assange not to be prosecuted or extradited to the United States. A campaign to stop the prosecution of Assange will build into a global movement because the US has created chaos and havoc around the world, and has killed more than a million people this century and made many millions into refugees.

Protests occurred immediately on the day Assange was arrested and continued this weekend. We have started a campaign to Free Assange. As people understand the dramatic implications of this prosecution, protests will grow. Daniel Ellsberg described this unprecedented prosecution as a threat to the future of the republic and said it was time “to join ranks here now to expose and resist the wrongful–and in this country unconstitutional–abuse of our laws to silence journalists.”

In court, Assange showed his defiance of the national security state, which seeks to destroy him, by sitting calmly in the dock, reading Gore Vidal’s ‘History of the National Security State’ and holding it up obviously to give everyone in court a view.  We must be in solidarity with that defiance and build the campaign that is needed to free Julian Assange.