Prepare For Change
Home ARCONTES The Weakening Of Earth’s Magnetic Field Has Greatly Accelerated, And That Could... 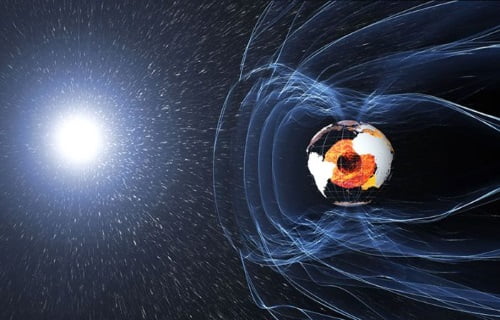 Earth’s magnetic field is getting significantly weaker, the magnetic north pole is shifting at an accelerating pace, and scientists readily admit that a sudden pole shift could potentially cause “trillions of dollars” in damage.  Today, most of us take the protection provided by Earth’s magnetic field completely for granted.  It is essentially a colossal force field which surrounds our planet and makes life possible.  And even with such protection, a giant solar storm could still potentially hit our planet and completely fry our power grid.  But as our magnetic field continues to get weaker and weaker, even much smaller solar storms will have the potential to be cataclysmic.  And once the magnetic field gets weak enough, we will be facing much bigger problems.  As you will see below, if enough solar radiation starts reaching our planet none of us will survive.

Previously, scientists had told us that the magnetic field was weakening by about 5 percent every 100 years.

It’s well established that in modern times, the axial dipole component of Earth’s main magnetic field is decreasing by approximately 5% per century. Recently, scientists using the SWARM satellite announced that their data indicate a decay rate ten times faster, or 5% per decade.

If the rate of decay continues at this pace, or if it speeds up even more, we could be looking at a mass extinction event that is beyond what most people would dare to imagine.

As more solar radiation reaches Earth, we would expect to see a rise in cancer rates, and this is something that even National Geographic has acknowledged…

However, if the magnetic field gets substantially weaker and stays that way for an appreciable amount of time Earth will be less protected from the oodles of high-energy particles that are constantly flying around in space. This means that everything on the planet will be exposed to higher levels of radiation, which over time could produce an increase in diseases like cancer, as well as harm delicate spacecraft and power grids on Earth.

Of course we are already seeing this.  Cancer rates have been rising all over the world, and if you live in the United States there is a one in three chance that you will get cancer in your lifetime.

What is The Lost Book of Remedies? The Lost Book of Remedies PDF contains a series of medicinal and herbal recipes to make home made remedies from medicinal plants and herbs. Chromic diseases and maladies can be overcome  by taking the remedies outlined in this book. The writer claims that his grandfather was taught herbalism and healing whilst in active service during world war two and that he has treated many soldiers with his home made cures.

But as the magnetic field continues to weaken, things will get worse.

The weaker the magnetic field gets, the amount of solar radiation that will reach us will rise, and eventually it would get so bad that the entire human race would be in jeopardy.  The following comes from Futurism…

Radiation and cosmic rays are a real concern for NASA, especially when it comes to long-term spaceflight.  Astronauts on a mission to Mars could undergo up to 1000 times the exposure to radiation and cosmic rays that they would get on Earth.  If Earth’s magnetic field disappeared, the entire human race – and all of life, in fact –  would be in serious danger.  Cosmic rays would bombard our bodies and could even damage our DNA, increasing worldwide risk of cancer and other illnesses.  The flashes of light visible when we close our eyes would be the least of our problems.

And even if some of us found a way to survive underground for a while, we still wouldn’t be able to survive because solar winds would strip away our planet’s atmosphere and oceans…

So could such a scenario actually happen?

Well,  some scientists are saying that our magnetic field “could be gone in as little as 500 years”, but they are telling us not to worry because Earth’s magnetic poles will “flip” and things will eventually return to normal…

The magnetic field surrounding Earth is weakening, and scientists say it could be gone in as little as 500 years.

The result? Earth’s magnetic poles could, literally, flip upside down.

Of course most scientists believe that a pole flip takes hundreds or thousands of years to happen, but they don’t actually know because they have never seen one take place.

Storms far less powerful than these could cause much more damage if they happened to hit while Earth’s magnetic field was in the midst of a reversal, Roberts said. The result would likely be trillions of dollars in damage to our electrical infrastructure, and right now, there’s no plan for dealing with an event of that magnitude.

“Hopefully, such an event is a long way in the future and we can develop future technologies to avoid huge damage,” Roberts concluded. Keep your fingers (but not your magnetic-field lines) crossed.

Most of the experts also believe that a pole flip is still a long way off, but what everybody agrees on is that the magnetic north pole is moving toward Russia at an accelerating pace…

But what’s really catching attention is the acceleration in movement. Around the mid-1990s, the pole suddenly sped up its movements from just over 9 miles (15 kilometers) a year to 34 miles (55 kilometers) annually. As of last year, the pole careened over the international date line toward the Eastern Hemisphere.

And earlier this year, authorities had to issue an emergency update to global positioning systems because “the magnetic field is changing so rapidly”…

The most recent version of the model came out in 2015 and was supposed to last until 2020 — but the magnetic field is changing so rapidly that researchers have to fix the model now. “The error is increasing all the time,” says Arnaud Chulliat, a geomagnetist at the University of Colorado Boulder and the National Oceanic and Atmospheric Administration’s (NOAA’s) National Centers for Environmental Information.

I know that I must sound like a broken record by now, but this is important.  Our planet is becoming increasingly unstable, and we are seeing things happen that we have never seen before.

Everyone agrees that the Earth’s magnetic field is rapidly getting weaker, and that is making us more vulnerable with each passing day.

Most of the experts are trying to put a happy face on things and are assuring us that everything is going to be okay.

Hopefully they are right, but I wouldn’t count on it.