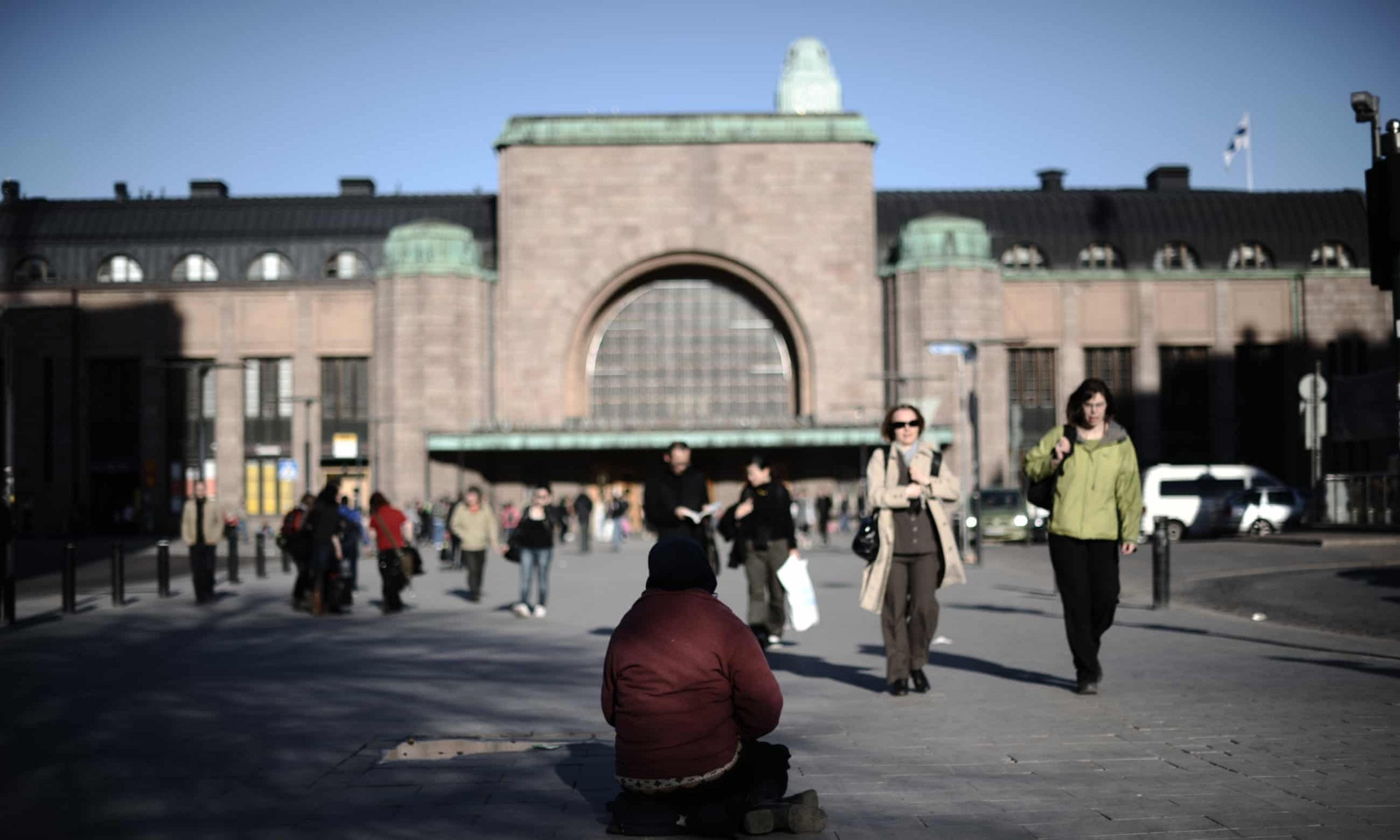 Finland is the only EU country where homelessness is falling. Its secret? Giving people homes as soon as they need them – unconditionally 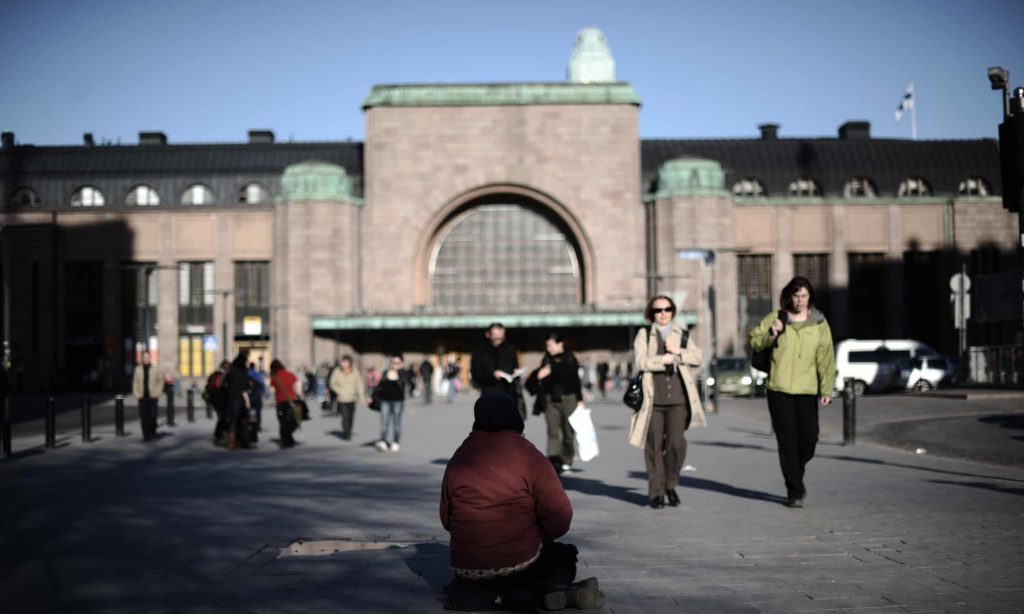 Tatu Ainesmaa turns 32 this summer, and for the first time in more than a decade he has a home he can truly say is his: an airy two-room apartment in a small, recently renovated block in a leafy suburb of Helsinki, with a view over birch trees.

“It’s a big miracle,” he says. “I’ve been in communes, but everyone was doing drugs and I’ve had to get out. I’ve been in bad relationships; same thing. I’ve been on my brother’s sofa. I’ve slept rough. I’ve never had my own place. This is huge for me.”

Downstairs in the two-storey block is a bright communal living and dining area, a spotless kitchen, a gym room and a sauna (in Finland, saunas are basically obligatory). Upstairs is where the 21 tenants, men and women, most under 30, live.

It was clear to everyone the old system wasn’t working. We needed radical change

It is important that they are tenants: each has a contract, pays rent and (if they need to) applies for housing benefit. That, after all, is all part of having a home – and part of a housing policy that has now made Finland the only EU country where homelessness is falling.

When the policy was being devised just over a decade ago, the four people who came up with what is now widely known as the Housing First principle – a social scientist, a doctor, a politician and a bishop – called their report Nimi Ovessa (Your Name on the Door).

“It was clear to everyone the old system wasn’t working; we needed radical change,” says Juha Kaakinen, the working group’s secretary and first programme leader, who now runs the Y-Foundation developing supported and affordable housing.

“We had to get rid of the night shelters and short-term hostels we still had back then. They had a very long history in Finland, and everyone could see they were not getting people out of homelessness. We decided to reverse the assumptions.”

As in many countries, homelessness in Finland had long been tackled using a staircase model: you were supposed to move through different stages of temporary accommodation as you got your life back on track, with an apartment as the ultimate reward.

With state, municipal and NGO backing, flats were bought, new blocks built and old shelters converted into permanent, comfortable homes – among them the Rukkila homeless hostel in the Helsinki suburb of Malminkartano where Ainesmaa now lives.

Housing First’s early goal was to create 2,500 new homes. It has created 3,500. Since its launch in 2008, the number of long-term homeless people in Finland has fallen by more than 35%. Rough sleeping has been all but eradicated in Helsinki, where only one 50-bed night shelter remains, and where winter temperatures can plunge to -20C.

The city’s deputy mayor Sanna Vesikansa says that in her childhood, “hundreds in the whole country slept in the parks and forests. We hardly have that any more. Street sleeping is very rare now.”

In England, meanwhile, government figures show the number of rough sleepers – a small fraction of the total homeless population – climbed from 1,768 in 2010 to 4,677 last year (and since the official count is based on a single evening, charities say the real figure is far higher).

But Housing First is not just about housing. “Services have been crucial,” says Helsinki’s mayor, Jan Vapaavuori, who was housing minister when the original scheme was launched. “Many long-term homeless people have addictions, mental health issues, medical conditions that need ongoing care. The support has to be there.”

At Rukkila, seven staff support 21 tenants. Assistant manager Saara Haapa says the work ranges from practical help navigating bureaucracy and getting education, training and work placements to activities including games, visits and learning – or re-learning – basic life skills such as cleaning and cooking.

“A lot of it is really about talking,” says Henna Ahonen, a trainee social worker. And that is “easier when you are actually doing something together, rather than in a formal interview”, Haapa says. “The connection is just … easier. You can spot problems more readily.”

Hardly any of the tenants come straight from the street, Haapa says, and those who do can take time to adjust to living indoors. But after a three-month trial, tenants’ contracts are permanent – they can’t be moved unless they break the rules (Rukkila does not allow drug or alcohol use; some other Housing First units do) or fail to pay the rent.

Some stay seven years or more; others leave after one or two. In 2018, six tenants moved out to lead fully independent lives, Haapa says. One is now a cleaner, living in her own flat; another studied for a cookery qualification during his five years at Rukkila and now works as a chef.

Ainesmaa is on a two-year work experience programme designed to lead to a job. He says the opportunity to sort himself out was priceless: “Look, I own nothing. I’m on the autism spectrum. I think people are my friends, and then they rip me me off. I’ve been ripped off … a lot. But now I have my place. It’s mine. I can build.”

Housing First costs money, of course: Finland has spent €250m creating new homes and hiring 300 extra support workers. But a recent study showed the savings in emergency healthcare, social services and the justice system totalled as much as €15,000 a year for every homeless person in properly supported housing.

Interest in the policy beyond the country’s borders has been exceptional, from France to Australia, says Vesikansa. The British government is funding pilot schemes in Merseyside, the West Midlands and Greater Manchester, whose Labour mayor, Andy Burnham, is due in Helsinki in July to see the policy in action.

But if Housing First is working in Helsinki, where half the country’s homeless people live, it is also because it is part of a much broader housing policy. More pilot schemes serve little real purpose, says Kaakinen: “We know what works. You can have all sorts of projects, but if you don’t have the actual homes … A sufficient supply of social housing is just crucial.”

And there, the Finnish capital is fortunate. Helsinki owns 60,000 social housing units; one in seven residents live in city-owned housing. It also owns 70% of the land within the city limits, runs its own construction company, and has a current target of building 7,000 more new homes – of all categories – a year.

It has invested heavily, too, in homelessness prevention, setting up special teams to advise and help tenants in danger of losing their homes and halving the number of evictions from city-owned and social housing from 2008 to 2016.

“We own much of the land, we have a zoning monopoly, we run our own construction company,” says Riikka Karjalainen, senior planning officer. “That helped a lot with Housing First because simply, there is no way you will eradicate homelessness without a serious, big-picture housing policy.”

Finland has not entirely solved homelessness. Nationwide, about 5,500 people are still officially classified as homeless. The overwhelming majority – more than 70% – are living temporarily with friends or relatives.

But public-sector planning and collective effort have helped ensure that as a way to reduce long-term homelessness, Housing First is a proven success. “We’re not there yet, of course,” says Vesikansa. “No model is perfect; we still have failures. But I’m proud we had the courage to try it.”

The mayor agrees. “We have reduced long-term homelessness by a remarkable amount,” he says. “We must do more – better support, better prevention, better dialogue with residents: people really support this policy, but not everyone wants a unit in their neighbourhood … But yes, we can be very proud.”

Are These Chemicals Part of a Depopulation Agenda?