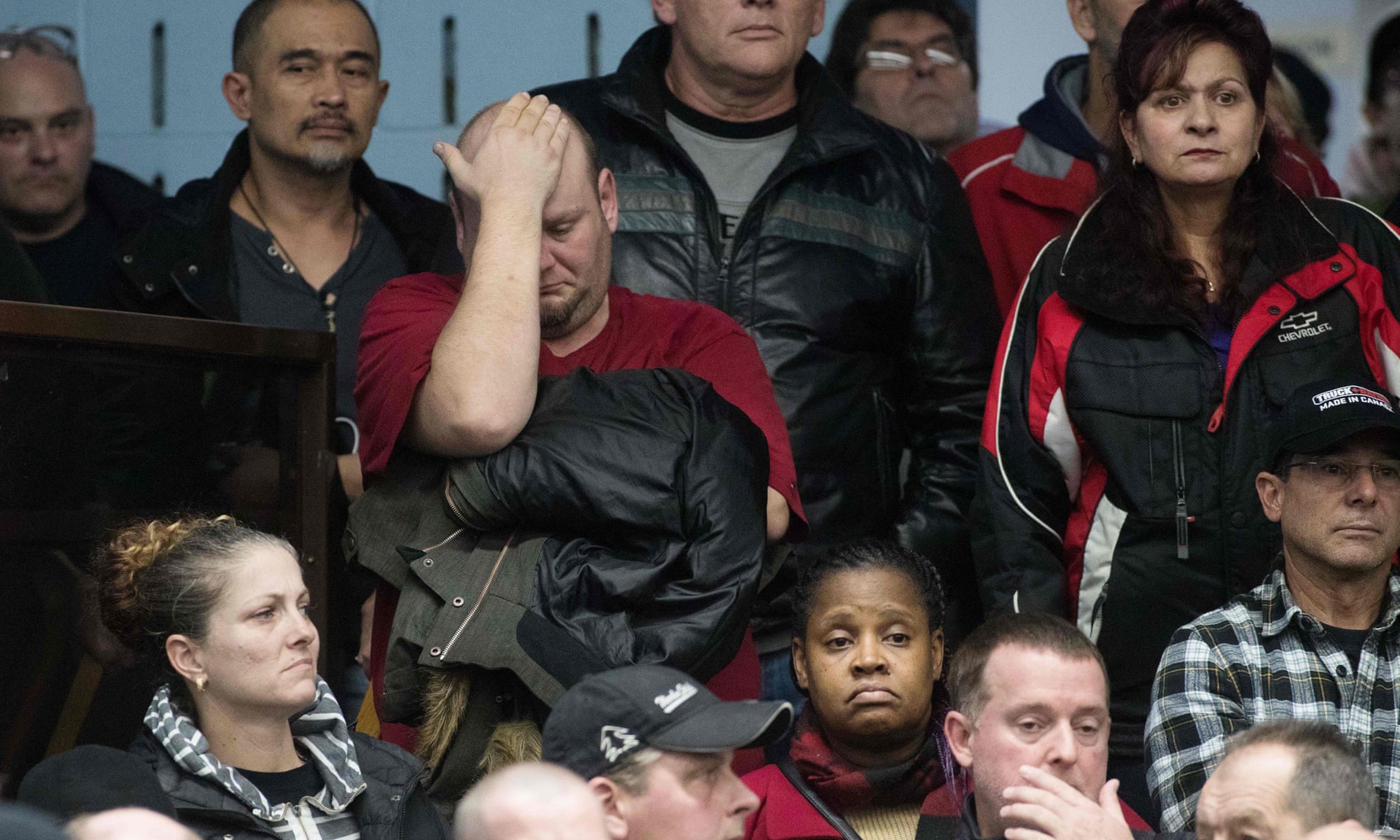 AT&T, General Motors and Wells Fargo vowed to use tax cuts to create jobs. In fact, they did the opposite 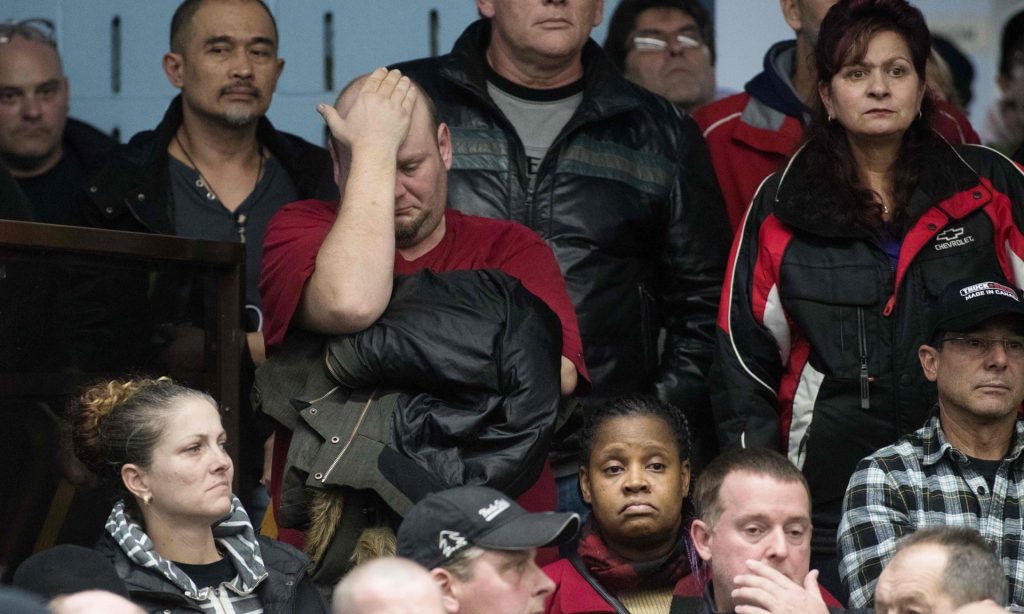 A union member reacts as union leaders speak in Oshawa, Ontario. General Motors announced it was closing five plants in the US and Canada, costing more than 14,000 jobs. Photograph: Lars Hagberg/AFP/Getty Images

Stephen Smith worked at an AT&T call center in Meriden, Connecticut, for over 20 years before the giant telecoms company announced it was closing the city’s three call centers in February 2019.

“At 46 years old, I’m looking for a new job,” Smith said. “They basically told us we either need to move south or lose our job. It was out of the blue. We had no idea.”

Smith and about 90 of his colleagues were offered severance packages or the option to relocate to Georgia or Tennessee. But for most workers who have spouses with their own careers, elderly parents nearby in need of care, or children still in school, relocating on a whim isn’t an option.

These sudden mass layoffs have become increasingly common for workers at AT&T and many other big firms. But it was not meant to be that way.

AT&T’s CEO, Randall Stephenson, promised in November 2017 to invest $1bn in capital expenditure and create 7,000 new jobs at the company if Trump’s hugely controversial tax cut bill passed. Many opponents had slammed the cuts as a corporate giveaway that benefited the super-rich. But big firms lobbied for it, saying – as AT&T did – that it would fund job-creating expansions.

The bill was voted into law in December 2017, reducing the corporate tax rate from 35% to 21%. AT&T’s benefit was a tax windfall of $21bn and an additional estimated $3bn annually. But instead of creating jobs and increasing investment into the company, AT&T has eliminated 23,328 jobssince the tax cut bill was passed, according to a recent report by the Communications Workers of America. The CWA also said AT&T reduced their capital investments by $1.4bn.

“The promises that were made from that legislation have not been fulfilled,” said Betsy Lafontaine, an AT&T call center employee in Appleton, Wisconsin, for nearly 30 years who was laid off after her center was shut down in March 2019.

An AT&T representative told the Guardian: “We continue to hire in areas where we’re seeing increasing demand for products and services, but technology is changing rapidly and that affects hiring and employment. There are fewer jobs in parts of the business that are declining and facing technology shifts.”

AT&T is among several large corporations whose CEOs announced support of the Trump tax cut bill by claiming if the legislation passed, their companies would ensure workers reaped benefits from it. But a report published on 22 May by the Congressional Research Service, a non-partisan thinktank for members of Congress, found the tax cuts did not significantly affect the economy or boost wages, but benefited investors more than anyone else.

“The evidence continues to mount that the Trump-GOP tax cuts were a scam, a giant bait-and-switch that promised workers big pay raises, a lot more jobs and new investments, but they largely enriched CEOs and the already wealthy,” said Frank Clemente, executive director of Americans for Tax Fairness.

He noted only 4% of the US workforce saw any sort of pay increase or bonus from the tax cuts. Meanwhile, data collected by ATF shows corporations have cut thousands of jobs since the tax cuts were passed, while using tax windfalls to buy back $1tn of their own stock, which primarily benefits corporate executives and wealthy investors since half of all Americans own no stock.

General Motors’ CEO, Mary Barra, was one of Trump’s economic advisers on tax reform, and the company vocally supported working with the Trump administration on tax reform “that is beneficial to the US economy, beneficial to US manufacturing and creates jobs”.

In November 2018, GM announced it would cease operations at five plants in Michigan, Ohio, Maryland and Ontario, Canada, resulting in the loss of more than 14,000 jobs in those communities. As GM is closing plants, the company has spent $10bn since 2015 on stock buybacks, and made a net profit of over $8bn despite paying no federal taxes in 2018. GM reported a tax windfall of $157m in the first three months of 2018 due to the Trump tax cut.

Daniel Adams worked at the General Motors plant in Lordstown, Ohio, for more than 25 years and is one of hundreds of workers faced with either being forced to uproot and relocate their families to continue employment at GM, or hope the company will cut a deal with the UAW union to reopen the plant.

“It’s like having a gun to your head,” Adams said. “They’re not only hurting workers, they’re hurting families.”

A GM representative said: “In November, we announced that four US plants would be on ‘unallocated status’ (meaning they don’t have a product assigned to them). The largest of the affected plants was our Lordstown Complex, which built compact sedans. We took the action because consumer demand has been rapidly shifting away from sedans and toward crossovers and trucks.”

Wells Fargo, the fourth largest bank in the US by assets, tied a minimum wage increase of $15 an hour to the Trump tax cuts and pledged increased investments in workers. The company is estimated to save $3.7bn annually due to the Trump tax cut. The bank’s 2018 tax savings were 47 times morethan the costs of its minimum wage increases. Rather than invest in its workforce, Wells Fargo bought back 350m shares in early 2018, worth about $22.6bn, increased CEO salary by 36%, and announced plans in September 2018 to eliminate at least 26,000 jobs in the US over the next three years as many of those positions are being sent overseas.

“Nobody here saw any of that benefit; if anything, quite the opposite. They changed our healthcare plans in 2019, so the costs for everyone went up, the costs for prescriptions went up,” said Mark Willie, a Wells Fargo office employee in Des Moines, Iowa. “We need a voice because we’re often forgotten about in pursuit of profits, and that’s evident with the jobs being sent overseas.”

Wells Fargo said: “Savings from tax reform enabled Wells Fargo to further invest in our team members and communities. We have raised the minimum US hourly pay rate to $15 per hour, increased philanthropic support by 55% in 2018 to $444m, and we will target 2% of our after-tax profits for corporate philanthropy.”