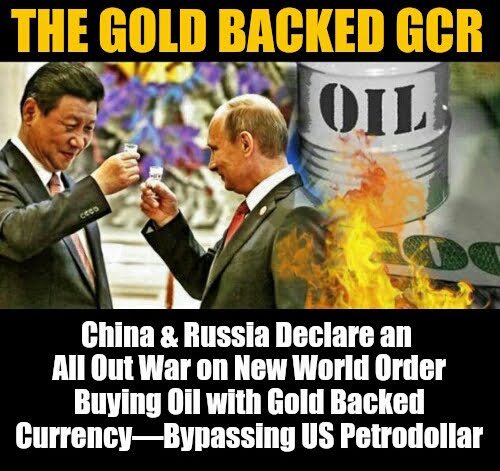 Let’s talk about the GCR, the Global Currency Reset.

When they say you must build your home on a solid foundation do you think of sand or do you think of a concrete foundation that is not going to erode and wash away. Have you not built a sand castle and then see the tide come in and wash it away? If you had dug down and formed a foundation and poured concrete you would see that it would withstand the rising tide and not get washed away. Now if you wanted to build a large high-rise building, you would dig down to bedrock and build your foundation from there. Then you could rest assured that the foundation is solid and you could build a large high-rise building that is secure.

It is the same way with currency.

Even if, let’s say, Zimbabwe, used all of its assets, which are huge, to back its currency, would that secure their currency over time? They have already tried and it failed.

A better course would have been to mine their gold and form it into billion bricks and put it away somewhere safe to back their currency. But they didn’t. They created Bearer Bonds backed by their assets to create value in their currency. These Bonds were useless the day they were issued. They had no reserves of currency to pay the Bonds when a bearer presented the Bond for redemption. The whole process was a scam on the people and the people saw through it. So did the International market place which put sanctions on Zimbabwe.

Their assets were effectively frozen because there was a huge liability on the assets, placed there by the Reserve Bank of Zimbabwe by using the Zim Bonds as currency. But going back in time if they had taken the time to mine the gold and sell it on the gold market, they would have had the money to run the country. But they tried the quick fix and bonded their currency using their assets to secure the Bonds. Do you think that course of action, using assets to back currency, created value in their currency? It was a disaster.

Couple that disaster with a corrupt government and the people are the ones that suffered. The people were tormented greatly and they have not yet recovered with millions of Zimbabweans killed under the Mugabe dictatorship. Their present President was number two in Mugabe’s government and has a lot of blood on his hands.

The Zim Bonds, we hold act like a liability for the country. If I took a ten trillion dollar note to Zimbabwe and presented it at the RBZ for redemption as the bearer of the Bond, they would have to give me a license to mine the gold or rare earth minerals, etc. in order to sell the asset to get the note redeemed. Are they prepared for thousands of people mining for gold indiscriminately all over the Zimbabwean landscape trying to redeem their bearer bonds secured by the country of Zimbabwe’s assets? Do assets work to back currencies? NO!!! ONLY GOLD DOES !

Get a grip on reality. There is no security in asset-backed currency. Nixon took The USA off the Gold Standard with the whisk of a pen and all security for our USD was gone. Even if we did have gold left to back our currency it was not going to be used. The U.S. Government then used an oil agreement with the Arabs to back the currency to create value. Any nation that wanted to buy oil had to exchange their currency to USD so they could buy the oil. The Petrodollar was born.

There was a profit incentive to charge fees to exchange currencies back and forth which was just another way to steal money out of the economy. Asset-Backed? Bull-pucky!!!

There is no security in any currency backed by assets. Period!!! Mine your asset, put it in a secure vault and then use it to back your currency, at least it could have the semblance of security for one’s currency. However, that will never happen because of The Central Bank System; it is a fraud. It creates money back by ‘thin air’; it’s call Fiat,

Another Bull-pucky attempt is to establish value for a countries currency by equating it to the Gold that a country owns. It is ludicrous for the same reasons as above. So, if a country has huge oil reserves but they don’t have gold, is their currency of less value than a country that has a lot of gold. Have you tried to burn gold to run your car? Have you tried to burn gold in your furnace to keep you warm? Whoever came up with that cockamamie idea needs to go back to the 4th or 5th grade and learn what constitutes value. If you’re going to try to pull one over on us, at least make it reasonable or sensible. That one fails the test miserably.

Now, there is a way to use Gold to back a currency. Gold Backed Currency in the QFS means there is an electronic gold certificate that refers back to a brick of gold bullion that has an identifying serial number on it that sets it aside from the other bricks that have their own serial number on them. The Gold bricks are set aside in a safe impenetrable place. To establish un-erodible value, that Gold Certificate then refers back to the Gold Bullion Brick.This means it is GOLD BACKED BY AN IDENTIFIED PIECE OF GOLD. The electronic certificate is transferred from one account to another whenever funds need to be transferred. When one wants to transfer $100, it is 100 electronic gold certificates that are transferred electronically while the gold backing the $100 is still in the vault. THIS IS GOLD BACKED CURRENCY THAT CREATES VALUE IN THE CURRENCY AND THERE IS NO OTHER WAY.

The word “Asset-Backed” should never be used in the same sentence as Gold Backed. It doesn’t belong there. It is inaccurate and when it is done it is done by one who is ignorant of true Gold Backed currencies that are used in the Quantum Financial System.

When the QFS is turned on and the old Central Bank, the convoluted financial system is unplugged, the QFS will be the only electronic system we will have. The Central Banking system will be gone, dumped in the trash to never be functional again.

When you see an Intel report that does not include information consistent with the QFS and the Gold Backed currency, know that it refers to the old Fiat Cabal System that has absolutely nothing to do with the QFS…ANDthat this Intel is the Disinformation being bandied about by unknowing ignorant persons or by unscrupulous trolls.

Become a Purest in your QFS knowledge because all exchanges and all redemption funds will be put in the QFS that will only deal with Gold Back currencies. In the GCR all currencies in the world will be reset with Gold Backed currencies for each country and will be on par value with each other; and that my friends, is the Global Currency Reset. The IMF, the World Bank and the Bank of International Settlements (BIS) along with all Central Banks, areelements of the old Cabal fiat system and have absolutely nothing to do with the GCR or the RV that sets humankind free.

The IMF will not be part of the Iraqi revaluation. If it was, the revaluation would never happen. They are Cabal. They may be repurposed in the future, but that’s another story. If the Intel doesn’t support this understanding then dismiss it, and dismiss any prognostications as well.

It is just disinformation. It could be Military Deception meant for the Cabal Operatives and is not meant for us.

We will wake up one day and the RV information will be given without any prior notice or set up. It will be a very pleasant & welcomed surprise. Then you can believe in it and set up your appointments and get Redeemed in person.

I pray all good people will stay the course and not allow themselves to be bamboozled by any disinfo; let the plan play out! We are loved and protected in the arms of The Father. Let’s stay together where we are all safe.