“The FBI intelligence bulletin from the bureau’s Phoenix field office, dated May 30, 2019, describes “conspiracy theory-driven domestic extremists,” as a growing threat, and notes that it is the first such report to do so. It lists a number of arrests, including some that haven’t been publicized, related to violent incidents motivated by fringe beliefs.

“The document specifically mentions QAnon, a shadowy network that believes in a deep state conspiracy against President Trump, and Pizzagate, the theory that a pedophile ring including Clinton associates was being run out of the basement of a Washington, D.C., pizza restaurant (which didn’t actually have a basement).

“The FBI assesses these conspiracy theories very likely will emerge, spread, and evolve in the modern information marketplace, occasionally driving both groups and individual extremists to carry out criminal or violent acts,” the document states. It also goes on to say the FBI believes conspiracy theory-driven extremists are likely to increase during the 2020 presidential election cycle, according to Yahoo.”

The FBI then acknowledged that real cover-ups and conspiracies that are proven to be true also make people upset at their government, noting that the “threat” is intensified by “the uncovering of real conspiracies or cover-ups involving illegal, harmful, or unconstitutional activities by government officials or leading political figures.”

Apparently, if you find out that the government is lying, cheating, stealing, or murdering, you are a threat and should be treated as a domestic terrorist.

While QAnon and other groups have certainly put out ridiculous claims, this document subsequently ensnares millions of innocent people for doing nothing other than questioning their government. There is no doubt that crazy people — who believe in conspiracy theories — carry out crazy acts.

It is highly likely, in fact, that most domestic terrorists have acted based on some irrational conspiracy that they believed was real. But tens of millions of other people don’t act, and asking questions is the only way to figure out real conspiracies. This should never be considered “domestic terrorism.”

Because a few ignorant people make threats based off of unfounded conspiracy theories does not mean that anyone should be silenced or labeled a terrorist.

However, this has already begun.

In 2017, on Reddit, r/Pizzagate was unceremoniously banned by the social media company — with a disclaimer stating that the subreddit was banned specifically for “the proliferation of personal and confidential information,” noting that,”We don’t want witch hunts on our site.”

Then, the FBI and other groups attempted to associated the insane man who took an AR-15 into the Comet pizzeria with those who question government.

While pizzagate turned out to be false, asking questions about these things is necessary as pedophilia is most certainly a real problem among many of the heavy movers and shakers in the establishment.

There is certainly no shortage of ignorant and belligerent people in this world who would make threats against innocent people. But this does not mean that the dissemination of information should be silenced — regardless of whether or not it is factual.

If the state begins a campaign of censorship, regardless of its intentions of ‘preventing threats,’ it will be used to silence everyone who the establishment disagrees with — history proves this to be the case, every single time. 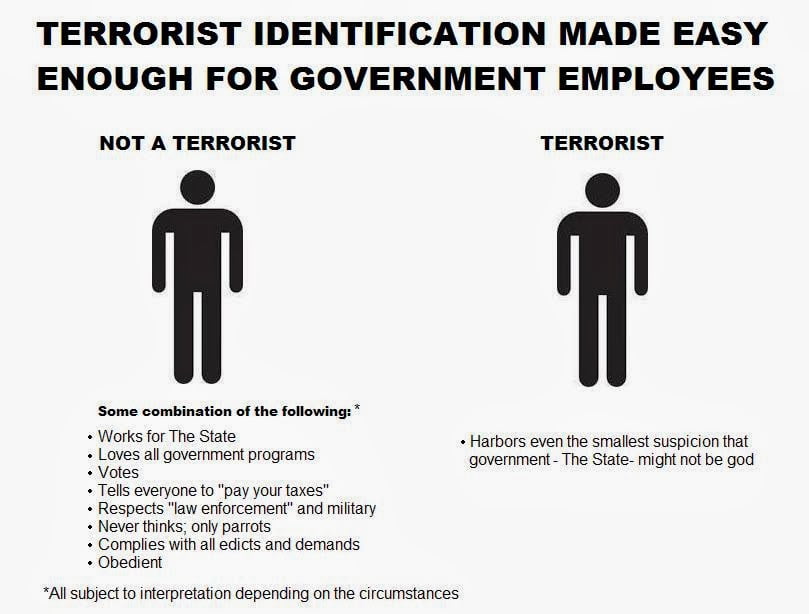 Where they have burned books, they will end in burning human beings.

Because a few easily swayed individuals take tidbits of information and make brash decisions does not mean that this information should be stopped.

Sadly, however, the new FBI memo is nothing new.

In fact, in spite of having no real reason to go after ‘conspiracy theorists’ and ‘patriot groups’, the government has a long history of infiltrating groups and labeling those who question the status quo as a threat. It even has a name: PATCON, short for “Patriot Conspiracy.”

Indeed, much of the police state which has risen up around the country is in response to the essentially non-existent threat from those who want to expose the crimes of the state who are labeled as extremist groups. YouTube and Google have even gotten in on the action and have moved to censor evidence of US war crimes and historical footage of war.

A police sergeant in Morgan County, Indiana admitted in May of 2014 that his department had obtained an armored vehicle in part because of returning military veterans were deemed domestic terror threats by Homeland Security in 2009.

The MIAC Report, a federal training document famously presented to Missouri police in 2009, went as far as falsely tying supporters of former Presidential Candidate Ron Paul and the Constitution to “extremist groups” as well.

In 2014, a sheriff’s deputy admitted on video that these weapons of war were needed to fend off “constitutionalists” with firearms.

All this memo does is further these previous attacks against those who want peace and freedom and it does so by blurring the lines between real extremists and freedom loving activists.

After all, if tyrants can associate hate and extremism with the ideas of peace and liberty — the herd will be far easier to keep under control and will have no problem voting away their rights to fight this non-existent threat.