Prepare For Change
Home ARCONTES Criminal Embargoes: Venezuela and Iran in the Crosshairs of Murderers Inc –... 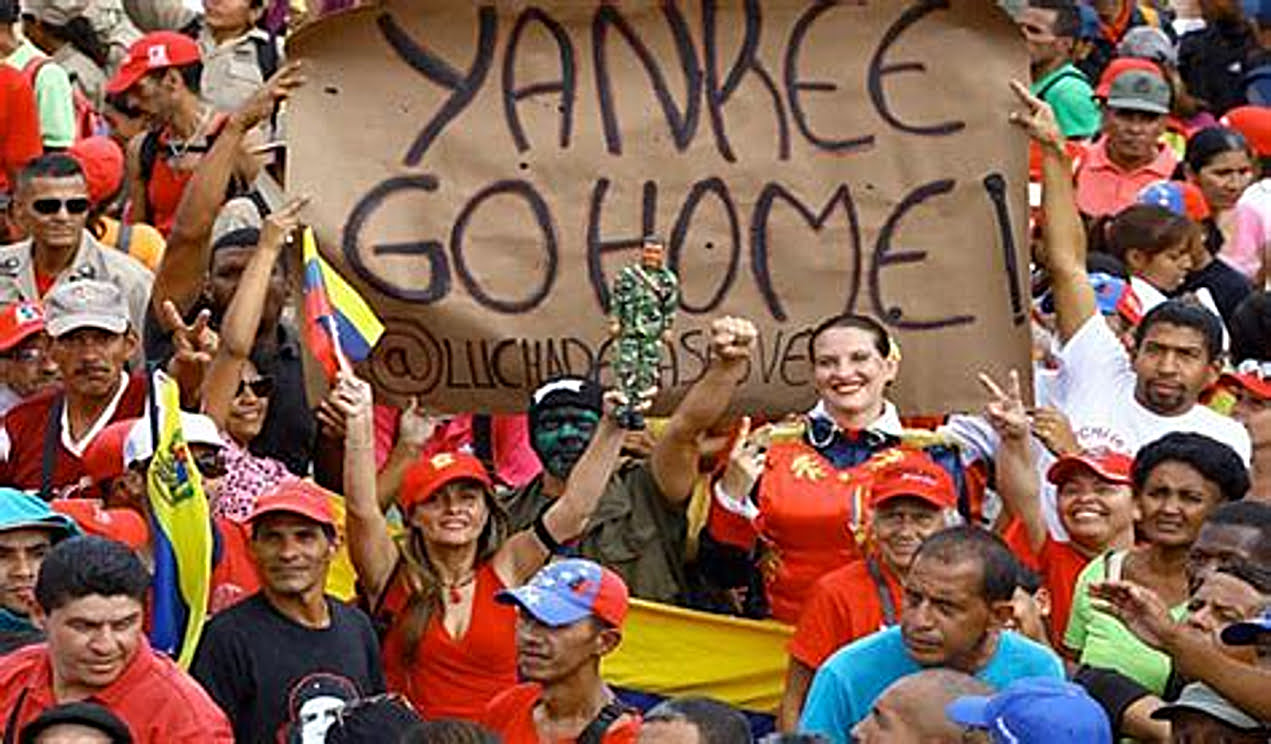 Imagine just for a moment, the World would stand up in unison, sick and tired of the aggressive killer arrogance of the United States and her vassals – and their joint war-force called NATO – and this World, our World, what’s left of it when you deduct Washington and its Brussels allies, would at once block every shipment of everything destined for the ports of the United States of America; every sea port, airport and road port. Hermetically. Nothing would enter. Nothing, no food, no medicine, no electronics, no cars – no nothing. And nothing could leave. No exports, no petrol, no grains, no meat, no pharmaceuticals and foremost, no weapons. Nothing.

And now, take your mind a step further – and imagine the same – exactly the same, a total and full blockage of Israel – nothing would enter, no food, no fuel, no medication, no machinery and especially no weapons – and nothing would leave; a full and total blockage.

This would of course be totally illegal; illegal and unacceptable, by any international law, by the standards of the UN Charter, by the Human Rights Laws and Directives – by any ethical values of human morals. Wouldn’t it? – Yet, this is exactly what these countries are doing, have been doing for decades, sanctioning to strangle and murder entire populations into death or submission. The US with Cuba; Israel with Palestine. And the coercion and strangulation go on, unabated.

The longest embargo – illegal, inhuman and outright criminal – Washington imposed on Cuba – 60 years. Because Cuba has chosen socialism as her form of state and government. Cuba survived and will never give in to the tyrant of the north.

Now the US is expanding her palette of killing by impunity to dominate and subjugate nation after nation which they do not consider bending sufficiently to the dictate of their masters. Venezuela has been targeted for two decades, ever since former President Hugo Chavez was democratically elected in 1998; and Iran, ever since the US-imposed Shah was deposed in 1979 – exactly 40 years ago – by Iran’s Islamic Revolution. Both Venezuela and Iran are rich in natural resources, especially hydrocarbons but also in gold, rare earths and other precious metals and stones.

Contrary to what one would like to imagine, international world bodies, like the United Nations and her sister and associated organizations remain just about silent. When a high-level official utters some benign criticism of the US or Israel – it flairs up for a moment in the ‘news’, then it disappears again, as if it never happened. And indeed, nothing happens. They – the US and Israel – go on with their crimes in impunity.

The latest is an open declaration of economic warfare by Washington, a total embargo on Venezuela; the embargo is now being turned into a naval blockade. Similar steps are to be taken for Iran. That literally means that no merchandise – no matter how vital for survival, like food and medication, is allowed into Venezuela. Three days ago, the US seized, totally illegally, a cargo ship attempting to deliver food and medication to Venezuela – in the Panama Canal, territory which the US does not own or control anymore.

The ship was carrying soy cakes, from which Venezuela was to produce food. Never mind, that the cargoes are fully paid for by Venezuela. And this seems to be just the beginning. Vessels leaving Venezuela with petrol deliveries to client countries are also targeted for blockage, thus confiscating, or rather stealing, Venezuela’s main source of income on which she intends to survive and feed and provide health care for her people. This, in addition to the more than 130 billion dollars total Venezuelan assets confiscated – stolen – by the US worldwide.

And nobody says beep. Almost. Yes, there are some collective protests by countries in solidarity – like key members of the Sao Paulo Forum, as well as more than 60 members of the Non-Aligned Movement (NAM – total 120 members) that have become especially active in recent years in defense of Venezuela within the United Nations. Protests and protest declarations also take place by ALBA members, a Latin American trade alliance (ALBA – Bolivarian Alliance for the Peoples of Our America, 11 members [Venezuela, Cuba, Bolivia, Nicaragua, Dominica, Ecuador, Antigua and Barbuda, Saint Vincent and the Grenadines, Saint Lucia, Grenada and the Federation of Saint Kitts and Nevis]).

>But most interesting are the hypocrites, those who write and scream that Venezuelans are starving to death, that the Maduro government neglects its people – yet these accusers-in-falsehood – let the US and her vassals strangle Venezuela and steal her foreign assets, including foreign reserves and gold, food and medical imports – they are saying zilch, nada, nothing. Just watching.

To top it all off, the Human Rights Commissioner, Madame Michelle Bachelet, Hypocrite-in-chief, who recently visited Venezuela, at the invitation of President Nicolas Maduro, on a Human Rights mission, and who delivered a devastating report about Venezuela’s HR, full of lies, half-truths and outright omissions, not mentioning with one word the US inspired coup attempts, the US-funded opposition and its bloody atrocities perpetrated on the Chavista population, and the strangulating and starving by the US and US-dictated European sanctions – Madame Bachelet now came forward condemning the naval blockade. Great. But she did not stand up against the deadly embargo by the US and the European Union. – What credibility remains for the Human Rights Commission? – The world can see it – it’s all bought, coerced into submission, like so many other UN agencies by the Murderers Inc.

If we are not careful, they are soon going to rule the globe. Thanks god, for Russia and China – which are also subjects of US-EU sanctioning and targeted for take-over. But they are a tiny little bit too big and too strong for this sort of games by the decaying US empire and her obedient rats on the sinking ship.

Similarly, the European Union – despots as they have been for hundreds of years as colonialists in Africa, Asia and Latin America – and continue in a modern colonial role through economic control of much of Africa – this very EU, has been sanctioning Venezuela for years on the orders of Washington, naturally, who else? – Now they condemn the naval blockade, but continue their routine sanctions regime.

According to a study carried out by the Washington DC based Center for Economic and Policy Research (CEPR), under guidance of Mark Weisbrot, CEPR co-director and Jeffrey Sachs, economics professor, Director, Center for Sustainable Development, Columbia University, New York, US and EU sanctions have cost some 40,000 Venezuelan lives. This mainly since August 2017, when Washington escalated its unilateral coercive measures against Venezuela and her state oil company, PDVSA, cutting them off international financial markets.

Yes, the world would have plenty of reasons to stand up and dish out similar naval and air blockades against the US and Israel. Just as a teaser to begin with, and if that doesn’t send a strong enough wake-up message, perhaps such embargoes should be considered on a longer-term indefinite scale. It’s illegal. But we are living in a world where international laws don’t count – where laws are made, as we go, by the self-declared hegemon, the US of A, and her symbiotic Middle East ally, Israel. – So, why not nudging the legal, moral and ethical order back into balance?

Peter Koenig is an economist and geopolitical analyst. He is also a water resources and environmental specialist. He worked for over 30 years with the World Bank and the World Health Organization around the world in the fields of environment and water. He lectures at universities in the US, Europe and South America. He writes regularly for Global Research; ICH; RT; Sputnik; PressTV; The 21st Century; TeleSUR; The Saker Blog, the New Eastern Outlook (NEO); and other internet sites. He is the author of Implosion – An Economic Thriller about War, Environmental Destruction and Corporate Greed – fiction based on facts and on 30 years of World Bank experience around the globe. He is also a co-author of The World Order and Revolution! – Essays from the Resistance. He is a Research Associate of the Centre for Research on Globalization.