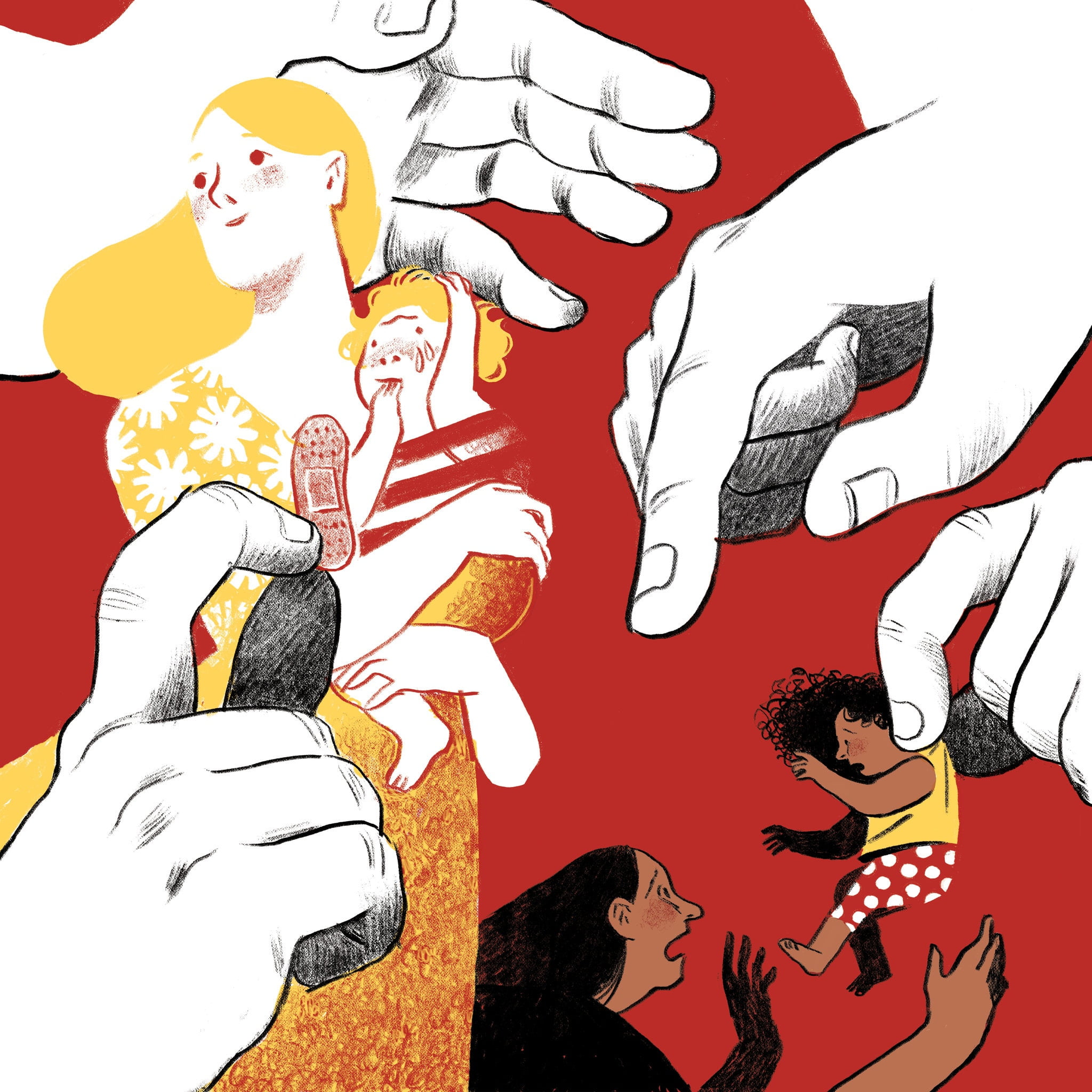 My black and Latino clients are accused of abuse when their kids have accidents.

(Ms. Horan-Block is a lawyer.)

When a child experiences a mild head injury and a parent seeks medical attention, what happens next in New York City seems to depend on the ZIP code and the color of the parent’s skin.

In April, the actress Jenny Mollen, wife of the actor Jason Biggs and resident of Manhattan’s affluent West Village, announced on social media that she had accidentally dropped her 5-year-old son, causing a skull fracture and requiring treatment in the intensive care unit of a private Manhattan hospital’s I.C.U.

Three months earlier and several miles north in the Bronx, my client, a Latina mom, was folding laundry in her apartment when she saw her 9-month-old daughter and 7-year-old son bump heads while playing on the bed. The following day she noticed that her daughter had a bump on her head. She took the baby to her pediatrician, and a follow-up at the hospital showed two minor skull fractures with a small underlying bleed.

This is where Ms. Mollen’s and my client’s stories diverge. According to Ms. Mollen’s social media account of the incident, she and Mr. Biggs were met with compassion and sympathy by the hospital. Ms. Mollen publicly thanked the staff, saying she was “forever grateful.”

At the Bronx hospital, though, my client was met with suspicion, interrogation and accusations of child abuse, even after explaining her daughter’s accidental head bump with her brother to the hospital staff. Emergency room staff members called the New York City Administration for Children’s Services to report possible child abuse. A.C.S. workers and the New York City police interrogated her, as well as her husband and their 14-year-old daughter. At no time was this distraught mother told she could or should contact a lawyer. Nonetheless, when the baby was ready for discharge without requiring any medical treatment, A.C.S. told her parents that they could not take her home and that they must identify family members to care for her and her siblings. Otherwise, the children would be placed in the foster system with strangers. Though she was still regularly nursing the baby and no judge had reviewed this decision, my client had no choice but to comply. She left the hospital without her daughter.

Two days later, as a family defense lawyer who represents parents against abuse charges in family court, I met her. She was terrified and shaking during our first conversation, and told me she had not seen her children in two days. The first thing she wanted to know was when they could come home. That day, without any evidence of wrongdoing, A.C.S. filed a petition in Bronx Family Court accusing her and her husband of child abuse by intentionally causing their daughter’s skull fractures. A.C.S. asked the judge to issue an order to keep the children out of their parents’ home and asked that they remain with a relative.

To be clear, there’s nothing to suggest that Ms. Mollen and Mr. Biggs abused their child or that they should have been investigated or charged with abuse. The outrage is not that they were treated with compassion and understanding — it’s that low-income black and Latino parents in the Bronx are not.

Though the words “skull fracture” are enough to bring chills to any parent of a young child, in reality mild skull fractures in young, mobile children commonly result from accidents and generally do not require treatment other than observation. And though parents can usually describe the event or provide information about how they believe a skull fracture was caused, it is not uncommon for a parent to notice increasing head swelling or a bump hours or days after something happened, when the child’s activities and movements are long forgotten.

In my experience representing parents against abuse charges in the Bronx, I have repeatedly seen the mere existence of a skull fracture in a young black or Latino child brought to the hospital trigger a call to a state child abuse hotline, an investigation, a child abuse accusation in family court and the removal of children from parents. This is especially the case when a parent cannot tell the hospital exactly how the injury was caused because it may have occurred days before the symptoms arose or were noticed.

In the past 18 months alone, we at Bronx Defenders have represented at least six parents charged with abuse based on a child’s minor head injury.

Research shows that black and Hispanic pediatric emergency room patients with minor head trauma are two to four times more likely to be evaluated and then reported (as suspected abusive head trauma) when compared with white, non-Hispanic patients. Once there are suspicions of abuse, black children are more likely to receive invasive testing like full body X-rays.

We have challenged child abuse allegations in the courtroom on several occasions, and it almost always turned out that A.C.S. had little medical evidence to support its contention that an isolated and mild skull fracture was from abuse rather than an unfortunate accident — even when the parent could not say how the fracture occurred. For family defense attorneys, the process of litigating hearings to exculpate parents and reunite families can last weeks or months, during which time the family is traumatically separated. Even short stays in foster care have proven harmful to children, who can be placed with strangers and separated from siblings, family and other support systems. To address this harm, which is experienced disparately by low-income parents of color, A.C.S. needs to change its practice of presumptively separating children from their parents without adequate evidence that the child was harmed by a parent.

In the case of my client, for example, I immediately consulted a New York City-based pediatric neurosurgeon to confirm that the baby’s skull fracture was minor, plausibly accidental, and that her mom’s story was consistent with the injury. It was then quickly exposed during my client’s arraignment that A.C.S. had no firm medical evidence to support its charge of child abuse. In fact, A.C.S. admitted that though it had separated her from her children and filed abuse charges, it had not spoken to a neurologist, neurosurgeon or child abuse specialist, nor had it spoken to any doctor who provided conclusive evidence that the baby’s skull fracture was anything other than an unfortunate accident. That day, over A.C.S.’s objections, the judge ordered that the children be returned home, and three months later, A.C.S. withdrew its charges and the case was dismissed.

But none of this should have happened. All families deserve the sort of support and compassion that the Biggs/Mollen family received in a time of need.

While a better-safe-than-sorry approach that accelerates child removals may sound like a responsible way to protect children, it ignores the harm and trauma children can experience when they are separated from their families and placed into foster care.

New York City must grapple with how and why it has permitted a system to hurt children by believing some parents but not others.

Jessica Horan-Block is a supervising attorney at the Bronx Defenders.

The Times is committed to publishing a diversity of letters to the editor. We’d like to hear what you think about this or any of our articles. Here are some tips. And here’s our email:[email protected].