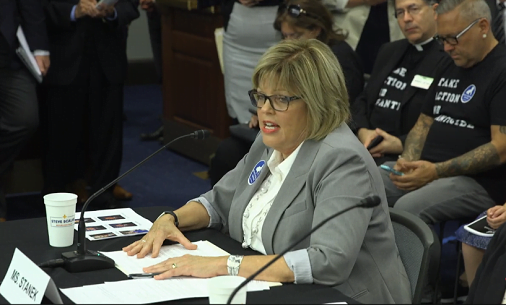 Republican members of Congress held a hearing today on the Born Alive bill that would provide medical care and treatment for babies who survive abortions. During the hearing, nurse Jill Stanek talked about her experience discovering a baby who had survived an abortion procedure.

Stanek was working in a hospital in Chicago at the time when she discovered the newborn infant left to die in a soiled utility room. She conveyed her experience during the testimony portion of the hearing today:

When I heard Virginia Governor Ralph Northam, a pediatric neurologist, describe during an interview the process by which doctors determine to shelve unwanted newborns to die, it hit painfully home to me.

Governor Northam was right. That is exactly what happens.

I know because I cared for a dying baby who was on the other side of that decision. My experience was 20 years ago, but as Governor Northam made clear, it could have happened yesterday.

I was a Registered Nurse at Christ Hospital in Illinois, when I learned it committed abortions into the second and third trimesters. The procedure, called induced labor abortion,sometimes resulted in babies being aborted alive.In the event a baby was aborted alive, he or she received no medical assessments or care but was only given what my hospital called“comfort care”-made comfortable, as Governor Northam indicated.

One night, a nursing co-worker was transporting a baby who had been aborted because he had Down syndrome to our Soiled Utility Room to die –because that’s where survivors were taken. I could not bear the thought of this suffering child dying alone, so I rocked him for the 45 minutes that he lived.

He was 21 to 22 weeks old, weighed about 1/2 pound, and was about the size of my hand. He was too weak to move very much, expending all his energy attempting to breathe. Toward the end he was so quiet I couldn’t tell if he was still alive unless I held him up to the light to see if his heart was still beating through his chest wall.

After he was pronounced dead, I folded his little arms across his chest, wrapped him in a tiny shroud, and carried him to the hospital morgue where we took all our dead patients.

From what I observed, it was not uncommon for a live aborted baby to linger for an hour or two or even longer. One abortion survivor I was aware of lived for almost eight hours.

Of 16 babies Christ Hospital aborted during the year 2000, four that I knew of were aborted alive. Each of those babies –two boys and two girls –lived between 1-1/2 and 3 hours.One baby was 28 weeks’ gestation –7 months old–and weighed two pounds, seven ounces.