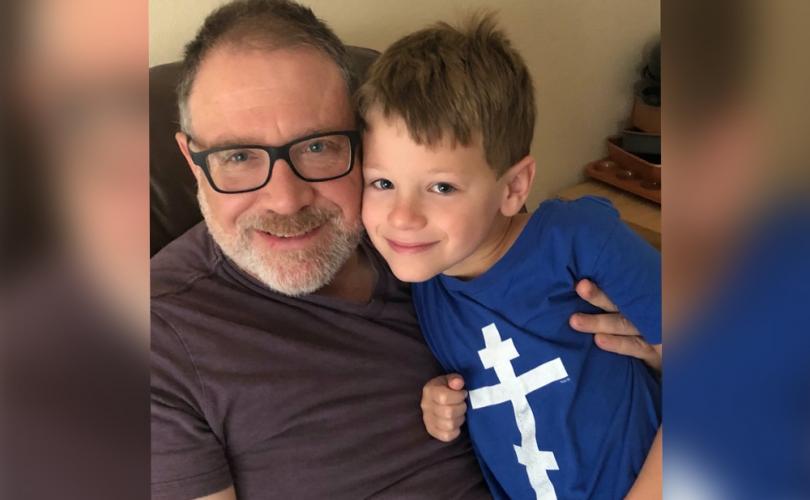 Jeffrey Younger and his son James

DALLAS, Texas, October 21, 2019 – A jury in Dallas, Texas has ruled against Jeffrey Younger, the father who is trying to protect his seven-year-old son, James, from chemical castration via a gender “transition.” This means James’ mother, Dr. Anne Georgulas, will be able to continue “transitioning” him into “Luna,” and now has full authority to start him on puberty blockers and eventually cross-sex hormones.

The jury’s decision likely means that Mr. Younger will be required to “affirm” James as a girl, despite his religious and moral objections, and will also be forced to take a class on transgenderism.

Mr. Younger and Dr. Georgulas were in court last week fighting over custody and decision-making abilities for James and his twin, Jude. Mr. Younger argues his ex-wife is “transitioning” James against the boy’s will.

Dr. Georgulas, who brought the lawsuit, was asking Mr. Younger’s possession schedule be altered to decrease overnight stays and to force his visits with the boys to be supervised. Dr. Georgulas brought the original modification suit to the court and did not request a jury trial. Mr. Younger, in his counter-petition, asked for a jury trial. Since Mr. Younger requested the jury trial, the jury ruled on his specific request for Sole Managing Conservatorship and the judge ruled on all other aspects of the petition as brought by Dr. Georgulas.

She was also asking that Jeff be forbidden from calling his son James – his given and legal name – and that he be prohibited from bringing James around people who do not “affirm” James as a “girl.”

Mr. Younger was asking to be granted Sole Managing Conservatorship of the boys, meaning he would have had complete authority over medical, psychological, and other decision-making for the boys.

The jury did rule that one of the parents should be Sole Managing Conservator – but that it shouldn’t be Mr. Younger.

Before this case, Dr. Georgulas had complete authority over psychological care decisions for the boys. She was required to inform Mr. Younger of her decisions, but he did not have any say in her choice of care.

Last week, the arguments revolved around James’ diagnosis of gender “dysphoria,” medical records recommending he begin the process of preparing for puberty blockers, and expert testimony about the risks and alleged benefits of puberty blockers and cross-sex hormones.

Mr. Younger is worried about Dr. Georgulas forcing a lifetime of misery on their son. Transgender-identifying individuals, even when encouraged in their confusion, suffer from more psychological issues than the general population, have shorter lifespans, and are more likely to commit suicide.

According to the Mayo Clinic, possible side effects of feminizing cross-sex hormone therapy are:

Expert witnesses testified to a child’s inability to fully comprehend the potential side effects of such therapy, such as permanent infertility, inability to ever naturally engage in sexual relations, and a decreased lifespan.

On Friday, protesters called on Texas lawmakers to pass legislation making it illegal for anyone under 18 years of age to begin a medical transition. They argued that children cannot fully understand the lifelong consequences of their decisions and parents should not be allowed to make this decision for their children.

Currently, there aren’t any U.S. laws that restrict the use of puberty blockers or cross-sex hormones or outline a minimum age of administration.

Dr. Georgulas testified today James and Jude are not actually biologically related to her. They were created through in-vitro fertilization and the couple used an egg donor.