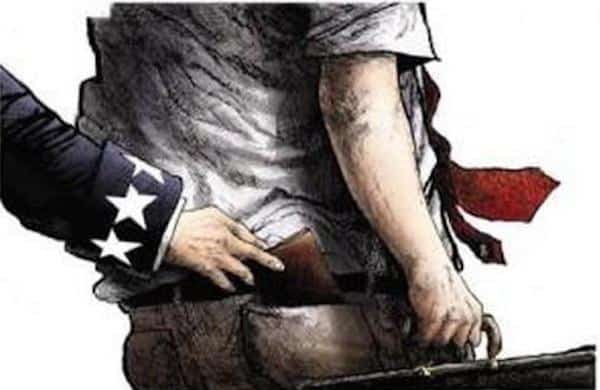 International Man: Before 1913 there was no income tax, and the United States was a much freer country. Initially, the government sold the federal income tax to the American people as something only the rich would have to pay.

Jeff Thomas: Yes, exactly. It always begins this way. The average person is always happy to see the rich taken down a peg, so this makes the introduction of the concept of theft by the government more palatable. Once people have gotten used to the concept and accept it as being perfectly reasonable, then it’s time to begin to drop the bar as to who “the rich” are. Ultimately, the middle class are always the real target.

Jeff Thomas: Any good politician understands that you begin with the thin end of the wedge, then expand upon that as soon as you feel you can get away with it. The speed at which the tax rises is commensurate with the level of tolerance of the people. And in different eras, the same nation may have a different mindset. The more domination a people have come to accept from their government, the faster the pillaging can be expanded.

As an example, the Stamp Tax that King George III placed upon the American colonies in the eighteenth century was very small indeed – less than two percent – but the colonists were very independent people, asking little from the king in the way of assistance, and instead, relying upon themselves for their well-being. Such self-reliant people tend to be very touchy as regards confiscations by governments, and even two percent was more than they would tolerate.

By comparison, if today, say, Texas were to eliminate all state taxation and allow only two percent in federal taxation, Washington would come down on them like a ton of bricks, saying they were attempting to become a “tax haven.” They’d be accused of money laundering and aiding terrorism and might well be cut out of the SWIFT system. The federal government would shut down the state government if necessary, but diminished tax would not be tolerated.

International Man: Of course, once the American people conceded the principle of an income tax in 1913, the politicians naturally couldn’t resist ramping it up. Just look at the monstrosity that exists today in the US tax code, which most Americans passively accept as “normal.” It’s a typical example of giving an inch and taking a mile.

Jeff Thomas: Yes – the key to it is twofold: First, you have to be sensitive as to how quickly you can ramp up taxation, and second, that rate is directly proportional to the level that the public receive largesse from the government. They have to have become highly dependent upon a nanny state and thereby willing to take their whipping from nanny. The greater the dependency, the greater the whipping.

International Man: Homeowners in the US – and most countries – must regularly pay property taxes, which are taxes on property that you supposedly own. Depending on where you live, they can be quite high and never seem to go down. What are your thoughts on the concept of property taxes?

Jeff Thomas: Well, my view would be biased, as my country of citizenship has never, in its 500-year history, had any direct taxation of any kind. The entire concept of direct taxation is therefore anathema to me. It’s easy for me to see, simply by looking around me, that a society operates best when it’s free of taxation and regulation and people have the opportunity to thrive within a free market.

Years ago, I built my first home from my savings alone, which had been sufficient, because my earnings were not purloined by my government. I never paid a penny on a mortgage and I never paid a penny on property tax. So, following the construction of my home, I was able to advance economically very quickly. And of course, I additionally had the knowledge that, unlike most people in the world, I actually owned my own home – I wasn’t in the process of buying it from my bank and/or government.

So, not surprisingly, I regard property tax as being as immoral and as insidious as any other form of direct taxation.

International Man: Not all countries have a property tax. How do they manage?

Jeff Thomas: I think it’s safe to say that political leaders don’t really have any particular concern over whether a tax is applied to income, property, capital gains, inheritance, or any other trumped-up excuse. Their sole concern is to tax.

Taxation is the lifeblood of any government. Once that’s understood, it becomes easier to understand that government is merely a parasite. It takes from the population but doesn’t give back anything that the population couldn’t have provided for itself, generally more efficiently and cheaply.

So, as to how a government can manage without a property tax, we can go back to your comment that the US actually had no permanent income tax until 1913. That means that they accomplished the entire western expansion and the creation of the industrial revolution without such taxation.

Smaller government is inherently better for any nation. Governments must be kept anemic.

International Man: The Cayman Islands doesn’t have any form of direct taxation. What does that mean exactly?

Jeff Thomas: It means that the driving force behind the country is the private sector. We tend to be very involved in government decisions and, in fact, generate many of the decisions. Laws that I’ve written privately for the Cayman Islands have been adopted by the legislature with no change whatsoever to benefit government. As regards property tax, there are only three countries in the western hemisphere that have no property tax, and not surprisingly, all of them are island nations: The Turks and Caicos Islands, Dominica and the Cayman Islands.

I should mention that the very concept of property ownership without taxation goes beyond the concern for paying an annual fee to a government. Additionally, in times of economic crisis, governments have been known to dramatically increase property taxes. Further, they sometimes announce that your tax was not paid for the year (even if it was) and they confiscate your property as a penalty. This has been done in several countries.

What’s important here is that, with no tax obligation, the government in question is unable to simply raise an existing tax. If you have no reporting obligation, you truly own your property. And you can’t be the victim of a “legal” land-grab.

Instituting a new tax is more difficult than raising an existing one, and instituting any tax in a country where direct taxation has never existed is next to impossible.

International Man: How do Cayman’s tax policies relate to its position as a business-friendly jurisdiction?

Jeff Thomas: Well there are two answers to that. The first is that the Cayman Islands operates under English Common Law, as opposed to Civil Law. That means that as a non-Caymanian, you’re virtually my equal under the law. Your rights of property ownership are equal to mine. Therefore, an overseas investor, even if he never sets foot on Cayman, cannot have his property there taken from him by government, squatters, or any other entity such as can legally do so in many other countries.

The second answer is that, since we’re a small island group, the great majority of business revenue comes from overseas investors. Therefore, our politicians, even if they’re of no better character than politicians in other countries, understand that, if they change a law or create a tax that’s detrimental to foreign investors and depositors, wealth can be removed from Cayman in a keystroke of the computer. Before the ink is dried on the new legislation, billions of dollars can exit, on the knowledge that the legislation is taking place.

Now, our political leaders may not be any more compassionate than those of any other country. Their one concern is that their own bread gets buttered. But should they pass any legislation that’s significantly detrimental to overseas investors, their careers are over. They understand that and recognise that their future depends upon making sure that they understand and cater to investors’ needs.

International Man: Governments everywhere are squeezing their citizens through higher taxes and new taxes. And don’t forget that printing money, which debases the currency, is also a real, but somewhat hidden, tax too.

What do you suggest people do to protect themselves?

Jeff Thomas: Well, the first thing to understand is that many nations of the world grabbed onto the post-war coattails of the United States. The US was going to lead the world, and Europe, the UK, Canada, Australia, Japan, etc., all got on board for the big ride to prosperity. They followed all the moves the US made over the decades.

Unfortunately, once they were on board the train, they couldn’t get off. When the US went from being the largest creditor nation to the largest debtor nation, those same countries also got onto the debt heroin.

That big party is coming to an end, and when it does, all countries that are on the train will go over the cliff. So, what that means is that you, as an individual, do not want to be on that train. If you’re a resident of an at-risk country, you want to, first and foremost, liquidate your assets in that country and get the proceeds out. You may leave behind some spending money in a bank account – so that you have the convenience of chequing, ATMs, etc. – and that money should be regarded as sacrificial.

You then would want to move the proceeds to a jurisdiction that’s likely to not only survive the train wreck but prosper as a result of it. Once it’s there, you want to keep it outside of banks and in forms that are difficult to take from you – cash, real estate and precious metals.

After that, if you’re able to do so, it would be wise to also get yourself out before a crash, as the day will come when migration controls will be imposed and it will no longer be legal to exit.

It does take some doing, but if faced with a dramatic change in life, I’d want to be proactive in selecting what was best for me and my family, before the changing socio-economic landscape made that choice for me.

Editor’s Note: Governments everywhere are squeezing their citizens through increased taxation and money printing–which is a hidden tax. This trend will only gain momentum as governments go broke and need more cash.

It’s an established trend in motion that is accelerating, and now approaching a breaking point. At the same time, the world is facing a severe crisis on multiple fronts. The good news is it will likely cause a panic into gold and gold mining stocks. Gold tends to do well during periods of turmoil.