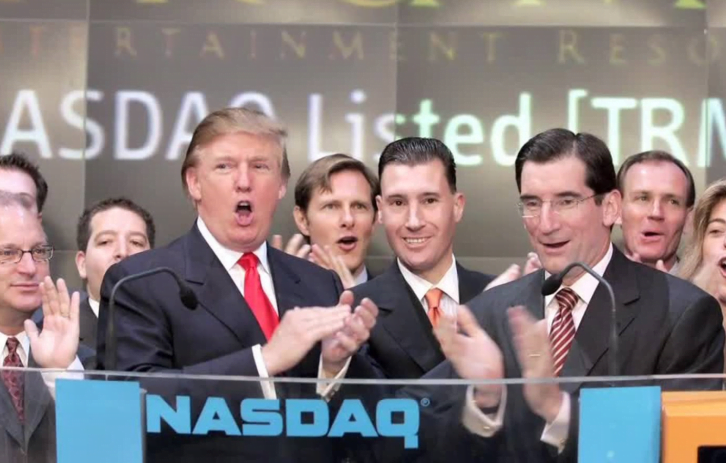 The law cut the corporate tax rate from 35% to 21%. Cohn asked how many in the audience were going to use their new savings to expand their businesses, but only a few raised their hand.

New numbers show Trump, who bashed high finance and campaigned on transforming the GOP into a worker’s party, has failed white labor and enriched America’s most despicable parasites.

The job growth Trump touts is being fueled by increases in consumer confidence and cheap credit, not investment. Low paying service and leisure jobs with no benefits and few hours remain the driving force in the labor market recovery.

Trump alone is hardly to blame for the collapse in manufacturing – the traditional pool of middle class jobs in the United States – but his tax cuts have exacerbated it. A worker shifting from manufacturing to one of the growing economic sectors can expect a pay cut of 20%.

It’s hard to think that Trump or the Jewish investment bankers formulating his economic policies (Larry Kudlow, Steve Mnuchin, previously Cohn) were unaware that their “Tax Cut and Jobs Act” would just encourage corporations and financial firms to engage in speculative practices like stock buybacks.

The Republican party has long argued that giving capital large tax cuts and free reign on price gouging spurred investment in research and jobs, but this is a lie. For example, the pharmaceutical industry always resists calls for regulation by asserting that the high prices they charge are necessary to fund internal scientific research, but a 2017 study found that they actually use most of their profits to repurchase shares on the stock market to deliver bigger profits to CEOs and shareholders.

With the Tax Cut and Jobs Act and cuts to federal reserve interest rates, speculation, not production, was massively incentivized. A year into the implementation of the Trump tax-cuts shows that real capital investment is negative, compared to previous years where it was up.

During the same period in 2018, S&P 500 companies spent $806 billion on stock buybacks, shattering all previous records. Even as economists predict a recession next year the stock market will remain stable, carried by a projected $570 billion in buybacks.

Why should companies like Apple invest in new ideas or new warehouses when they can just press a button and deliver huge profits to their shareholders by doing nothing?

This is a bad look for Trump. Today, for the first time in American history, people who work are taxed at a higher rate than idle or speculative finance capital.

The Republican party’s economic policies are an insult to the dignity of honest, productive work and a collapsing middle class.

The blood sweat and tears Trump’s rural and white working class voters expended seem to have been for nothing. The GOP’s suburban and gay, multicultural, libertarian “New Era Enterpriser” wings have used backing from plutocratic donors and think-tanks to shut out the “Country First” and “Market Skeptic” voters that once composed Trump’s base out of any prominent position in the administration.