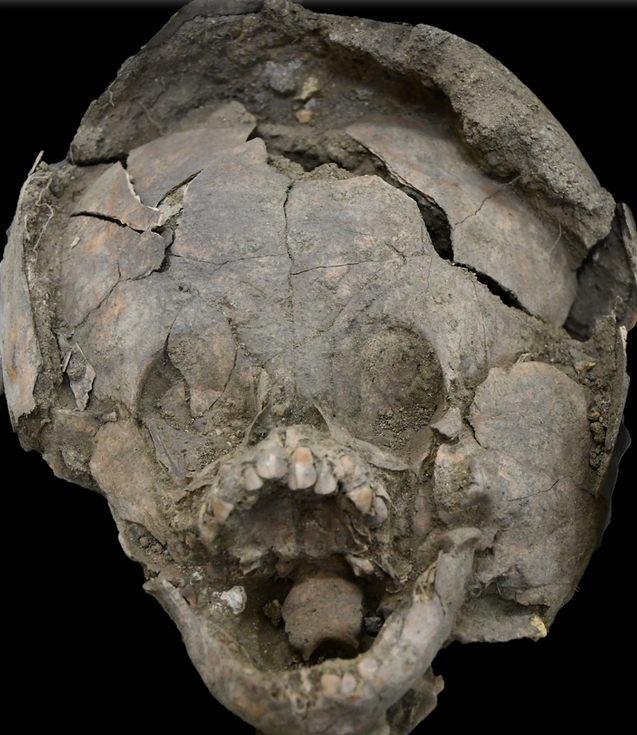 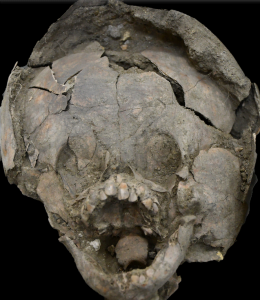 Archaeologists excavating a site in Salango, Ecuador, have discovered evidence of a burial ritual that might even make Indiana Jones shiver. As the researchers report in the journal Latin American Antiquity, excavations at a pair of 2,100-year-old funerary mounds revealed several unusual sets of remains: namely, the skeletons of two infants wearing what appear to be bone “helmets” made from the skulls of older children.

Members of the Guangala culture interred the infants at Salango, an ancient ritual complex on the country’s central coast, around 100 B.C. Archaeologists unearthed the remains — as well as those of nine other individuals, many of whom were buried with small objects including figurines and shells — while conducting excavations between 2014 and 2016.

Based on the study, the discovery represents the only known evidence of “using juvenile crania as mortuary headgear” found to date.

One of the babies was around 18 months old at time of death, while the second was between 6 and 9 months old.

As the study’s authors write, “The modified cranium of a second juvenile was placed in a helmet-like fashion around the head of the first, such that the primary individual’s face looked through and out of the cranial vault of the second.”

Perhaps most eerily, the older children’s skulls likely still had flesh when they were outfitted over the infants’ heads. Juvenile skulls “often do not hold together” if they are simply bare bone, the archaeologists note.

“We’re still pretty shocked by the find,” lead author Sara Juengst of the University of North Carolina at Charlotte tells Forbes’ Kristina Killgrove. “Not only is it unprecedented, there are still so many questions.”

Potential explanations for the unexpected burials abound: DNA and isotope analysis currently underway may clarify whether the infants and children were related, but even if these tests fail to provide a definitive answer, Juengst says the researchers “definitely have a lot of ideas to work with.”

She adds, “They are generally representative of power, ancestors, and may demonstrate dominance over other groups—such as through the creation of trophy heads from conquered enemies.”

According to the paper, the helmets could have been intended to protect the deceased’s “presocial and wild” souls as they navigated the afterlife. Other infants found in the funerary platform were buried with figurines placed near their heads, perhaps for a similar purpose. An alternative theory posits the skull helmets belonged to the infants’ ancestors and were actually worn in both life and death.

Jeungst and her colleagues also outline a “tantalizing hypothesis” centered on a volcano located near the burial site. Ash found at Salango suggests the volcano was active and likely interfering with agriculture in the area, potentially subjecting the children to malnourishment and even starvation. Sîan Halcrow, an archaeologist at New Zealand’s University of Otago whose research focuses on juvenile health and disease, tells Killgrove that all four sets of bones showed signs of anemia.

Another less likely explanation identifies the children as victims of a ritual designed to quiet the volcano. The remains show no signs of trauma, however, and as Juengst says to Newsweek’s Aristos Georgiou, the evidence suggests the four juveniles “probably were quite ill anyway.”

The most plausible explanation, according to Jeungst, is that the Guangala outfitted the infants with skulls “in reaction to some sort of natural or social disaster and [to ensure] that these infants had extra protection or extra links to ancestors through their burials.”

While the unusual burial may seem macabre to modern readers, Juengst tells Killgrove she found the helmets “strangely comforting.”

“Dealing with the death of young infants is always emotional,” she explains, “but in this case, it was strangely comforting that those who buried them took extra time and care to do it in a special place, perhaps accompanied by special people, in order to honor them.”
_________________