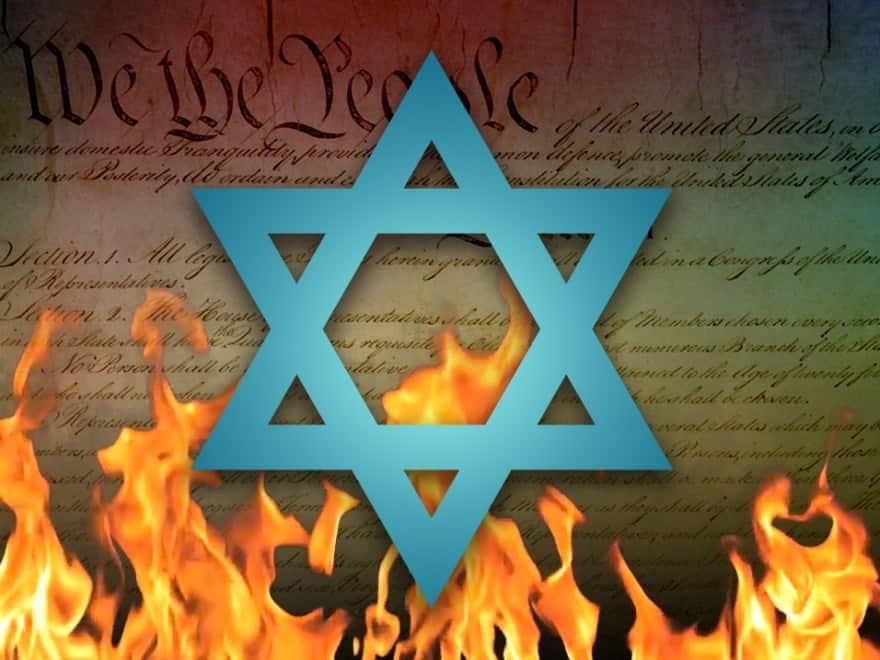 It’s official. If you find the dispossession, murder, torture, and slow-motion ethnic cleansing of Palestinians disgusting and criminal, you’re an antisemite. If you organize like-minded folks and urge others to boycott Israeli products, you may end up in prison. It’s OK to criticize official enemies—Iran, Syria, Venezuela, North Korea, Russia, China—for imaginary crimes such as chemical weapons attacks in Syria and Russia’s meddling in elections rigged and prearranged by a hidden elite, but you are flirting with serious danger when you talk truth about Israel. Trump worked around this scheme of prearranged elections and this has resulted in mass mental illness now known as the “Trump Derangement Syndrome.”

In America, the state and its media have done an effective job of disappearing wars and downplaying or straight out ignoring the Pentagon’s heavy record of lies and evasion.

“Top Defense Department officials have largely brushed aside questions surrounding reports that U.S. officials lied about progress in the 18-year Afghanistan war, with experts saying it’s unlikely the documents will change the administration’s approach to the long-running conflict,” The Hill reported earlier this week.

America’s longest war—a bonanza for death merchants—was based on a stupendous lie: Osama bin Laden was hiding out in Afghanistan and the Taliban were intransigent about turning him over, so war was the only viable option, according to the official history. It’s never mentioned that the Taliban—a creation of the CIA and Pakistani intelligence—offered to turn over the Saudi, but the Bush neocons refused the offer. The slate needed to be scrubbed clean if a gas pipeline was to traverse Afghanistan. The invasion was planned before the events of September 11, 2001.

In the lead-up to the illegal invasion of Iraq, we were sold a passel of lies. First, foremost, and most absurdly: Saddam Hussein planned to attack America with weapons of mass destruction he did not possess. Hussein had an arsenal of chemical and biological weapons, though—sold to Iraq by US corporations—but these WMDs were reserved for internal threats, for instance, the Kurds. Hussein used his formidable police state to crack down on the Shia majority and other perceived threats. He had absolutely no interest in attacking America.

Iraq was invaded for the sake of Israel. It was invaded and its civilian infrastructure destroyed and its children poisoned and murdered for a simple reason—Saddam Hussein held up Palestinian fighters as heroes. He wrote checks to the families of the dead.

In 2003, as the Iraq invasion was underway, the BBC wrote:

The [Palestinian Arab Liberation Front] estimated that Iraq had paid out $35m to Palestinian families since the current uprising began in September 2000.

Saddam’s avowed support for the Palestinians, and his missile attacks on Israel during the Gulf War, have won him wide backing in the territories.

Ever since its “war of independence” (ethnic cleansing and mass murder in Palestine that made refugees of thousands of Palestinians), Israel has gone to war with its neighbors.

During the 1950s and 60s, Israel conducted “reprisal operations” against Syria, Egypt, and Jordan (the admitted tactic was “blood cost,” killing as many people as possible, supposedly to avert future attacks), the “crisis” after Egypt nationalized the Suez Canal, the Six-Day War (a war to steal land), the “War of Attrition” (to prevent Egypt from reclaiming the Sinai captured during the previous war), the “Yom Kipper War” ( Egypt and Syria attempted to regain the Sinai and the Golan Heights), the seriously misattributed “Palestinian insurgency in South Lebanon” (the so-called Operation Litani was basically a war designed to steal and divert Lebanon’s water to Israel; this invasion is responsible for the formation of Hezbollah) and the resultant 1982 Lebanon War (to steal more land and set-up a “security zone,” using feeble PLO attacks as a predicate), the first and second Intifada, yet another invasion of Lebanon in 2006 (defeated by Hezbollah), numerous attacks on the civilian population of the Gaza Strip (Operation Pillar of Defense, Operation Protective Edge), and ongoing terror attacks and assassination operations against medics, journalists, and activists. The endless terror campaigns waged by settlers against Palestinians should also be included.

Dare mention any of this and you will be designated an antisemite. It is impermissible and will soon be illegal to criticize Israel. It is hatred of Jews to oppose the billions of dollars doled out to the Israeli state year after year without the consent of the American people.

“Among the world’s nations, the United States stands out as the most devoted backer of Israel,” writes Mark Weber, a scurrilous antisemite according to the SPLC.

With very few exceptions, even those American politicians and media figures who might sometimes criticize a particular Israeli policy are, nonetheless, vigorous supporters of Israel—and not just as a country, but as an emphatically Jewish ethnic-religious state. In spite of occasional disputes over specific policies, the US continues, as it has for years, to provide Israel with crucial military, diplo­matic and financial backing, including more than $3 billion each year in aid.

Benjamin Ginsberg, a Jewish author (The Fatal Embrace: Jews and the State), describes the outsized influence of the Jewish community, observations that have undoubtedly tagged him as a “self-hating Jew” and an extremist in league with white supremacists and other haters (now that rational discussion and indisputable facts are synonymous with hate).

Since the 1960s, Jews have come to wield considerable influence in American economic, cultural, intellectual and political life. Jews played a central role in American finance during the 1980s, and they were among the chief beneficiaries of that decade’s corporate mergers and reorganizations. Today, though barely two percent of the nation’s population is Jewish, close to half its billionaires are Jews. The chief executive officers of the three major television networks and the four largest film studios are Jews, as are the owners of the nation’s larg­est newspaper chain and the most influential single newspaper, the New York Times… The role and influence of Jews in Ameri­can politics is equally marked…

It is disturbing to witness the almost complete lack of interest on the part of the American people to put an end to America’s involvement in Israel’s wars, fought and paid for by clueless US citizens.

In the past, it was primarily the Left that opposed US wars and interventions. Now many on the Left, previously opposed to Republican president Bush’s invasions, believe this psychopathic behavior is somehow wedded to “democracy” and humanitarianism, especially if the wars are waged by Democrats such as Barack Obama—that is, if the average propagandized American bothers to think about war at all.

This disappearing act is only possible because the Left, what I call the “establishment Left,” is on a short leash and knows not to bite the hand that feeds with grants and stipends.

Beyond a small number of principled leftists and libertarians, there is virtually no opposition to Americans fighting and dying in Israel’s wars.

But that silence is hardly enough. Now the state is looking to prosecute “antisemites,” aka critics of Israel and a hijacked US foreign policy.

On Wednesday, President Trump signed the executive order, which broadened the federal government’s definition of anti-Semitism to include the International Holocaust Remembrance Alliance’s definition, which can include criticism of Israel, and instructed it to be used in enforcing laws against discrimination on college campuses under Title VI.

The “Working Definition of Antisemitism” put out by the International Holocaust Remembrance Alliance states “[m]anifestations might include the targeting of the state of Israel, conceived as a Jewish collectivity.”

Moreover, discussing and criticizing the victimization of the Palestinian people by the Israeli state is antisemitism. “Denying the Jewish people their right to self-determination, e.g., by claiming that the existence of a State of Israel is a racist endeavor,” is also described as hatred.

There is no paucity of facts on this latter point. Last year Israel passed what can only be regarded as a national race law that designates all non-Jews as second class citizens.

“From now on, two types of blood exist in Israel: Jewish blood and non-Jewish blood, on the law books as well,” writes Gideon Levy for Haaretz. (Hitler’s racism was also based on blood.)

The price of these two types of blood is also different. Jewish blood is priceless, it must be protected in every possible way. Non-Jewish blood is terrifyingly cheap, it can be shed like water. A situation that existed until now only de facto, with different standards and punishments for Jews and others, is from today by court decree.

Seventy years of nationalism and racism toward the victims is now receiving its appropriate legal backing. The nation-state law, which they said was only declarative, in the correct interpretation of [Jerusalem District Court Judge Moshe Drori], has earned its true meaning: The basic law for the superiority of Jewish blood. From now on, Israel has race law.

This “race law” is apparently OK with touchy-feely establishment liberals, while at the same time they rail against imaginary racism by “toxic white males” against state-sanctioned protected groups based on skin pigmentation and sexual orientation.

As for the real lefties—most prominently Alexandria Ocasio-Cortez, Ilhan Omar, Ayanna Pressley, and Rashida Tlaib—they know Israel is a racist state. They will, of course, eventually be removed from Congress.

Although I disagree completely with their proposed solutions to political and social problems, I agree with “The Squad” on Israel and its violent ethnic cleansing, assassination of activists, murder of children, and arrogant demand an economically besieged American public not only pay for it all but keep their mouths shut if they disagree, lest they find themselves in prison, forever marked as an antisemitic, a media exaggerated version of Hitler and the Nazis.