Prepare For Change
Home ARCONTES The USA is now at war, de-facto and de-jure, with BOTH Iraq... 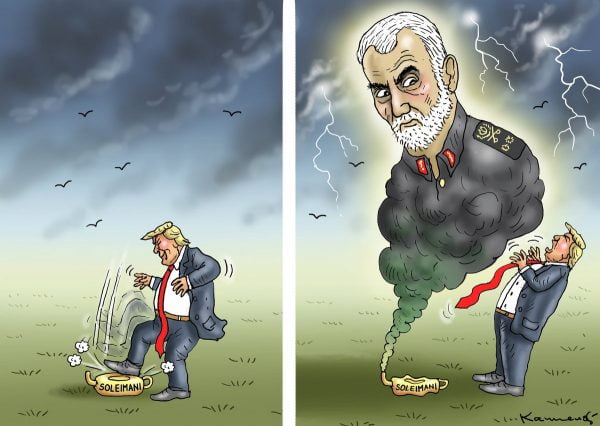 The blowback has begun

First, let’s begin by a quick summary of what has taken place (note: this info is still coming in, so there might be corrections once the official sources make their official statements).

Iraqi Prime Minister Adil Abdl Mahdi has now officially revealed that the US had asked him to mediate between the US and Iran and that General Qassem Soleimani to come and talk to him and give him the answer to his mediation efforts. Thus, Soleimani was on an OFFICIAL DIPLOMATIC MISSION as part of a diplomatic initiative INITIATED BY THE USA.

The Iraqi Parliament has now voted on a resolution requiring the government to press Washington and its allies to withdraw their troops from Iraq.

Iraq’s caretaker PM Adil Abdul Mahdi said the American side notified the Iraqi military about the planned airstrike minutes before it was carried out. He stressed that his government denied Washington permission to continue with the operation.

The Iraqi Parliament has also demanded that the Iraqi government must “work to end the presence of any foreign troops on Iraqi soil and prohibit them from using its land, airspace or water for any reason“

The Iraqi Foreign Ministry said that Baghdad had turned to the UN Security Council with complaints about US violations of its sovereignty.

Iraqi cleric Moqtada al-Sadr said the parliamentary resolution to end foreign troop presence in the country did not go far enough, calling on local and foreign militia groups to unite. I also have confirmation that the Mehdi Army is being re-mobilized.

The Pentagon brass is now laying the responsibility for this monumental disaster on Trump (see here). The are now slowly waking up to this immense clusterbleep and don’t want to be held responsible for what is coming next.

For the first time in the history of Iran, a Red Flag was hoisted over the Holy Dome Of Jamkaran Mosque, Iran. This indicates that the blood of martyrs has been spilled and that a major battle will now happen. The text in the flag says “Oh Hussein we ask for your help” (unofficial translation 1) or “Rise up and avenge al-Husayn” (unofficial translation 2)

The US has announced the deployment of 3’000 soldiers from the 82nd Airborne to Kuwait.

Finally, the Idiot-in-Chief tweeted the following message, probably to try to reassure his freaked out supporters: “The United States just spent Two Trillion Dollars on Military Equipment. We are the biggest and by far the BEST in the World! If Iran attacks an American Base, or any American, we will be sending some of that brand new beautiful equipment their way…and without hesitation!“. Apparently, he still thinks that criminally overspending for 2nd rate military hardware is going to yield victory…

Well, my first though when reading these bullet points is that General Qasem Soleimani has already struck out at Uncle Shmuel from beyond his grave. What we see here is an immense political disaster unfolding like a slow motion train wreck. Make no mistake, this is not just a tactical “oopsie”, but a major STRATEGIC disaster. Why?

For one thing, the US will now become an official and totally illegal military presence in Iraq. This means that whatever SOFA (Status Of Forces Agreement) the US and Iraq had until now is void.

Second, the US now has two options:

1) Fight and sink deep into a catastrophic quagmire or

Both of these are very bad because whatever option Uncle Shmuel chooses, he will lost whatever tiny level of credibility he has left, even amongst his putative “allies” (like the KSA which will now be left nose to nose with a much more powerful Iran than ever before).

The main problem with the current (and very provisional) outcome is that both the Israel Lobby and the Oil Lobby will now be absolutely outraged and will demand that the US try to use military power to regime change both Iraq and Iran.

Needless to say, that ain’t happening (only ignorant and incurable flag-wavers believe the silly claptrap about the US armed forces being “THE BEST”).

Furthermore, it is clear that by it’s latest terrorist action the USA has now declared war on BOTH Iraq and Iran.

This is so important that I need to repeat it again:

The USA is now at war, de-facto and de-jure, with BOTH Iraq and Iran.

I hasten to add that the US is also at war with most of the Muslim world (and most definitely all Shias, including Hezbollah and the Yemeni Houthis).

Next, I want to mention the increase in US troop numbers in the Middle-East. An additional 3’000 soldiers from the 82nd AB is what would be needed to support evacuations and to provide a reserve force for the Marines already sent in. This is NOWHERE NEAR the kind of troop numbers the US would need to fight a war with either Iraq or Iran.

Finally, there are some who think that the US will try to invade Iran. Well, with a commander in chief as narcissistically delusional as Trump, I would never say “never” but, frankly, I don’t think that anybody at the Pentagon would be willing to obey such an order. So no, a ground invasion is not in the cards and, if it ever becomes an realistic option we would first see a massive increase in the US troop levels, we are talking several tens of thousands, if not more (depending on the actual plan).

No, what the US will do if/when they attack Iran is what Israel did to Lebanon in 2006, but at a much larger scale. They will begin by a huge number of airstrikes (missiles and aircraft) to hit:

1)Iranian air defenses
2)Iranian command posts and Iranian civilian and military leaders
3)Symbolic targets (like nuclear installations and high visibility units like the IRGC)
4)Iranian navy and coastal defenses
5)Crucial civilian infrastructure (power plants, bridges, hospitals, radio/TV stations, food storage, pharmaceutical installations, schools, historical monuments and, let’s not forget that one, foreign embassies of countries who support Iran). The way this will be justified will be the same as what was done to Serbia: a “destruction of critical regime infrastructure” (what else is new?!)

Then, within about 24-48 hours the US President will go on air an announce to the world that it is “mission accomplished” and that “THE BEST” military forces in the galaxy have taught a lesson to the “Mollahs”. There will be dances in the streets of Tel Aviv and Jerusalem (right until the moment the Iranian missiles will start dropping from the sky. At which point the dances will be replaced by screams about a “2nd Hitler” and the “Holocaust”).

Then all hell will break loose (I have discussed that so often in the past that I won’t go into details here).

In conclusion, I want to mention something more personal about the people of the US.

Roughly speaking, there are two main groups which I observed during my many years of life in the USA.

Group one: is the TV-watching imbeciles who think that the talking heads on the idiot box actually share real knowledge and expertise. As a result, their thinking goes along the following lines: “yeah, yeah, say what you want, but if the mollahs make a wrong move, we will simply nuke them; a few neutron bombs will take care of these sand niggers“. And if asked about the ethics of this stance, the usual answer is a “f**k them! they messed with the wrong guys, now they will get their asses kicked“.

Group two: is a much quieter group. It includes both people who see themselves as liberals and conservatives. They are totally horrified and they feel a silent rage against the US political elites. Friends, there are A LOT of US Americans out there who are truly horrified by what is done in their name and who feel absolutely powerless to do anything about it. I don’t know about the young soldiers who are now being sent to the Middle-East, but I know a lot of former servicemen who know the truth about war and about THE BEST military in the history of the galaxy and they are also absolutely horrified.

I can’t say which group is bigger, but my gut feeling is that Group Two is much bigger than Group One. I might be wrong.

I am now signing off but I will try to update you here as soon as any important info comes in.

UPDATE1: according to the Russian website Colonel Cassad, Moqtada al-Sadr has officially made the following demands to the Iraqi government:

UPDATE2: RT is reporting that “One US service member, two contractors killed in Al-Shabaab attack in Kenya, two DoD personnel injured“.  Which just goes to prove my point that spontaneous attacks are what we will be seeing first and that the retaliation promised by Iran will only come later.

UPDATE3: al-Manar reports that two rockets have landed near the US embassy in Baghdad.

UPDATE4: Zerohedge is reporting that Iranian state TV broadcasted an appeal made during the funeral procession in which a speaker said that each Iranian ought to send one dollar per person (total 80’000’000 dollars) as a bounty for the killing of Donald Trump.  I am trying to get a confirmation from Iran about this.

UPDATE5: Russian sources claim that all Iranian rocket forces have been put on combat alert.

UPDATE6: the Russian heavy rocket cruiser “Marshal Ustinov” has cross the Bosphorus and has entered the Mediterranean.