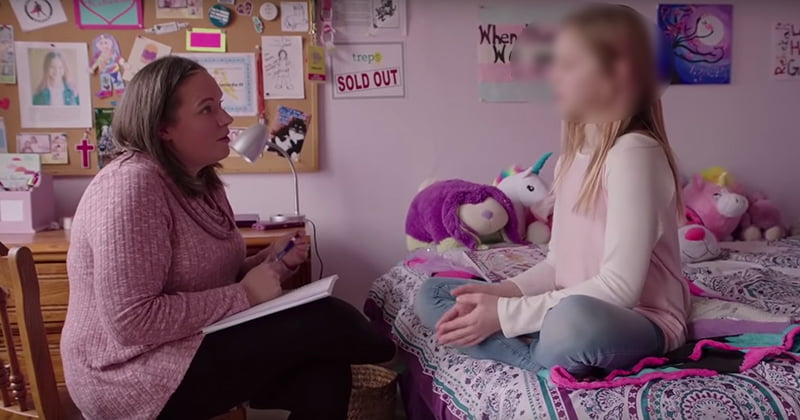 Each installment of the show focuses on the accomplishments of a young person and gifts them with a comic book illustrating their “selfless acts of bravery and kindness.”

In the Hero Project episode titled “Mighty Rebekah,” a young boy from New Jersey who started identifying as a girl at age eight explains how he got into activism.

The show focuses on Rebekah Bruesehoff and his mother Jamie who supports Rebekah’s transition and activism.

Rebekah’s father, who is a Christian pastor, also supports the child’s transition from male to female.

After the group Garden State Equality started campaigning for state guidelines regarding transgender kids in public schools, Rebekah attended and spoke at his first rally at age ten.

“It was kind of nerve-wracking because it was my first time speaking there. Speaking anywhere,” she explained.

“Holy moly. She was just a natural,” Rebekah’s mother Jamie said. “All these people were impressed by her bravery and the clarity of ‘this is who I am and I deserved a safe school.’ Suddenly people cared and wanted to hear your voice.”

“They wanted to hear what I had to say on the matter of me being me,” Rebekah added.

It’s part of a much bigger agenda: BBC’s Children Show ‘Just a Girl’ is About a Transgender Child Taking Hormone Blocking Drugs

Rebekah was shocked to be selected as a Marvel “hero,” telling The Advocate “It’s really surprising and cool. But I also think that it’s really important to have a transgender kid in one of these companies because representation is really helpful for kids who are going through their transition to know that they are not alone and that there are people fighting for them.”

Continuing, Rebekah also explained that famous transgender teen Jazz Jennings helped him transition, saying, “She inspires me by being a role model for kids like me to help them come out and transition.”

In the following video, Jamie describes how she introduced the idea of transgenderism to her then eight-year-old boy.