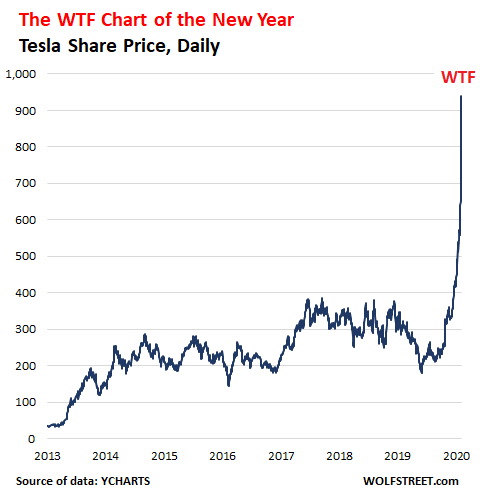 Tesla’s shares spiked another 20% this morning, or by $160, to $940 a share. Every time I write a few words, I have to go back and change the number again, because the price just keeps shooting higher. So far this year, TSLA has shot up 120%.

It could very well be that by this evening, shares are down by $300 or whatever, or that they’re at $1,100. They’re floating up high in the outer space or irrationality, and can go anywhere. So this the WTF chart of the new year with Tesla’s share price frozen at 9:51 AM Eastern Time (stock price data via YCHARTS):

A tiny automaker among giants.

The market capitalization of the company at that price was $165 billion, far ahead of the second most valued automaker in the world, Volkswagen, but still behind number one, Toyota. But in terms of the size of the company, measured by vehicles delivered, Tesla is a flyspeck.

And Tesla isn’t a high-growth miracle tech company or data company or whatever. It’s an automaker in a stagnating industry. Tesla’s total revenues inched up only 2.2% in 2019 compared to 2018, and its automotive revenues edged up only 0.7% in 2019.

To top it off, Tesla reported a net loss of $862 million for the year 2019, despite selling $594 million in “regulatory credits.” These are tax credits that Tesla obtains from the US government and governments of other countries for building EVs. Tesla loses money every year and cannot use those credits, so it sells them to other automakers that are making money.

Tesla lost money every single year ever since it started disclosing its financials, from 2008 through 2019:

But I give Tesla massive credit for having put EVs on the map.

EVs have been around since the 1800s, competing with steam-powered vehicles. GM made an EV in the 1990s, its EV1, long before Tesla even existed. But there was no demand for EVs at the time, in part because battery-cell technology wasn’t up to the job (Tesla doesn’t own the battery-cell technology either, but buys it from Panasonic and now from Chinese battery-cell makers). And GM eventually threw in the towel. Here is GM’s EV1 from 25 years ago:

Tesla accomplished a big thing – putting EVs on the map and making them cool. And it spent many billions of investor cash to do it.

But the stock price is just nuts. But wait… just because it’s nuts doesn’t mean it cannot get even nuttier. Once something is totally irrational, there is by definition no rational limit to how much more irrational it might get.

I have been on record for years cautioning people to not short Tesla, no matter how fundamentally rational that idea might seem.

Short sellers are up against huge institutional investors that are stuck in the shares and cannot sell the shares without crashing the shares, and they don’t want to see the share price decline, and every time shares drop enough, they can jump in and buy more to turn them around.

There is little public float of the shares, and given the reality of Tesla’s business and financial performance and share price, it is one of the most shorted stocks out there. And these folks panic when shares rise, and when they panic, they have to buy back the shares that they sold short, this panic buying helps fuel these spikes in share prices.

So the jury is still out on whether $940 a share this morning was the moment of peak-insanity, or if there is an even higher peak-insanity coming. Meanwhile, I’m in awe of how Tesla has turned into a Supernatural Phenomenon.