Prepare For Change
Home Awakening The China-Russia Gas Pipeline is Up and Running – Step by Step,... 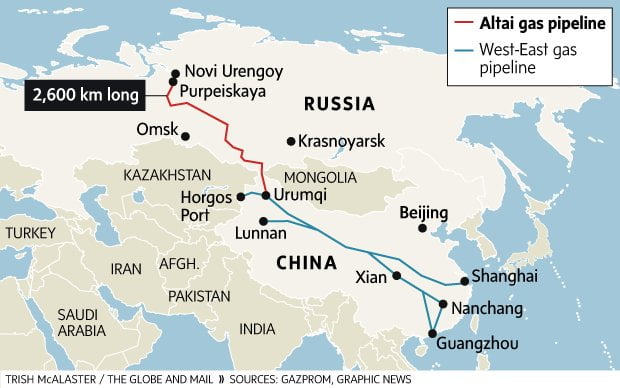 While the Western media appears fixated on the Trump impeachment spectacle, many missed the big news of the launching ceremony for the China-Russia gas pipeline, which took place on December 2nd, 2019. The pipeline is hailed as a landmark project that will transport natural gas from eastern Siberia through Northeast China to Shanghai. Given the game-changing potential of these developments, we should all pay more attention to what is happening “over there”.

Henry Kissinger once warned us: “Domination by a single power of either of Eurasia’s two principal spheres – Europe or Asia – remains a good definition of strategic danger for America. For such a grouping would have the capacity to outstrip America economically and, in the end, militarily.”

There has been much written about the shift away from US power and from the US dollar supremacy as the world’s number one reserve currency. We retain our position that the process will be a long and slow one, and it might not happen at all. In other words, we generally consider the “imminent sea change” theories somewhat premature. However, that doesn’t mean we shouldn’t pay attention to what our Russian and Chinese competitors are up to. While paradigm shifts tend to take place incrementally and over many years, key tipping points can sometimes accelerate the process and bring about drastic changes within a short period of time.

It is noteworthy that, within Eurasia, Russia and China are systematically making significant progress on various fronts. According to an article titled “How Russia and China are Building Eurasia Into a Geopolitical Powerhouse” and published by Russia Insider a few weeks ago, “Russia and China have outstripped America economically and militarily within Eurasia and are in the process of drawing the European Union into a vast, increasingly prosperous alliance as America pursues an increasingly dystopian future.”

The article outlines a few theories that sound slightly brash to our ears, which considering the source, might not be too surprising. However, similar arguments and observations seem to be increasingly prevalent in many articles and analyses outside our western media ecosystem.

A possibly more trustworthy and, at least to us, more familiar voice is that of the American Institute for Economic Research. In a well-researched article titled “U.S. Dollar Supremacy Could Quickly Fade”, they approach the topic from a different angle, but with the same noteworthy conclusions…

The author covers important developments in Eurasia that could have a profound impact on the US dollar as the single reserve currency. His analysis also explains why Goldman Sachs may have told its brokers the following: “Suggest that your clients not sell anything gold related.”

Here, we are sharing just a few excerpts from these articles, should you not have the time to read them all in their entirety:

“Russia and China offer an alternative to the imperialist model: security without coercion, aid without conditions and, instead of WTO agreements that prevent sustainable development, trade and development pacts to promote it. In addition to being permanent members of the United Nations Security Council, their executives head five of the UN’s fifteen agencies and China provides a permanent UN infantry battalion, the only country to do so.

“The blocs in play are the European Union; The Eurasian Economic Union; The Shanghai Cooperative Organization; The Association of Southeast Asian Nations; The Regional Comprehensive Economic Partnership; The Belt and Road Initiative. After the 2019 Conference on Interaction and Confidence-Building Measures in Asia (CICA) in Dushanbe, Tajikistan, President Putin, before a beaming President Xi, stressed that all of them should be integrated.

“The European Union, occupying Eurasia’s Western peninsula, is tired of the status quo. President Macron said recently, ‘We are undoubtedly experiencing the end of Western hegemony over the world…Things change, and they have been deeply shaken by the mistakes of Westerners in certain crises, by the choices that have been made by Americans for several years. And then there is the emergence of new powers whose impact we have probably underestimated for a long time’.

“Mark Carney, Governor of the Bank of England added, ‘The world’s reliance on the US dollar won’t hold and needs to be replaced by a new international monetary and financial system… It is worth considering how an SHC [synthetic hegemonic currency] in the IMF could support better global outcomes.’ Germany is completing Nord Stream II and installing Huawei systems despite US threats, and Poland, Greece, Italy, Austria, Luxembourg, Switzerland have joined the Belt and Road Initiative. One more downturn in the US economy (where manufacturing is already in recession) and the rest of the EU will follow.”

One author ends their piece by stating; “Beijing’s fully convertible digital Yuan may debut as soon as this year.”  In the last few days, there have been rumors in certain financial circles that China is going to establish a World Convertible Currency, tied to GOLD.

Similar comments were made by some other western commentators such as James Rickards, who expects the rise of a new China- and Russia-controlled financial system, with gold backing!

According to Mr. Rickards, “this new system will not involve Russian rubles, Chinese yuan or even the euro. None of those existing currencies has the liquid bond markets and rule of law needed to perform as the dominant reserve currency. Instead, this new system is based on gold.”

Mr. Rickards expects the following: “The new system will be a hybrid of the oldest form of money — gold — and the newest — digital currency. Russia and China are building encrypted-permissioned distributed ledgers. This is basically a blockchain for members only. They are creating new digital tokens. You might think of these as a Putin coins or Xi coins,” Mr. Rickards goes on to say: “The coins can be fixed at a value equal to an anchor, perhaps the IMF’s world money called SDRs. Once the coin’s value is fixed, it’s simple to convert each coin to a weight of gold at market prices.”

Well, we shall see… Stay tuned!