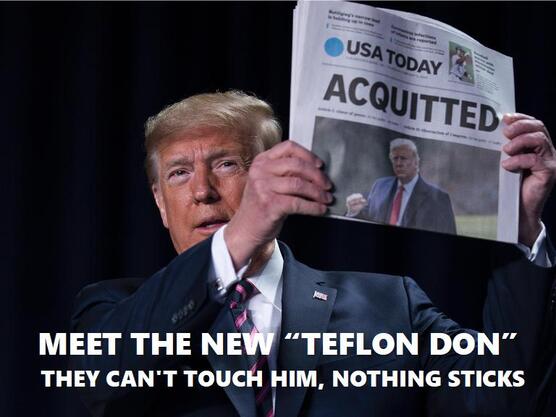 I am Ashtar and I have a message for those of the Light on Planet Eden.

It was I that joked, Sharon, calling Donald Trump the new “Teflon Don.” He was acquitted on all charges in his attempted impeachment and is free to carry on in his service to the Light.

Like him or not, he is the President of the most crime-infested country, with its otherworldly leaders, who are attempting to bring you all to your knees in servitude to them. He works with a team of on and off-world humans who implement strategies to bring your world to GESARA compliance, the White Hats or the Alliance as they are commonly referred to.

The battle is between the Light and the dark. By siding with your political party, you are empowering the two party system of the dark regime. This battle has been carried on in other parts of this galaxy for many millenia so this is not a localized war and has nothing to do with your politics. Your political systems are simply a vehicle with which to control you and this control is now being arrested.

The Light has never left your side, aiding you as you reincarnated time and time again into the depths of depravity, misery and suffering. We heard your cries and we have worked along with you to liberate your planet from the dark menace that is now losing power. The sun is on the horizon and is showing its new self to you, so that you may rejoice in the new times coming to planet Eden.

You are at the beginning. This is only the start. Please be patient. Your planet and your people are releasing the dark energies that they have held and reincarnated into time and time again and this will create some madness and chaos. We see this in the news as people riot for their freedom. We see it in the weather as your captors attempt to destroy you and what’s left of your civility in order to put their evil agenda into high gear.

The Light has won. Know that in your hearts. It is not up to one man to change your world – it is up to you all. That is why you incarnated at this time of great change – to help in Gaia’s ascension. To begin to return your planet to the Eden it once was. Know that it is not just up to the President or your other leaders – it is up to you. Focus on doing your daily work and know that every release of negativity is a contribution to the growing Light on your planet. It is a group effort, not just the task of your White Hats.

We have more in store for your world leaders. Be prepared for many shocks but some welcome changes.