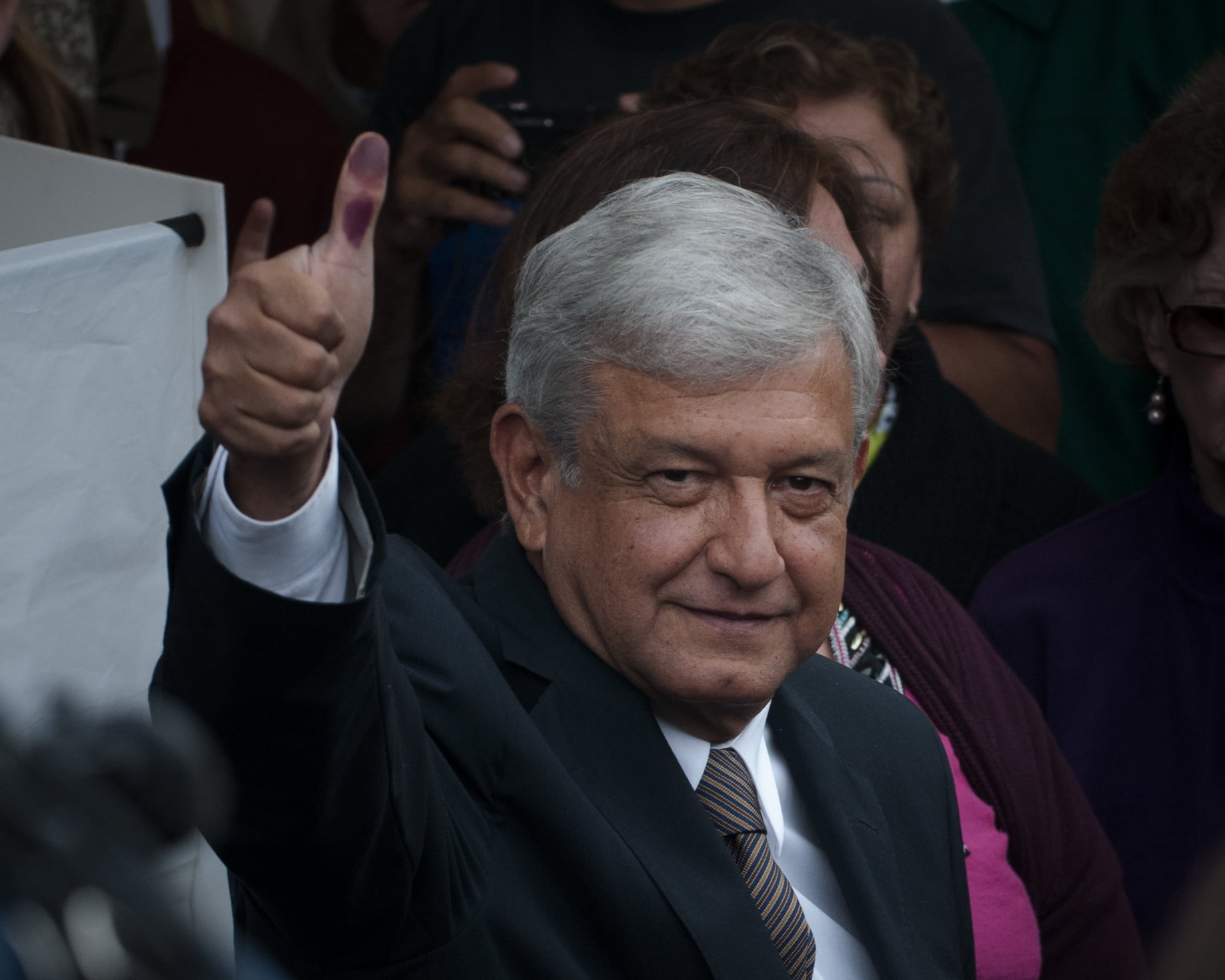 Mexico Is Showing the World How to Defeat Neoliberalism

While U.S. advocates and local politicians struggle to get their first public banks chartered, Mexico’s new president has begun construction on 2,700 branches of a government-owned bank to be completed in 2021, when it will be the largest bank in the country. At a press conference on Jan. 6, he said the neoliberal model had failed; private banks were not serving the poor and people outside the cities, so the government had to step in.

Andrés Manuel López Obrador (known as AMLO) has been compared to the United Kingdom’s left-wing opposition leader Jeremy Corbyn, with one notable difference: AMLO is now in power. He and his left-​wing coalition won by a landslide in Mexico’s 2018 general election, overturning the Institutional Revolutionary Party (PRI) that had ruled the country for much of the past century. Called Mexico’s “first full-fledged left-wing experiment,” AMLO’s election marks a dramatic change in the political direction of the country. AMLO wrote in his 2018 book “A New Hope for Mexico,” “In Mexico the governing class constitutes a gang of plunderers…. Mexico will not grow strong if our public institutions remain at the service of the wealthy elites.”

The new president has held to his campaign promises. In 2019, his first year in office, he did what Donald Trump pledged to do — “drain the swamp” — purging the government of technocrats and institutions he considered corrupt, profligate or impeding the transformation of Mexico after 36 years of failed market-focused neoliberal policies. Other accomplishments have included substantially increasing the minimum wage while cutting top government salaries and oversize pensions; making small loans and grants directly to farmers; guaranteeing crop prices for key agricultural crops; launching programs to benefit youth, the disabled and the elderly; and initiating a $44 billion infrastructure plan. López Obrador’s goal, he says, is to construct a “new paradigm” in economic policy that improves human welfare, not just increases gross domestic product.

The End of the Neoliberal Era

To deliver on that promise, in July 2019 AMLO converted the publicly owned federal savings bank Bansefi into a “Bank of the Poor” (Banco del Bienestar or “Welfare Bank”). He said on Jan. 6 that the neoliberal era had eliminated all the state-owned banks but one, which he had gotten approval to expand with 2,700 new branches. Added to the existing 538 branches of the former Bansefi, that will bring the total in two years to 3,238 branches, far outstripping any other bank in the country. (Banco Azteca, currently the largest by number of branches, has 1,860.)

Digital banking will also be developed. Speaking to a local group in December, AMLO said his goal was for the Bank of the Poor to reach 13,000 branches, more than all the private banks in the country combined.

At a news conference on Jan. 8, he explained why this new bank was needed:

There are more than 1,000 municipalities that don’t have a bank branch. We’re dispersing [welfare] resources but we don’t have a way to do it.  . . .  People have to go to branches that are two, three hours away. If we don’t bring these services close to the people, we’re not going to bring development to the people. …

They’re already building. I’ll invite you within two months, three at the most, to the inauguration of the first branches because they’re already working, they’re getting the land … because we have to do it quickly.

The president said the 10 billion pesos ($530.4 million) needed to build the new branches would come from government savings; and that 5 million had already been transferred to the Banco del Bienestar, which would pass the funds to the Secretariat of Defense, whose engineers were responsible for construction. The military will also be used to transport physical funds to the branches for welfare payments. AMLO added, “They are helping me. They are propping me up. The military has behaved very well and they don’t back down at all. They always tell me ‘yes you can, yes we do, go.’ ”

To concerns that the government-owned bank would draw deposits away from commercial banks and might compete in other ways, such as making interest-free loans to small businesses, AMLO countered:

There’s no reason to be complaining about us building these branches. … [I]f private banks want to build branches, they have every right to go to the towns and build their branches, but as they won’t because they believe that it’s not [good] business, we have to do it . . . it’s our social responsibility, the state can’t shirk its social responsibility.

Issues With the Central Bank

While the legislature has approved the new bank, Mexico’s central bank can still block it if bank regulations are breached. Ricardo Delfín, who works at the international accounting firm KPMG, told the newspaper La Razón that if the money to fund the bank comes from a loan from the federal government rather than from capital, it will adversely affect the bank’s “Capitalization Ratio.” But AMLO contends that the bank will be self-sufficient. Funding for construction will come from federal savings from other programs, and the bank’s operating expenses will be covered by small commissions paid on each transaction by customers, most of whom are welfare recipients. Branches will be built on land owned by the government or donated, and software companies have offered to advise for free.

About the central bank, he said:

We’re going to speak with those from the Bank of México respecting the autonomy of the Bank of México. We have to educate them because for them this is an anachronism, even sacrilege, because they have other ideas. But we’ve arrived here [in government] after telling the people that the neoliberal economic policy was going to change. . . .

There shouldn’t be obstacles. How is the Bank of México going to stop us from having a [bank] branch that disperses resources in favor of the people? What damage does that do? Whom does it harm?

AMLO has repeatedly promised not to interfere in the business of the central bank, which has been autonomous for the past quarter of a century. But he has also said that he would like its mandate expanded from just preserving the value of the peso by fighting inflation to include fostering growth. The concern, according to The Financial Times, is that he might use the central bank to fund government programs, following in the footsteps of Argentina’s former President Cristina Fernández de Kirchner, “whose heterodox policies led to high inflation and, many economists believe, the country’s current crisis.”

Mark Weisbrot counters in The New York Times, however, that Argentina’s problems were caused, not by printing money to fund domestic development, but by a massive foreign debt. Hyperinflation actually happened under Fernández de Kirchner’s successor, President Mauricio Macri, who replaced her in 2015. The public debt grew from 53% to more than 86% of GDP, inflation soared from 18% to 54%, short-term interest rates shot up to 75%, and poverty increased from 27% to 40%.

In an upset election in August 2019, the outraged Argentinian public re-elected Fernández de Kirchner as vice president and her former head of the cabinet of ministers as president, restoring the 12-year Kirchner legacy begun by her husband, Nestor Kirchner, in 2003 and considered by Weisbrot to be among the most successful presidencies in the Western Hemisphere.

More appropriate than Argentina as a model for what can be achieved by a government working in partnership with its central bank is that of Japan, where Prime Minister Shinzo Abe has funded his stimulus programs by selling government bonds directly to the Bank of Japan. The BOJ now holds nearly 50% of the government’s debt, yet consumer price inflation remains low — so low that the BOJ cannot get the figure up even to its 2% target.

AMLO is unlikely to go that route, because he has vowed not to interfere with the central bank; but analysts say he needs to introduce some sort of economic stimulus, because Mexico’s GDP has slipped in the last year. The Mexican president has criticized GDP as the ultimate standard, advocating instead for a model of development that incorporates wealth distribution and access to education, health, housing and culture into its measurements.

But as Kurt Hackbarth warned in Jacobin in December, “To fully unfurl [his] program without simply ransacking other line items to pay for it will require doing something AMLO has up to now categorically ruled out: raising taxes on the rich and large corporations which, not surprisingly, make out like utter bandits in Mexico’s rigged financial system.”

AMLO has continually vowed, however, not to raise taxes on the rich. Instead he has enlisted Mexico’s business magnates as investors in public-private partnerships, allowing him to avoid the “tequila trap” that brought down Argentina and Mexico itself in earlier years — getting locked into debt to foreign investors and the International Monetary Fund. Mexico’s business leaders seem happy to invest in the country, despite some slippage in GDP.

As noted by Carlos Slim, Mexico’s wealthiest man, “Debt didn’t go up, there is no fiscal deficit and inflation came down.” In November 2019, the Economy Secretariat reported that foreign direct investment showed a 7.8% increase in the first nine months of that year compared with the same period in 2018, reaching its second highest level ever; and at the end of 2019 the peso was up around 4%. Stocks also rose 4.5%, and inflation dropped from 4.8% to 3%.

Partnering with local businessleaders is politically expedient, but public/private partnerships can be expensive; and as U.K. Professor Richard Werner points out, tapping up private investors merely recirculates existing money in the economy. Better would be to borrow directly from banks, which create new bank money when they lend, as the Bank of England has confirmed. This new money then circulates in the economy, stimulating productivity.

Today, the best model for that approach is China, which funds infrastructure by borrowing from its own state-owned banks. Like all banks, they create loans as bank credit on their books, which is then repaid with the proceeds of the projects created with the loans. There is no need to tap up the central bank or rich investors or the tax base. Government banks can create money on their books just as central banks and private banks do.

For Mexico, however, using its public banks as China does would be something for the future, if at all. Meanwhile, AMLO has been a trailblazer in showing how a national public banking system can be initiated quickly and efficiently. The key, it seems, is just to have the political will — along with massive support from the public, the legislature, local business leaders and the military.