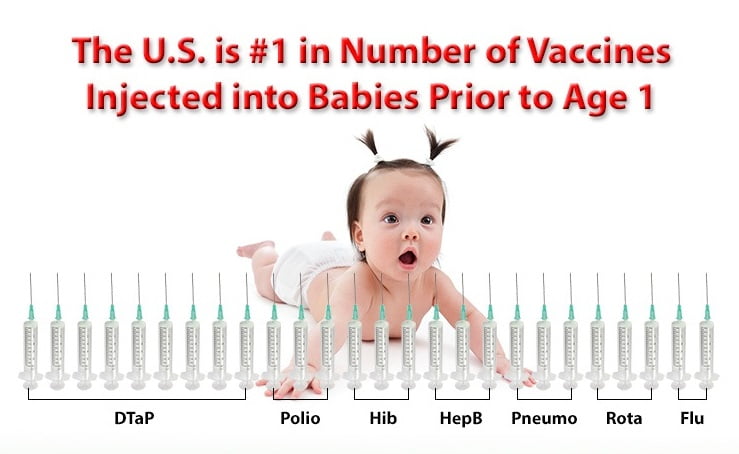 In her meticulously referenced testimony submitted to the Massachusetts legislature which is considering whether to eliminate religious exemptions from the childhood vaccination schedule, Meryl Nass, MD, board member of the Alliance for Human Research Protection, laid out the facts to refute the Pharma-orchestrated propaganda about vaccines.

First: “there is no crisis (no epidemic of deaths or disabilities) from infectious diseases caused by unvaccinated children, either in Massachusetts or the United States.”

She pointed out that “the elephant in the auditorium today is Pharma profits.” Merck lists on its website over 1,000 candidates for state and federal offices to whom it “contributed” money in 2018.

Pharma money purchases the allegiance of our major media corporations: in addition to its expenditure for advertising to consumers — $6.4 billion — Pharma spent in 2016, Pharma spent $29.9 billion on medical marketing.

“Pharma’s latest risky strategy is trying to rid the world of vaccine exemptions, to prevent vaccine opt-outs–before a new crop of vaccines, with inadequate safety and efficacy testing. Vaccines for which Pharma will have no liability once they are placed on the childhood schedule.”

Dr. Nass points out the added danger that government waivers of vaccine liability posed for children.

“waivers discourage manufacturers from ensuring that the vaccines they sell are as safe and effective as possible. The removal of vaccine exemptions, combined with liability waivers for vaccine side effects and recently loosened standards for licensing vaccines, create a highly toxic mix.”

My name is Dr. Meryl Nass.

The elephant in the auditorium today is Pharma profits.  Dare I say out loud that our children’s arms and bodies are the delivery system for transferring money from the citizens of the Commonwealth to the pharmaceutical industry?

This is not debatable[8]–there are dozens of studies proving it. Merck has a list on its website of over 1,000 candidates for state and federal offices to whom they gave money in 2018[9]. Merck also lists payments to hundreds of professional medical organizations, patient organizations, Pharma lobbying groups, and scores of Republican and Democratic PACs and committees.[10] Julie Gerberding, the former CDC Director, became president of Merck Vaccines as soon as she was allowed.[11] The last FDA Commissioner just left for Pfizer.[12]  The revolving door is slamming Americans.

Pharmaceutical manufacturers spent $6.4 billion on direct-to-consumer advertising in the US in 2016, and $29.9 billion total on medical marketing.[13] Pharma money purchases the allegiance of our major media corporations, in addition to buying advertising.  And it’s tax deductible.

The pharmaceutical industry does not play by the rules you and I must follow.  Instead, the industry makes it a rule to break the law, regularly paying civil and criminal penalties in the billions of dollars. Big Pharma CEOs have not been sent to jail in decades, and paying settlements for their illegal behaviors has become simply the cost of doing business.

This is an industry that has thrived by taking big risks–even when manufacturers knew in advance that their products killed. Merck paid out $4.85 billion to settle 27,000 Vioxx injury claims, after it was estimated the drug caused 38,000 deaths from heart attacks.[14]  But annual sales had topped $2.5 billion/year, likely leading them to at least break even.

According to Public Citizen:

“From 1991 through 2015, a total of 373 settlements were reached between the federal and state governments and pharmaceutical manufacturers, for a total of $35.7 billion.”

Pharma’s latest risky strategy is trying to rid the world of vaccine exemptions, to prevent vaccine opt-outs–before a new crop of vaccines, with inadequate safety and efficacy testing,[15] and for which they will have no liability once placed on the childhood schedule, are approved.

I doubt this is what you have been told. But the industry moves deliberately, one step at a time.  First it got the 21st Century Cures Act passed, in November 2016. This Act:

Getting a vaccine approved for use during pregnancy is the newest Pharma gold rush. This despite evidence[16] [17] (which CDC disputes) that flu vaccine is associated with a doubling of miscarriage rates, and evidence that anthrax vaccine increases the miscarriage rate.[18] Neither flu nor Tdap vaccines were tested and approved by FDA for use in pregnancy.  According to the WHO[19]:

“…pre-licensing clinical trials of vaccines do not usually include pregnant and lactating women. Reports available also provide limited post-licensing data, as once again, pregnant women are usually not included in clinical trials. This in turn has limited the ability to make evidence-based decisions and provide optimal guidance on the use of vaccines in this population.”

Despite this, pregnant women are being told to receive both flu and Tdap vaccines during every pregnancy.  Don’t you see something sick in this?

The year-long media blitz over measles didn’t only usher in bills to remove vaccine exemptions.  It was also a bonanza for sales.  Merck, which makes the only measles vaccines in the US, saw sales of its MMRV vaccine increase 58% in 2019.[20]

It has been claimed that vaccines are, by nature, extremely safe. Yet vaccines are usually injected, bypassing all the body’s natural barriers. Even minute contamination or inadequate microbial inactivation can maim or kill.  Contaminated batches of vaccine do occur.[21] Usually contaminated lots are discarded, but in the case of anthrax, polio and other vaccines, millions of doses were used.[22] [23]

Vaccines have caused many autoimmune disorders, from Guillain-Barre syndrome to narcolepsy. (Both were side effects of swine flu vaccines used in the 2009 pandemic.)

Vaccines appear safe because the immediate side effects are usually mild and temporary.  Serious vaccine side effects often take weeks or months to surface, and by then it is difficult to know what caused them.  Only when vaccinated individuals have rates of illness at least 10 times higher than the unvaccinated, is the side effect likely to be linked to the vaccine.

A 2009 European swine flu vaccine (GSK’s Pandemrix) caused over 1300 cases of severe narcolepsy, mostly in adolescents.[24]  This vaccine was linked to narcolepsy because 15 times the usual number of narcolepsy cases suddenly appeared in clinics.  Countries that bought the swine flu vaccines, through WHO, were required to waive manufacturer liability as a condition of purchase. Litigation by those injured continues to be active in the UK, where both the manufacturer and the UK government deny any responsibility for injuries.

To summarize, below are all the currently required vaccines for Massachusetts schoolchildren, and the risks related to the diseases they can prevent.  It should be obvious that increasing 96-97% vaccination rates another 2% or 3% will have a negligible effect on these illnesses:

On the other hand, vaccine injuries are not trivial.  Most serious vaccine injuries involve autoimmune illnesses and/or neurological injuries that affect personality and intelligence.  While I cannot tell you the rate at which these injuries occur, because the medical literature is inconsistent, they are not rare. You probably know a family with a vaccine-injured member.

Were the Legislature to remove most vaccine exemptions, it would probably not prevent a single death from infection, and prevent only a modicum of illness.  However, significant vaccine injuries would almost certainly occur in currently exempted children.

The seminal Supreme Court case regarding a state or municipality’s authority to institute a mandatory vaccination program is Jacobson v Massachusetts. While this 1905 Supreme Court decision upheld the right of Cambridge, MA to impose smallpox vaccination on adults over 21 during a smallpox epidemic, according to the Congressional Research Service, the Court “did acknowledge limits to the state’s power to protect the public health, and set forth a reasonableness test for public health measures:

[I]t might be that an acknowledged power of a local community to protect itself against an epidemic threatening the safety of all, might be exercised in particular circumstances and in reference to particular persons in such an arbitrary, unreasonable manner, or might go so far beyond what was reasonably required for the safety of the public, as to authorize or compel the courts to interfere for the protection of such persons.”[32]

Furthermore, the penalty Jacobson paid was $5.00–or about $150 today.  He was not forced to be vaccinated, even when smallpox had a 30% mortality rate.  He paid a reasonable fine.

In the bills we are discussing today, the penalty for refusing vaccinations is insuperably harsh. The value of an education to a family is incalculable, but might be valued in the hundreds of thousands of dollars.[33]

In US law, the doctrine of proportionality means that the punishment should fit the crime.[34] In the Jacobson case, the punishment for remaining unvaccinated was about $150, not the $150,000 or more cost of an education. As for the bills under discussion today, don’t they, as the Supreme Court noted, “go so far beyond what was reasonably required for the safety of the public…” — suggesting the courts should interfere to protect the unvaccinated?  If versions of these bills pass, won’t the Commonwealth become entangled in litigation over them for years to come?

Parallel with the effort to end non-medical vaccine exemptions is a major federal/state effort to restrict medicalexemptions.

The bedrock expectation of medical ethics is that patients must give informed consent for all medical procedures, including vaccines.

Informed consent means that patients must be informed about the procedure, have the right to refuse, and may not be coerced to accept it.  Isn’t withholding an education an extreme form of coercion?

Without any discussion of its moral or ethical dimensions by media, medical societies or government officials, the requirement for informed consent for medical procedures, including vaccinations, vanishes in the blink of an eye when patients are not allowed the right to refuse.

Must the issue of childhood vaccine exemptions be politicized?

Thank you very much for your consideration.  I would be happy to answer your questions or provide additional documentation for any of these points.

Read the full article at AHRP.org.

“Gerberding joined Merck as president of Merck Vaccines in January 2010. Since then, Merck’s vaccines are reaching more people than ever, and Merck became the global leader in the vaccine market based on sales. In addition, the Sanofi Pasteur MSD joint venture in Europe, Merck’s European vaccine business for which Gerberding is the Board co-chair, has improved in both population reach and financial performance. She also helped lead the successful launch in India of the Merck Wellcome Trust non-profit joint venture for vaccine development”