The fake coronavirus pandemic now being promoted around the world is aimed at creating a world republic, P3 Freemason sources say.  The coronavirus fear is also being used by the U.S. Corporation as an excuse for their February 16th default.  Just like the proverbial schoolboy who said, “The dog ate my homework.”  These people are saying, “The virus ate my financial system.”  That is more face-saving than saying, “I got cut off because I haven’t been paying my bills for 40 years.”  In any case, what this means is they have lost the ability to create central bank funny money to prop up markets and keep themselves in power.

The owners of the U.S. Corporation have been using a coincidental mention of a deadly virus in a 1980’s book to propagate the message they have planned these events years ago.  They used this to tell the Asians to “rollover our bonds or face the music.”

The propaganda rag Popular Mechanics, of 9.11 BS infamy, has contributed to their fear-mongering with the following headline:

“Welp, Scientists found 28 new virus groups in a melting glacier.  This is how the world ends.” https://www.popularmechanics.com/science/health/a30643717/viruses-found-melting-glacier/

The answer given was “we will face the music,” Asian Secret Society sources say.  “When the current battle of humanity versus the virus ends, a new battle will begin for sure.” they acknowledge, indicating they are in for the long haul.

The good guys in the West, for their part, know the Chinese characters for crisis 危機 mean “danger” and “opportunity,” and are using this default to try and usher in a more benevolent system for taking care of the planet Earth.

To this end the White Dragon Society has proposed the activation of a “Project Blue Beam” type event to the Anglo Saxon, “Five Eyes” alliance, WDS sources say.  Project Blue Beam is a fake end-times scenario using holograms, computer graphics, and real military displays, they say.  The idea would be to stage what is known as a liminal event, something like a wedding or a coming of age planetary ceremony, the sources explain.  The proposal has not been finalized at this point, they add.

While attempts have been made to debunk Project Blue Beam, https://allthatsinteresting.com/project-blue-beam-serge-monast  there can be no doubt it’s technically possible.  The ability to project giant holograms in the sky was proven in combat during the second Iraq war.  Also, the use of computer graphics on TV news could now easily create a WWIII type scenario.  By adding military forces in action, it would be easy to convince the sleepwalking majority that the event was real.  Insiders like the readers of this newsletter could just relax and enjoy the show.

In any case, there can be no doubt that the ongoing coronavirus panic is designed to pave the way for emergency military rule and the start of a world republic.  What people need to keep in mind though, is that it’s all fake.  Here, for example, is a frontline report from Italy on the pandemic:

“80% of all sick people heal by themselves, 15% need medication and 5% need to have hospital attention.  All 17 people who died already, had advanced health issues.  No healthy person who caught the coronavirus has died.  It’s an alarm with no foundation.  In the beginning they reacted the way they did because they didn’t have any real information about the virus.  But after seeing what it is, the information is too exaggerated.”

Before we describe more fakery though, we need to also point out some very serious special forces’ battles that are unfolding in several key locations around the world.  The most important action is now taking place in…

“We believe Baron Nathaniel Rothschild is housed at a compound in Zug, Switzerland.  SIS has been dispatched to ‘dislodge’ this last obstacle.  Switzerland is tricky because it is home to the CIA, as I am sure you already know, and also in the more esoteric world a group called Swiss Octagon, who are what remains of the pharaonic bloodlines and pretty tough/dark characters at that.”

It is interesting to note that Japanese Royal Family sources have previously told us they also came from Egyptian pharaonic bloodlines.  That is why a serious battle is also taking place in Japan, according to Japanese right-wing sources.  In order to force the Zionist puppet government of Shinzo Abe out of power the 2020 Tokyo Olympics will be canceled, Japanese right-wing sources say.  This will cause huge financial losses for Abe and his gangster friends and thus leave them open to payback, the sources added.

On the surface in Japan, there is already deep panic about the so-called “novel coronavirus.”  So far, schools have been closed nationwide, concerts and public events have been canceled and stores are running out of supplies.  The photo below of a local supermarket, for example, shows all toilet paper and facial tissues have vanished from the shelves. 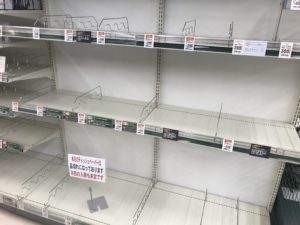 CIA sources confirm the “Zionist cabal is now being dismantled (it has been in play for over a year already).”  They say the very top Zionists have gathered at the “den” in Zug Switzerland where they are being rounded up and readied for military tribunals.

The Zionist cabal is literally fighting for its life and is staging a massive propaganda attack against China with fake videos of people hanging themselves or throwing themselves out of windows, plus fake news about how half the country is dead already.

However, people I talk to in China say life is getting back to normal.  Japanese businessmen who deal with China tell me dozens of factory managers they talk to tell them work is resuming.  What is not resuming, though, is trade with the U.S. because the U.S. Corporation has had its credit cut off, Chinese sources say.  That is why instead of admitting they can’t get stuff from China because they defaulted, the Zionist propaganda is saying the reason is “everybody in China died.”

“President Donald Trump has publicly declared the coronavirus a hoax but has been forced to backtrack by the political circus.  He knows this was a false flag, he knows who is responsible, and he knows he is being lied to by both the CDC (which is managed by Never Trumper Nancy Messonnier who is Rod Rosenstein’s sister) and the CIA (managed by John Brennan camp follower Gina Haspel)…the story in all its nuances includes a combination of biowarfare, 5G and satellite lowered immunity and radiation sickness misdiagnosed as the new virus (which is no worse than past viruses), and the information war waged by the City of London and Wall Street for insider trading and profit-taking.”

There are reports now of fake coronavirus testing kits being sent around the U.S. as part of the scam to blame bankruptcy on a pandemic.  There are also reports that the virus combines HIV and Ebola.  The Pope has joined the circus by saying he has the new coronavirus and is speaking to the public from behind glass.

Before you give in to the urge to panic though, please think back to Fukushima after March 11, 2011. The media, especially the fake media, was full of stories of how this was “an extinction-level event.”  Yet here I sit 200 kilometers from Fukushima and can report firsthand that there is no unusually high radiation and in fact, there was not even one death in Tokyo from radiation due to this Zionist fear show.

What is real though is that close to 20,000 people died from a tsunami caused by nuclear weapons planted in the seabed.  Rest assured military tribunals will bring the perpetrators to justice.  Mark my words…Benjamin Netanyahu et al will face a Nuremberg type trial.

The battle for the planet Earth is now entering a cleanup phase.  One group that still has not surrendered is the German faction.  MI6 summed up the situation in this way:

“The Germans are hopping mad about Brexit so they will kick and scream as their EU project breaks up before their eyes.  The Vatican is already over and done.”

Related to this is a huge fight in Malaysia aimed at preventing the public disclosure of flight 370-17 that would expose the Bilderberger-Nazi-Dutch royals.  Prime Minister Mahathir Mohammed has been temporarily ousted from power as a result, but the battle is far from over.  It’s certainly no coincidence in this context that Goldman Sachs-linked fugitive financier Jho Low was spotted in Wuhan, China just around the time of the “coronavirus outbreak.” https://www.channelnewsasia.com/news/asia/coronavirus-1mdb-jho-low-spotted-in-wuhan-china-malaysia-police-12453776

In the Middle East, meanwhile, we are starting to see a de facto alliance between Turkey and Israel as both countries realize that only together can they prevent Russia and the U.S. military from removing their governments from power.  Turkey has begun flooding Europe with refugees again while threatening to close the Bosphorus Straits.  Israel, of course, is using its usual blackmail be it biological, sexual, nuclear or otherwise.

In fighting these people remember, you have nothing to fear but fear itself.  Love is the most powerful force in the universe and will win for sure.