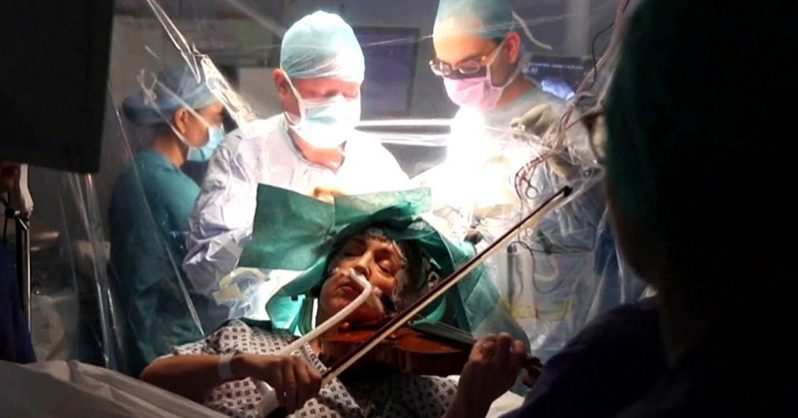 There are many reasons why someone may have to undergo brain surgery. It could be to remove an aneurysm or a tumor, drain blood or infection, free a nerve, or even simply to take a sample of brain tissue to diagnose a disease of the nervous system [1].

Regardless of the reason, brain surgery is a major operation that can take several hours. Any type of surgery will have associated risks, however, the stakes involved with brain surgery are much higher, because your brain is such an important organ. Depending on which area of the brain is being operated on, brain surgery could lead to problems with speech, memory, muscle weakness, balance, vision, coordination, and other functions. These issues could be temporary, or they could last a lifetime [1].

Having to undergo brain surgery is scary for anyone, but particularly for Dagmar Turner, who feared her surgery would affect her ability to play music. Her doctors, however, used a unique technique to prevent that from happening [2].

A Soundtrack to Surgery

In order to preserve her ability to play her instrument, doctors woke her up in the middle of the operation and had her play the violin to ensure they did not compromise parts of the brain that control precise hand movements and coordination.

“We knew how important the violin is to Dagmar so it was vital that we preserved function in the delicate areas of her brain that allowed her to play,” said Keyoumars Ashkan, a neurosurgeon at King’s College Hospital. “We managed to remove over 90 percent of the tumour, including all the areas suspicious of aggressive activity, while retaining full function in her left hand.” [4]

While playing the violin during surgery is unique, having patients be awake during surgery is not new. The operation Turner had is known as an “awake craniotomy”, which is a procedure performed on the brain when the patient is awake and alert. It is generally used to treat some types of brain tumors or epileptic seizures [5].

Normally, a patient needs to be awake during surgery if the tumor or the area of the brain where their seizures are taking place is near the regions of the brain that control vision, movement, or speech. The surgeon will ask the patient questions during surgery to ensure that he or she is treating the correct part of the brain while minimizing damage to these regions [5].

Turner’s case is not the first time that a patient has played music during brain surgery. In 2017, 25-year-old Dan Fabbio, who was working on a master’s degree in music education, played the saxophone during surgery to ensure he did not lose his ability to play, and subsequently his life’s passion as well as his profession [6].

Awake craniotomies have been used for decades, with the basic principles of the procedure remaining largely unchanged. New technology, however, allows doctors to actually create a detailed map of the patient’s brain before surgery using a functional MRI.

Functional Magnetic Resonance Imaging (fMRI) measures small changes in blood flow that occur with brain activity and can be used to determine which parts of the brain are handling critical functions [7]. A simple fMRI experiment would be having a patient alternate between doing a simple task and a control state. This could mean looking at an image for thirty seconds followed by closing the eyes for thirty seconds. The data from the fMRI is then used to match the area of the brain where the changes occurred with the stimulus [8].

This technology means that doctors have significantly more information about their specific patient before beginning surgery, and allows them to tailor tests to that patient [3].

For example, during Fabbio’s MRI, doctors had him listen to piano melodies and hum them back while they scanned his brain. This made it possible for them to locate the specific areas of the music teacher’s brain responsible for music and language processing, and from there make a highly detailed 3D map of his brain [6].

Dr. Brad Mahon, a cognitive neuroscientist who helped develop the brain mapping program and was one of Fabbio’s doctors, explained that having a personalized brain map is extremely important when surgeons are making “millimeter by millimeter” decisions that could have a dramatic impact on the patient’s ability to simply communicate, let alone play an instrument [3,6].

The Musicians Played On

The surgery was a success for both Turner and Fabbio, and they will be able to continue to pursue their passions for the foreseeable future. As Turner serenaded doctors with Gershwin and Mahler melodies, doctors were able to successfully remove her tumor without affecting her ability to play.

“We managed to remove over 90 percent of the tumour, including all areas suspicious of aggressive activity, while retaining full function of her left hand,” said professor Ashkan [3].

After Fabbio’s surgery, doctors handed him his saxophone and he played a tune that he had planned for that exact moment. He completed it perfectly.

“He played it flawlessly, and when he finished, the entire operating room erupted in applause,” said Elizabeth Marvin, a professor of music theory who played an integral role in creating the tests used to map Fabbio’s brain. “It made you want to cry.” [6]

This technology is still relatively new, but will have far-reaching effects. With the ability to create a detailed map of a patient’s brain, doctors are now able to significantly reduce the risks involved with invasive brain surgery, and patients will be much more able to return to normal life post-surgery, whether that means playing a musical instrument, or simply retaining their ability communicate and function in everyday situations.