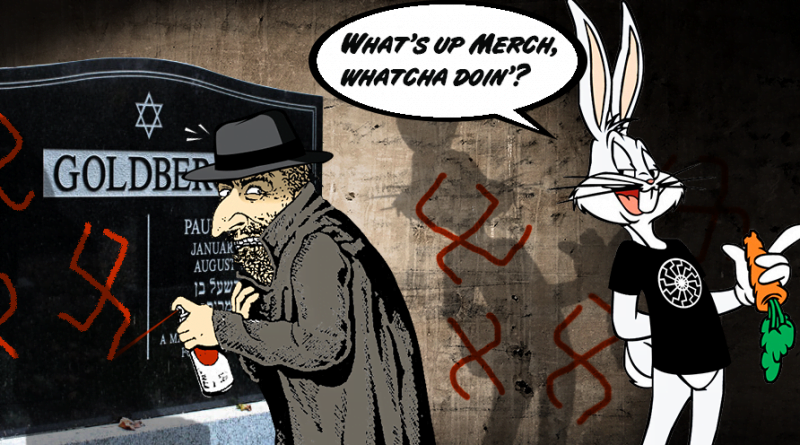 Even though distracted by the havoc resulting from the coronavirus, the United States and much of Europe is engaged in a frenzied search for anti-Semitism and anti-Semites so that what the media and chattering class are regarding as the greatest of all crimes and criminals can finally be extirpated completely. To be sure, there have recently been some horrific instances of ethnically or religiously motivated attacks on synagogues and individual Jews, but, as is often the case, however, quite a lot of the story is either pure spin or politically motivated. A Jewish student walking on a college campus who walks by protesters objecting to Israel’s behavior can claim to feel threatened and the incident is recorded as anti-Semitism, for example, and slurs written on the sides of buildings or grave stones, not necessarily the work of Jew-haters, are similarly categorized. In one case in Israel in 2017, the two street swastika artists were Jews.

Weaponizing one point of view inevitably limits the ability of contrary views to be heard. The downside is, of course, that the frenzy that has resulted in the criminalization of free expression relating in any but a positive way to the activity of Jewish groups. It has also included the acceptance of the dishonest definition that any criticism of Israel is ipso facto anti-Semitism, giving that nation a carte blanche in terms of its brutal treatment of its neighbors and even of its non-Jewish citizens.

Jewish dominated Hollywood and the entertainment media have helped to create the anti-Semitism frenzy and continue to give the public regular doses of the holocaust story. Currently there are a number of television shows that depict in one form or another the persecution of Jews. Hunters on Amazon is about Jewish Americans tracking and killing suspected former Nazis living in New York City in the 1970s. The Plot to Destroy America on HBO is a retro history tale about how a Charles Lindbergh/Henry Ford regime installs a fascist government in the 1930s. One critic describes the televisual revenge feast “as one paranoid Jewish fantasy after another advocating murder as the solution to what they perceive as the problem of anti-Semitism.”

But, as always, nothing is quite so simple as such a black and white portrayal where there are evil Nazis and Jewish victims who are always justified when they seek revenge. First of all, as has been demonstrated, many recent so-called anti-Semitic attacks on Jews involve easily recognizable Hasidic Jews and are actually based on community tensions as established neighborhoods are experiencing dramatic changes with the newcomers using pressure tactics to force out existing residents. And after the Hasidim take over a town or neighborhood, they defund local schools to support their own private academies and frequently engage in large scale welfare and other social services fraud to permit them to spend all their days studying the Talmud, which, inter alia teaches that gentiles are no better than beasts fit only to serve Jews.

The recent concentration of coronavirus in Orthodox neighborhoods in New York as well as the eruption of measles cases last year have been attributed to the unwillingness of some conservative Jews to submit to vaccinations and normal hygienic practices. They also have persisted in illegal large gatherings at weddings and religious ceremonies, spreading the coronavirus within their own communities and also to outsiders with whom they have contact.

Regularly exposing anti-Semitism is regarded as a good thing by many Jewish groups because the state of perpetual victimization that it supports enables them to obtain special benefits that might otherwise be considered excessive in a pluralistic democracy. Holocaust education in schools is now mandatory in many jurisdictions and more than 90% of discretionary Department of Homeland Security funding goes to Jewish organizations. Jewish organizations are now lining up to get what they choose to believe is their share of Coronavirus emergency funding.

Claims of increasing anti-Semitism, and the citation of the so-called holocaust, are like having a perpetual money machine that regularly disgorges reparations from the Europeans as well as billions of dollars per year from the U.S. Treasury. Holocaust and anti-Semitism manufactured guilt are undoubtedly contributing factors to the subservient relationship that the United States enjoys with the state of Israel, most recently manifested in the U.S. Department of Defense’s gift of one million surgical masks to the Israel Defense Force in spite of there being a shortage of the masks in the United States (note how the story was edited after it first appeared by the Jerusalem Post to conceal the U.S. role but it still has the original email address and the photo cites the Department of Defense).

And then there is the issue of Jewish power, which is discussed regularly by Jews themselves but is verboten to gentiles. Jews wield hugely disproportionate power in all the Anglophone states as well as in France and parts of Eastern Europe and even in Latin America. If anti-Semitism is as rampant as has often been claimed it is odd that there are so many Jews prominent in politics and the professions, most especially financial services and the media. Either anti-Semitism is not really “surging” or the actual anti-Semities have proven to be particularly incompetent in making their case.

Further muddying the waters, there have been a number of instances in which Jews have themselves been responsible for what have been claimed to be anti-Semitic incidents. There has also been credible speculation that some of the incidents have been false flags staged by the Israeli government itself, presumably acting through its intelligence services. The objective would be to create sympathy among the public in Europe and the U.S. for Israel and to encourage diaspora emigration to the Jewish state. The recent tale of Israeli-American Michael Kadar, who has been credited with many of early 2017’s nearly two thousand bomb scares targeting Jewish community centers and synagogues worldwide, is illustrative.

Kadar, who holds both Israeli and American nationality, was arrested in Ashkelon Israel on March 2017 by Israeli police in response to the investigation carried out by the Federal Bureau of Investigation. Kadar’s American address was in New Lenox Illinois but he actually resided in Israel. Kadar’s defense was that he had a brain tumor that caused autism and was not responsible for his actions, but he was found to be fit for trial and was sentenced to 10 years in prison in June 2017. He was apparently subsequently quietly released from prison and returned to Illinois in mid-2018. In August 2019 he was arrested for violation of parole on a firearms and drugs offense.

The court in Tel Aviv convicted Kadar on counts including “extortion, disseminating hoaxes in order to spread panic, money laundering and computer hacking over bomb and shooting threats against community centers, schools, shopping malls, police stations, airlines, and airports in North America, Britain, Australia, New Zealand, Norway and Denmark.” It claimed that “As a result of 142 telephone calls to airports and airlines, in which he said bombs had been planted in passenger planes or they would come under attack, aircraft were forced to make emergency landings and fighter planes were scrambled.”

It was also claimed by the court that Kadar had gotten involved with the so-called restricted access “dark web” to make threats for money. He reportedly earned $240,000 equivalent worth of the digital currency Bitcoin. Kadar has reportedly refused to reveal the password to his Bitcoin wallet and its value is believed to have increased to more than $1 million.

The tale borders on the bizarre and right from the beginning there were many inconsistencies in both the Department of Justice case and in terms of Kadar’s biography and vital statistics. After his arrest and conviction, many of his public, private and social networking records were either deleted or changed, suggesting that a high-level cover-up was underway.

Most significant, the criminal complaint against Kadar included details of the phone calls that were not at all consistent with the case that he had acted alone. The threats were made using what is referred to as spoofing telephone services, used by marketers to hide the caller’s true number and identify, but the three cell phone numbers identified by the Department of Justice to make the spoofed calls were all U.S.-based and one of them was linked to a Jewish Chabad religious leader and one to the Church of Scientology’s counter-intelligence chief in California. In addition, some of the calls were made when Kadar was in transit between Illinois and Israel, suggesting that he had not initiated the calls.

DOJ’s criminal complaint also included information that the threat caller was a woman who had “a distinct speech impediment.” Michael Kadar’s mother has a distinct speech impediment. Oddly enough she has not been identified in any public documents and the Israelis claimed that Michael was disguising his voice, but she is believed to be Dr. Tamar Kadar, who resided in Ashkelon at the same address as Michael. Dr. Kadar is a chemical weapons researcher at the Mossad-linked Israel Institute for Biological Research (“IIBR”).

Michael appears to have U.S. birthright citizenship because he was born in Bethesda in 1990 while his mother was a visiting researcher at the U.S. Army Military Research Institute of Infectious Diseases (USAMRIID). While Dr. Kadar was at USAMRIID, anthrax went missing from the Army’s lab and may have been subsequently used in the 2001 anthrax letter attacks inside the U.S., which resulted in the deaths of five people. The FBI subsequently accused two USAMRIID researchers of the theft, but one was exonerated and the other committed suicide, closing the investigation.

So, there are some interesting issues raised by the Michael Kadar case. First of all, he appears to have been the fall guy for what may have been a Mossad directed false-flag operation actually run by his mother, who is herself an expert on biological weapons and works at an Israeli intelligence lab. Second, the objective of the operation may have been to create an impression that anti-Semitism is dramatically increasing, which ipso facto generates a positive perception of Israel and encourages foreign Jews to emigrate to the Jewish state. And third, there appears to have been a cover-up orchestrated by the Israeli and U.S. governments, evident in the disappearance of both official and non-official records, while Michael has been quietly released from prison and is enjoying his payoff of one million dollars in bitcoins. As always, whenever something involves promoting the interests of the state of Israel, the deeper one digs the more sordid the tale becomes. 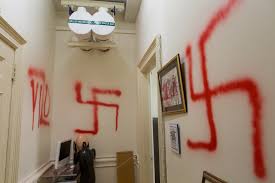 Philip M. Giraldi, Ph.D., is Executive Director of the Council for the National Interest, a 501(c)3 tax deductible educational foundation (Federal ID Number #52-1739023) that seeks a more interests-based U.S. foreign policy in the Middle East. Website is councilforthenationalinterest.org, address is P.O. Box 2157, Purcellville VA 20134 and its email is [email protected].