When asked by the press if the Fed was concerned about how it has increased wealth disparity in the US with its policies, Papa Powell kept clearing his throat and parading his lamest thoughts.

“Inequality is not related to monetary policy,” he claimed in the Fed’s defense. 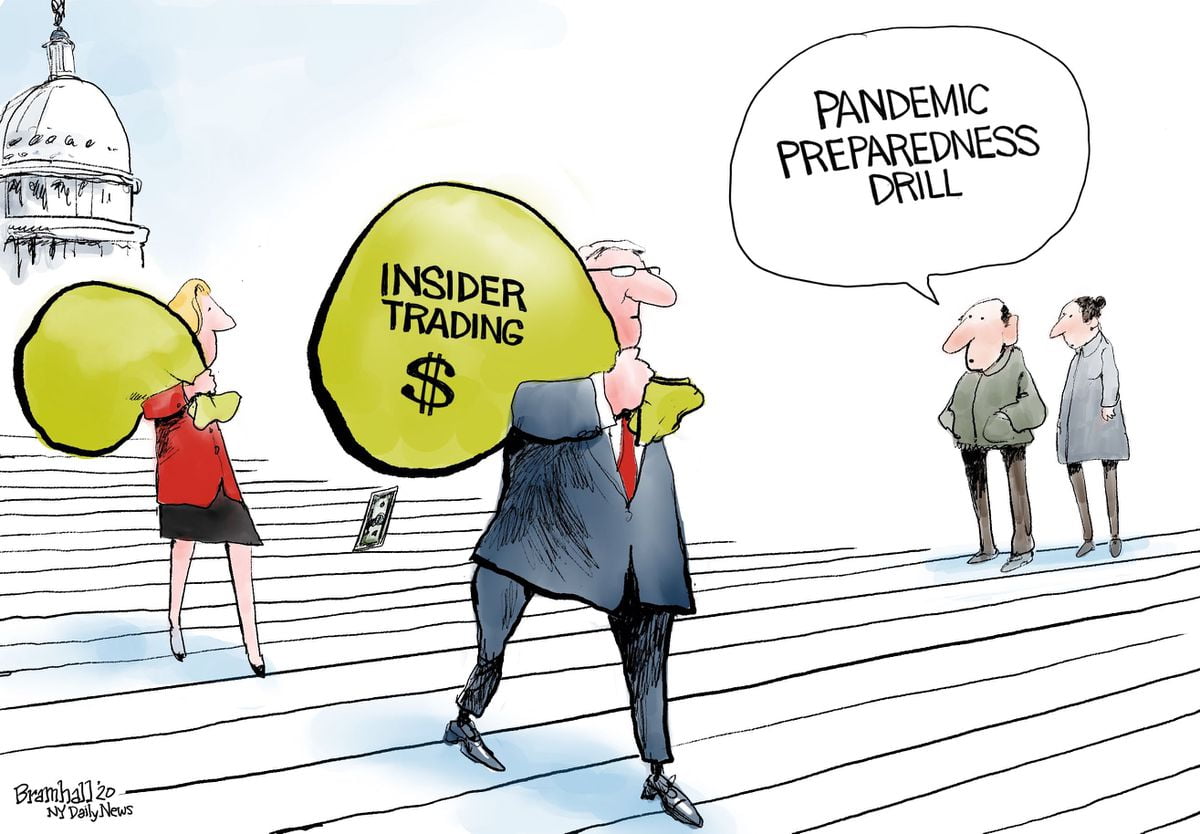 Powell did not answer the question directly but gave a meandering answer on the role of the Fed. Powell has a poker “tell.” When he knows his answer is disingenuous, he starts repeatedly clearing his throat. He did a lot of that while bumbling through his non-answer

Ironically, for a globalist, Powell tried to blame income inequality on globalization. He’s right about that to some extent, of course, in that forcing US workers to compete with incoming foreign workers willing to work for far less has long suppressed US wages in those fields (literally) where the immigrants congregate

How the rich get Fed

Powell dissembled by saying the chasm of income disparity, which grew substantially larger during the Fed’s Great Recovery (which was recovery only of the already great) is not due to the Fed because, he said, that problem has been around for four decades … as if the Fed has not!

There is no more subversive entity in the US, more destructive, more inflammatory yet out of the spotlight of public outrage, than the Federal Reserve: it is the Fed’s actions over the past 108 years – and especially over the past decade – that have spawned much of the anger, resentment and hatred that has permeated US society to its very core as a result of the Fed’s monetary policies.

Yet because much of the public fails to grasp the insidious implications of endless money-printing which makes owners of assets exorbitantly rich at the expense of regular workers, popular anger at the Fed remains virtually non-existent….

And so, taking advantage of the general public’s general gullibility, the Fed continues to lie and dissemble at every opportunity, of which the most recent example was last week when Powell said that “inequality has been with us … increasingly for four decades” … arguing that monetary policy is not a cause for that. What he forgot to mention is that four decades ago is when the Nixon closed the gold window….

That is the crux of the matter because leaving the gold standard gave the Fed a LOT more room to play with money supply so that its expansion directly feeds the rich. It took them a little while to figure out how to make that work and to get government to play along with legal deregulation that would give them the remaining freedoms they needed, but they got there:

The government’s low capital-gains tax rate is one of the ways the government played along to benefit the rich almost exclusively because the rich make most of their money off of capital gains, instead of by creating new factories or by their hard work. The pour and middle class do not.

That tax break entices the rich to endlessly recycle their winnings in more assets to resell to make more gains, producing nothing and contributing nothing to the economy while getting vastly rich and amplifying the stock market asset bubble.

The Fed’s policies direct all new money to banks first and foremost, which then invest in stocks or bonds to make quick money by selling assets for gains. The average person doesn’t even begin to have the money needed to play in stratosphere.

Another way the government had to be brought around was the Fed’s enticement (under Alan Greenspan) to deregulate away the Glass-Steagall Act so that investment banks and commercial banks would lose the demarkation between them, allowing banks more freedom to play in the stock market.

Once those shifts were completed, the rich could rise on the Fed’s magic money carpet.

Long ago in a time forgotten, the poor and middle class made respectable money off of banks back when banks didn’t charge fees for the average person to keep their money there, as they felt privileged to hold your money. Before all this Fed intervention in credit markets and interest rates, banks paid you more than you can make on today’s most extravagant government bonds — 5% interest. That’s why …

Michael McKee of Bloomberg TV, challenged Powell on his answer, stating this:… “Inequality is not just about wages. It’s also about wealth and a number of studies have suggested that by keeping rates low for so long and targeting the markets after the Great Financial Crisis, that the Fed did contribute to wealth inequality in this country.

The average person cannot save for retirement with any hope of making safe income on his money. He or she has to put it all at risk in stocks in order for it to build even enough to keep up with inflation. Bonds are low to negative in yield, and bank interest is a joke. So, you’re pressed toward risking your retirement in stocks, whether you want to or not … or never having enough to retire on.

This decade of unprecedentedly low interest rates deprived savers (people who cannot afford the risk of the stock market) of the 4 and 5 percent interest they had been able to earn on safe instruments like Treasury notes and federally-insured Certificates of Deposit before the financial crisis.

Heck, you used to be able to get that much interest just by salting the money away in an ordinary savings account, and it was insured!

At the same time, the risky stock market has more than once wiped out retirees’ funds.

Powells responses were as disingenuous as his predecessor, Janet Yellen, when she used to pretend to worry about either wealth or income disparity in the US.

The average person is underFed while the rich are overFed

I’m hard pressed to see the trickle in wages that have remained stagnant (or worse) when adjusted for inflation since the early 1970s (back when real interest was actually paid on savings accounts like I’m talking about):

It appears they didn’t emphasize the world “trickle” enough … as we barely got back to flat after half a century of waiting for the trickle. All the while in between, we were much worse off.

Those low wages throughout the entire interim, don’t even count reduced benefits, such as guaranteed retirement funds. All of that, however, helped the rich corporate owners make more money. So, it’s not hard to see why the rich got richer and that nothing the Fed did ever trickled down to the rest.

Apparently a lot of blue-collar workers are content to be happy with that picture while people running banks are content to justify it. If they weren’t, they wouldn’t keep voting in governments that support tax breaks that inure mostly to the wealthy and that support a Fed that creates money that always and only goes directly into the pockets of the rich!

The change in Wall Street bonuses over that time looks really nice, though:

Here, unadjusted for inflation, is a picture of bankers and brokers salaries compared to people in other industries:

I guess the money is trickling OK into the hands of the people the Fed most likes! And all of that is before the Fed really kicked into action during the Great Recovery period (for which I couldn’t find a graph that runs back to somewhere near the 70’s.

The greatest trick the Fed ever played on the general public was convincing it that its policies were designed to directly benefit the American citizenry. They are not. They are designed to benefit its member banks and the corporatocracy that rules this country. If they were for the people, the trillions of dollars the Fed has disbursed into the financial system since the Great Recession in 2008 would have led to rising wages, faster rates of economic growth and a narrowing of the wealth disparity that is ripping this country apart. Everyone would be wealthier, but most are not. Instead, we are repeating the monetary policy steps taken in 2009 that resulted in the haves having even more, while everyone else scrambles to pick up the breadcrumbs left behind.

In other words, Papa Powell is a liar, and he gets away with it all the time!

Some of Powell’s other vapid statements:

Of course the Fed doesn’t target particular prices. (You have to parse the words carefully like when President William Jefferson Clinton said, “It depends on what the meaning fo the word ‘is’ is.”).

The Fed just targets a generally high-and-rising level of asset prices and then does “whatever it takes” to support the market from falling below that zone.

Powell also said the Fed “wants markets to be working and investors to price risk.”

I’ll wait for you to get back on your chair ….

The Fed has been a heat-sinking missile aimed at destroying any hint of price discovery it can find anywhere in stocks or bonds. Price discovery, of course, is how markets price in risk. Free markets discover a price that compensates for losses on risk and, on average, leaves an acceptable profit after the occasional losses.

The Fed sets the price of bonds by direct manipulation of the bond market. With the same actions, it creates money to pump stock prices up every time stock prices do try to fall as far as they would have to if they were to price risk and reward correctly.

Risk, as Powell just told us, has rarely looked this bad. If the Fed wanted the market to price risk, it would let the market fall, at least, 50% to match what real risks are right now. He’s not about to do that! So, he is blatantly lying, and, yet, most of burned-out bulbs watching him in congress appear didn’t even flicker when he spewed these lies.

Interest rates also price risk, but the Fed has manipulated those to zero at a time when bond holders and other creditors have rarely had more risk.

If the Fed were to stop soaking up almost-junk bonds, I guarantee investors who eventually get defaulted on because they can’t get rid of those bonds would reprice risk in a hurry. It’s only knowing the Fed has their back because it will sop up their questionable bonds that they buy the junk so cheap. (They just have to sell them to the Fed one step before they get downgraded to junk.)

It’s a wonder Powell and his predecessors manage time and again to maintain credibility with investors and government officials, except that the Fed heads feed these ninnies the narrative they want to believe.

Quarter after quarter, congress laps this swill up, as it is doing this week, and pretends it is all credible. They sit there and pretend to scowl or look concerned for the public as they question Powell while the camera is on. However, they never do anything about their voiced concerns because they know that, when the public presentation is ended, they, too, are going to the Powell Party afterward.

BREAKING: Live scenes from the Federal Reserve HQ, as they make it rain with liquidity! Printing to prosperity, to infinity and beyond! 🖨️💵 #FederalReserve #QE #Bitcoin #XRP #Gold #Silver #JeromePowell #StevenMnuchin #NeelKashkari pic.twitter.com/g2gLPTyxPb