Prepare For Change
Home Awakening DID YOU KNOW THAT FLORIDA NOW HAS A LAW THAT STATES THEY... 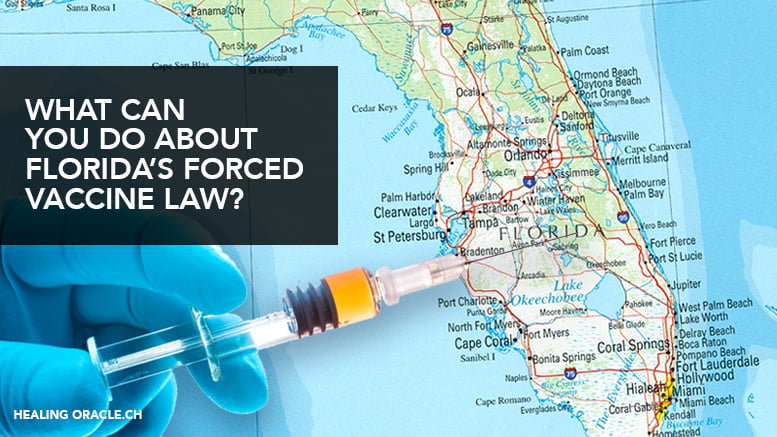 Posted By: The Healing Oracle Team

Has the tightening of laws under the lockdown led to an inevitable and unavoidable vaccine trap for so many of us?

In latest revelations it has now been discovered by residents of Florida that they actually ALREADY HAVE a mandate on Vaccines and that it is now legal to enforce vaccinate everyone in the state.

This is a huge concern for not only residents of Florida, but for everyone in the Western hemisphere. Whilst the headlines led the eye elsewhere, laws have been changed and passed that have a huge effect on the health of the entire world.

According to FL Freedom Keepers:

Join FL Freedom Keepers with special guests, LAWYERS LOUIS LEO IV and R. SHAWN MCBRIDE as they dive into understanding this law and how it effects our families.

The lawyers will explain the law and why constitutional defenses, or rights to decline treatment may not work in the case of this law.

They will also discuss what can be done about the law and how we can work together to do more.

Join us and invite your friends and family so we can raise awareness.”

With mainstream media still banging the Covid drum, some states are also seeing a surge in reported “cases”. With so much controversy over the numbers, this could of course mean anything.

Whilst the buried silver lining is that the number of deaths has reportedly declined in the last two weeks. So they cannot even fool us with that one anymore.

According to the morbid media machine Florida, apparently saw more than 4,000 new cases on Saturday, with the governor saying that the average age is now 37 for newly diagnosed cases – compared to the reported average age of 65 in March.

This is obviously intended to keep the fear factor high and leads us all down a certain road of inevitable vaccine pushing on both the young and the old.

Please read here as to why vaccines cause a dangerous immune response.

Please see this section for more on vaccines.

According to Future Done Right website in an article named: “Forced Vaccination? For Adults? Does Your State Require It”

Don’t be so quick to assume

Can you, as an adult, be forced to take a vaccine? Even if you don’t want it?

Don’t be so quick to assume you know the answer.

The shocking truth is you might be required to under your state laws.

As we have been investigating the issues a surprising number of states have forced vaccine laws on their books but they are rarely publicized.

What states have them?

We’ve found a few and we are still researching others (more on that later).

Our Journey Started With Florida

With the growth of the spread of Coronavirus Florida started paying attention to out of state visitors. In some cases these visitors had to fill out a form and quarantine themselves.

At the bottom of the form the State Of Florida declares its ability to force vaccines and cites the law.

That led me and my lawyer friends to look at Florida Statutes 381.00315 and see what the power of the state is in these situations.

The Power Of The State Is Broad

Under Florida Statutes 381.00315 the State Health Officer can — if they believe there aren’t other means of controlling the virus — force anyone to take a vaccine.

Further the State Health Officer can use law enforcement officers to make that happen.

Medical, religious and other exemptions available for childhood vaccines are not written into the Florida law.

Most people in Florida that I have spoken to are shocked by this law.

Quite clearly most citizens don’t know this law is there or the power the State of Florida has claimed. And all the power is vested in one State Health Officer.

How Is This Constitutional?

You might wonder if such power is unconstitutional. At first blush it seems that it would be a clear “no”. Especially with a line of US Supreme Court cases empowering medical choice over your body.

But in 1905 the US Supreme Court ruled that vaccines could be forced by townships in Massachusetts. And that opinion remains on the books today. And the line of cases on public health have not been overruled by the individual medical liberty cases.

Legal experts, like Alan Dershowitz, believe that this is good law and vaccines can be forced. We truly wouldn’t know until a case was developed and sent to the Supreme Court and that might be years — and many forced vaccines — in the future.

Other States Are In On This Too

After looking at Florida we wondered if other states had similar laws.

A Maryland lawyer pointed me to a similar law in Maryland. Under the Maryland law the governor can order vaccines. Maryland goes a step farther than Florida and allows the governor to also force a health care personnel to give the vaccine to the forced individual.

So far we have uncovered forced vaccine laws in Georgia and Virginia too. And Masscheuttes still has the law that was the foundation of the 1905 US Supreme Court case on its books too.

If you know of a law like this in your state please let me know so we can continue to collect the information. Our team is researching as fast as we can (and we’d love more volunteers).

Perfect Storm Of Laws And Situation

Of course we need to look at the interaction of other laws with the forced vaccine laws.

Under federal law vaccine manufactures have little or no liability for their products under National Childhood Vaccine Injury Act of 1986 and Public Readiness and Emergency Preparedness Act (commonly called the PREP Act).

So we are looking at a situation where the government may be buying vaccines in large quantities, forcing them on individuals and then the drug companies have no real liability for the damages that happen from the use of the drugs.

For those of us concerned about the law a big issue is the lack of choice.

Add to it that the Coronavirus vaccine is being rushed through testing and production and we potentially have the states forcing a lot of people to get vaccines that have been completely untested with no liability for anyone if the vaccine turns out to be bad for humans.

What To Do Now

If you are concerned about this here are some concrete action steps you can take now:

It will be on YouTube Live — here’s the link (replay available after at the same link, but we want as many people live as possible for interaction and Q&A):

Just as we reported back in March, the war of attrition on our legal rights had truly begun. For it is now the age of the medical police state. Residence of the United Kingdom must also be aware that changes to an already existing law called the Control of Diseases Act 1984, this is actually a  huge change for personal rights and personal choice. Why was it never made public that such rapid erosion of medical freedom was happening?

As already it seems, the British authorities are legally entitled to force vaccinate every British citizen should they choose, otherwise face imprisonment, or ruin. This was written into law at the end of April 2020.

NOTE: Legal issues are discussed generally. This is not legal advice. Consult your own attorney before taking action or refraining from taking any action based on this content.