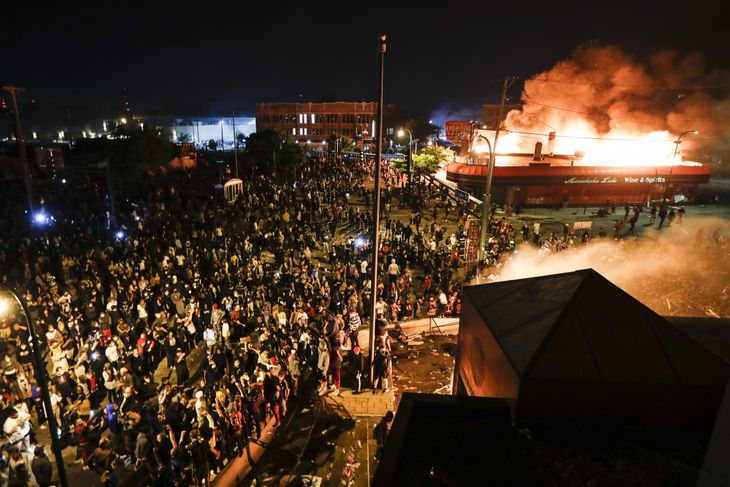 This may seem a strange way to begin a post about a surge in violence in Minneapolis, but Natalie Portman and the rest of Hollywood — you did this.

The Minneapolis Police Department (MPD) told residents they should “be prepared” to hand over their phones, wallets, and purses to robbers.

Police in the city’s Third Precinct alone have received more than 100 reports of robberies and 20 reports of carjackings in just the last month.

Officials are now telling residents to be ready and willing to comply with the demands of criminals in an email sent to Third Precinct residents.

Backing irrational and irresponsible calls — some coming from criminals — to “defund the police” is having very predictable results. Crime is up in many American cities — theft and robberies, violence, murder — with no end in sight. In fact, it’s going to get worse as most cities have not yet actually defunded their police.

What we’re seeing now in most places is just the beginning, with criminals emboldened by the possibility of defunding police.

Wait until the real defunding begins.

Olivia Arnold is just one of the thousands of drivers who had their car stolen this year in Minneapolis.

Her boyfriend was using it to deliver food two weeks ago near 1st Avenue and east 18th Street.

In the 10 seconds he stepped out to hand over the customer’s order a thief jumped into the driver seat and took off.

“You think ‘Oh this is just my side gig doing deliveries.’ You don’t really think anything of it. You don’t think that you’re going to be put in danger because of something like that,” Arnold said.

Being victimized led her to seek more information through social media groups like the Uptown Crime Facebook page.

“That’s kind of where I realized this has been happening a lot lately,” she said.

They’re lucky he wasn’t shot or stabbed. He merely lost his means of making a living during the worst economy in nearly a century. Insurance will pay for that, and perhaps for the therapy he’ll need to treat PTSD.

Minneapolis gave itself over to the radical mob, under pressure from far-left activists, criminals, Hollywood, and the media. Most large cities have done the same, or soon will.

They did this despite the fact that a majority of Americans of all backgrounds never supported defunding police, and defunding would lead to very predictable and terrible results.

Hollywood stars such as Portman and many others, who can afford their own private security, backed defunding calls. It was irresponsible and thoughtless, but so was listening to a word they have to say. Defunding police is condemning the rest of us, without regard to race or background, to this surge in violence.

The Hollywood elites will never repent. They don’t care. They’re shielded from reality living lives in which we pay them to pretend to be someone else. They virtue-signal without real virtue, to make believe they matter beyond the fictional characters they portray, which is putting good people, people better than they are, in real danger.

The defunded police in Minneapolis, left with few options, are telling residents there that you may as well let the criminals have what they want in the hope they decide not to kill you anyway. Basically, you’re on your own. Seattle’s police sent a similar message last week. Shootings are skyrocketing in New York. Chigaco is like Chicago in its worst gangland days now. Unrestrained activists are morphing into mafioso in Kentucky.

In Minneapolis, where the madness started, police are basically giving up. They don’t want to. They just don’t have any choice. Bane runs the city now. But there is no Dark Knight anywhere to rise up and stop him. He’s as fictional as the space queen Portman woodenly portrayed in Star Wars.

Only the violence is real.

“Be prepared to give up your cell phone and purse/wallet,” the police said in their email, a copy of which was obtained by Alpha News. The email said citizens should listen to criminals and “do as they say.”

The message warned that “some victims have been maced, dragged, assaulted, and some threatened with a gun.”

It’s not like the police can help. They won’t have the budget or the city council’s backing, and Hollywood stars and the media will smear them for even trying. So here’s where we are.

If you’re unlucky enough to live in a Democrat state, the law probably doesn’t even back your natural right of self-defense. Defend yourself from a criminal, and odds are a Democrat prosecutor will ruin your life for it.

But we can all rest assured that none of this will ever touch our betters in Hollywood. They’ll be fine behind the walls they tell us don’t work, and surrounded by the armed guards they would deny the rest of us — after disarming the law-abiding, defunding police, and leaving our streets in the hands of maniacs.