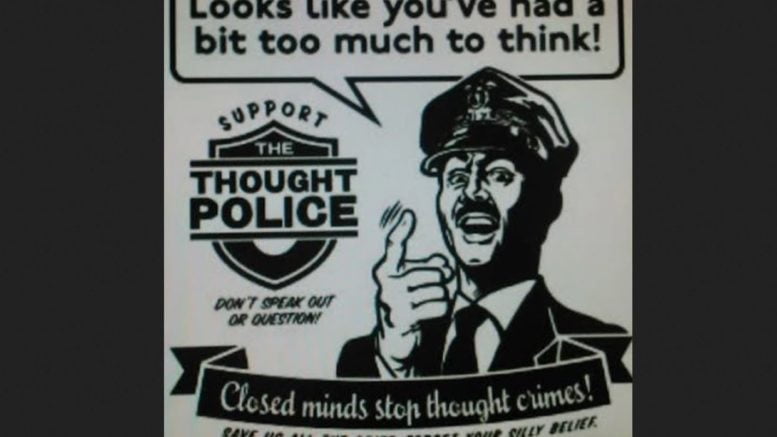 By Dustin Broadbery at ActivistPost.com:

The following quotes are from the Assistant Commissioner of the Metropolitan Police, Neil Basu, published in the Evening Standard on 19th November. I have highlighted some keywords in capitals which I will refer to later in the analysis.

“Met Assistant Commissioner Neil Basu said that there should be a DISCUSSION about whether it is ‘the correct thing for society to allow’ people to spread ‘MISINFORMATION THAT COULD COST PEOPLE’S LIVES’ as he responded to concern that false claims online could undermine the take up of Covid-19 vaccines.”

Do you see what they’re trying to achieve?

This propagandised message from the Met is attempting to reconstruct the ideological landscape, reframe the parameters of what a debate is, reclassify free speech, weaponise information, and obfuscate the important legal principle: ‘Innocent until proven guilty.’

In other words, the government is attempting to whitewash free speech towards the kind of one world ideology that was endemic in the former Soviet Union, where thinking contrary to the ideology of the Communist Party was criminalised.

But there is something even more odious concealed within this Goebbelsian public service announcement: here we have a senior police officer using threatening language to intimidate and shakedown the general population.

This is on the very same day that Boris Johnson flexed his own military muscle, announcing: record defence spending for laser guns, directed energy weapons, an artificial intelligence agency and the creation of a national cyber force (a group of computer hackers to conduct offensive operations).

Offensive operations against who exactly?

Britain is not currently at war, but according to the Assistant Commissioner of the MET, the government is waging an ideological war against anti vaccination conspiracy theorists. Ideological wars of this nature typically take place online, which is where much of the government’s military budget is being invested.

What does that tell us about who the government is at war with?

These strong arm tactics by a fledgling totalitarian regime, learning its trade, could be interpreted as coercion against the British public, and it is likely that the government is not only targeting dissenters, skeptics or those unwilling to wear the uniform of the Red Army, they are in fact threatening the entire population.

We can therefore interpret the stern warning from the Deputy Commissioner of the Metropolitan Police, as follows:

1) DEBATES and DISCUSSIONS are permissible only when it comes to determining the extent of punishment to be served on those publicly voicing concerns or questioning the legitimacy or safety of vaccinations.

2) Despite the fact that a DEBATE and DISCUSSION is being proposed and this DEBATE is apparently open to all (NATIONWIDE), ANTI-VACCINATION CONSPIRACY THEORISTS are not authorised to participate in this discussion. In other words: if your own set of ideologies conflicts with state doctrine, you effectively have no voice. In fact, your voice has already been criminalised, and it is only the extent of your punishment that is so far undetermined.

3) The proposed NATIONWIDE DEBATE is in fact a fiction, when the definition of debate is: ‘a regulated discussion between opposing views.’ What’s more, there can be no debate without FREE SPEECH, which it is implied, does not exist anymore, because the war on MISINFORMATION and the ANTI-VACCINATION CONSPIRACY THEORISTS has established that the principle of free speech is, as a result of the threat of COVID, no longer permissible. As the Met’s Assistant Commissioner points out: one side of the DEBATE has already been silenced and criminalised. Needless to say, the DEBATE does not involve the other side of the DEBATE. This in turn implies that what is being proposed here is in fact a witch hunt and not a DEBATE.

4) An important legal precedent has now been established that overrides the principle of ‘innocent until Proven guilty’ due to the implied guilt of ‘ANTI-VACCINATION CONSPIRACY THEORISTS, without the enactment of legislation. In other words, this witch hunt commenced before the rule of law convened. We can therefore assume that some kind of Kangaroo Court has taken place behind closed doors, without scrutiny or DEBATE from the legislative or judicial branches of government. This in turn implies that the legal process for enacting laws is surpassed by arbitrary policing by preference.

5). Despite the word ‘NATIONWIDE’ implying an open and transparent culture of DEBATE for everyone, as we have already established: the DEBATE will be mediated and directed by a small constituent belonging to one side of the DEBATE. Namely, the executive branch of government (the police), and its public relations agency (the media).

6), The emergency powers which the government granted itself back in March, under the Public Health (Control of Disease Act) 1984 and the Coronavirus Act 2020, not only abolished debates and scrutiny in parliament, these measures dissolved parliament from 650 MPs to 50 MPs. Therefore, if the constitutional affairs of this country cannot be determined by lawmakers in parliament through DEBATE, it is improbable that the general population would be invited into such a DEBATE. Therefore what is implicitly meant by the word DEBATE is official diktat.

7). The notion that MISINFORMATION COULD COST PEOPLE’S LIVES, is one of the most dangerous legal propositions in the history of democracy. Implying the government has decreed a new category of criminal activity, equivalent to thought-crime. Granting the government powers to regulate our thoughts and communications. If it can be argued that a person could be killed by misinformation, then the very principles of ‘intent,’ ‘premeditation’, ‘motive’, and in turn ‘guilt’, are transformed into something else, and each of these parameters of guilt could be preceded by ‘thought’ or ‘word’, as an incitement to cause injury or death. This kind of legal precedent could therefore become an important weapon of censorship, the likes of which has not been attempted previously, and Orwell’s concept of Thought Crime might become a reality in the 21st century. The intervention of Britain’s top anti-terrorist officer in this debate is especially alarming, because it presents evidence that the state is looking to brand anyone questioning the official narrative, with what it deems MISINFORMATION, as a terrorist.

8). All systems of ideological control are concerned with dissolving the power of their opposition. Whether a political party looking to gain more seats in parliament or the Chinese Communist Party (CCP) prohibiting other political parties altogether. The idea that a CONSPIRACY THEORIST presents a threat to people’s lives, grants unprecedented emergency powers to the government to censor, criminalise and prosecute its opposition. Unlike apartheid in South Africa – where a social segment was discriminated against because of the colour of their skin – a conspiracy theorist is not identifiable by any incontrovertible features, and are instead singled out on the basis of the governments interpretation of their dissenting ideological stance. It could therefore be argued that anyone disagreeing with the state, is in fact a CONSPIRACY THEORIST and open to prosecution.

Dustin Broadbery is an anarchist based in London, interested in social theory and particularly how a mutual society could bring about great advancements in the social fabric. Reach him on Twitter: twitter: https://twitter.com/TheCogent1