he general strike occurred in the context of the devastation brought about by the coronavirus pandemic in India.  Added to this are the millions of people who have lost income and who now face increased poverty and hunger, in a country where even before the pandemic 50 percent of all children suffered malnourishment. 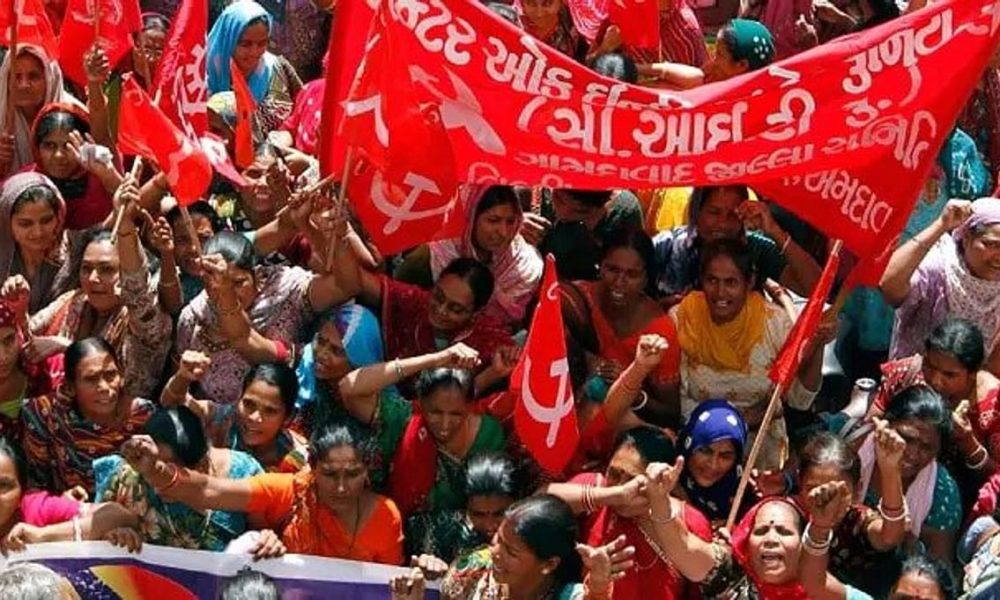 Workers in nearly all of India’s major industries — including steel, coal, telecommunications, engineering, transportation, ports, and banking — joined the strike. Students, domestic workers, taxi drivers, and other sectors also participated in the nationwide day of action.

In addition to the demands of the nationwide strike, certain sectors made industry-specific demands to fight back against the government’s attacks to their industries that affect the entire working class in India. For example, bank employees are fighting against bank privatization, outsourcing, and for a reduction in service charges and action against big corporate defaults.

Other industries framed their demands in the context of the government’s appalling response to the pandemic and economic crisis hitting India. As the Bombay University and College Teachers’ Union’s statement stated:

This strike is against the devastating health and economic crisis unleashed by COVID-19 and the lockdown on the working people of the country. This has been further aggravated by a series of anti-people legislations on agriculture and the labour code enacted by the central government. Along with these measures, the National Education Policy (NEP) imposed on the nation during the pandemic will further cause irreparable harm to the equity of and access to education.

The general strike occurred in the context of the devastation brought about by the coronavirus pandemic in India. India has more than 9.2 million people infected with Covid-19, the second highest count in the world. Since the pandemic began, nearly 135,000 have died, according to official data. It is likely the numbers are much higher. Added to this are the millions of people who have lost income and who now face increased poverty and hunger, in a country where even before the pandemic 50 percent of all children suffered malnourishment.

#WorkersStrike Photos from Haryana where thousands of people marched as part of All India General Strike. pic.twitter.com/hw26PCy7e4

The pandemic has spread from major cities such as Delhi, Mumbai, and other urban centers to rural areas where public health care is scarce or non-existent. The Modi government has handled the pandemic by prioritizing the profits of big business and protecting the fortunes of billionaires over protecting the lives and livelihoods of workers.

To stand up against these attacks — many of which began even before the pandemic — farmers and rural workers have been protesting for several months. They joined the national strike this week, staging actions across the country. Small farmers from three major agriculture-based states in India marched all the way to Delhi to protest laws passed by Modi’s government that would allow for larger corporate freedom and industrial farming. They were met with tear gas and brutal repression by the police upon entering Delhi.

The nationalist and right-wing government has used the pandemic to intensify its persecution of Muslims and migrant workers. In New Delhi in April, migrant workers returning home after being stranded by the nation-wide lockdown were brutally hosed down with bleach used to disinfect buses.

Modi has also escalated his nationalist rhetoric, especially against China, in an effort to capitalize on the trade war between the U.S. and China and deepen its strategic and military cooperation with the United States.

In the midst of the misery created by decades of neoliberalism and exacerbated by the pandemic, union leaders called the strike to allow workers to express discontent against the government. This one day strike demonstrated the anger of the working class and unity of farmers, workers and students. However, a one day general strike is not enough to impose all of the ambitious demands put forward by workers and farmers. The working class of India must fight to expand the strike, against the Stalinist-led union leaders of the Centre of Indian Trade Unions (CITU) and the All-India Trade Union Congress (AITUC), who try to reign in the anger of the working class with merely symbolic demonstrations.

Without a doubt, this massive coordinated action shows the great potential for unity in action of the Indian working class and farmers. It serves as an inspiration for workers all over the world to use one of our greatest tools against the capitalists: the strike.