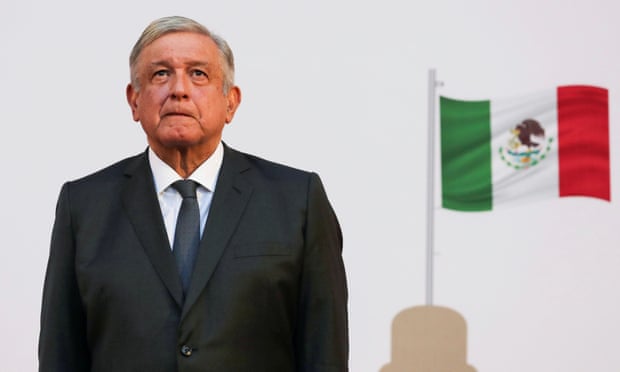 ‘The fundamental thing is to guarantee liberty,’ says Mexican president when asked why he almost never wears a mask

Mexico’s president, Andrés Manuel López Obrador: ‘Everyone is free. Whoever wants to wear a face mask and feel safer is welcome to do so.’ Photograph: Henry Romero/Reuters

Mexicos’s President Andrés Manuel López Obrador suggested on Wednesday that politicians who impose lockdowns or curfews to limit Covid-19 are acting like dictators.

The comments came as López Obrador once again fended off questions about why he almost never wears a face mask, saying it was a question of liberty.

The Mexican leader said pandemic measures that limit people’s movements are “fashionable among authorities … who want to show they are heavy-handed, dictatorship.

“A lot of them are letting their authoritarian instincts show,” he said, adding “the fundamental thing is to guarantee liberty.”

López Obrador’s comments came a day after the head of the World Health Organization (WHO) said that Mexico was “in bad shape” with the pandemic and urged its leaders to take the coronavirus seriously.

“The number of increasing cases and deaths in Mexico is very worrisome,” said the WHO director general, Tedros Adhanom Ghebreyesus, on Monday.

In his comments on Wednesday, it was unclear if the Mexican leader was referring to authorities in other countries, or the mainly opposition-party local leaders in Mexico.

Many governments across the world have effectively implemented lockdowns or limits on when people can leave their homes, something López Obrador has fiercely resisted doing, arguing some people live day-to-day on what they earn on the streets.

Some local governments in Mexico have tried to use police to enforce limits on masks or movement, which resulted in scandals of abusive behavior by police.

López Obrador argues such measures should be voluntary.

“Everyone is free. Whoever wants to wear a face mask and feel safer is welcome to do so,” López Obrador said.

The Mexican government has gone against the grain of international anti-virus practices in two ways. It has offered changing and contradictory advice on the utility of wearing face masks, and has described mass testing as wasteful and pointless.

Mexico has seen almost 107,000 test-confirmed deaths so far, the fourth-highest toll in the world, but Mexico does relatively little testing and officials estimate the real death toll is closer to 150,000.