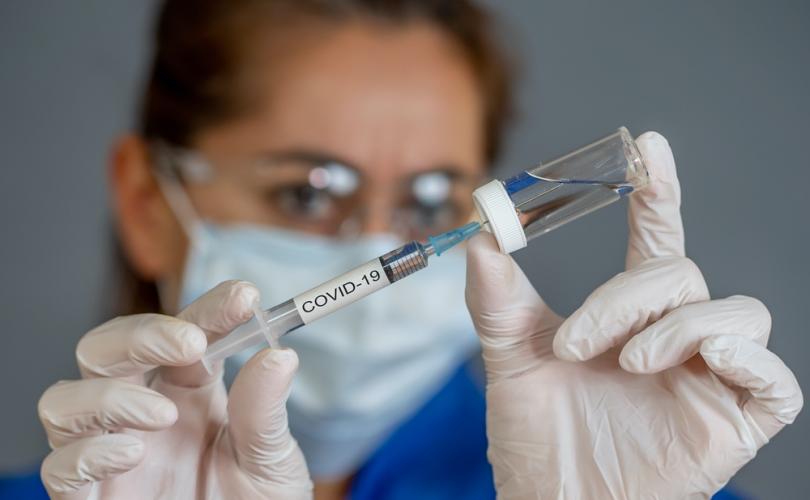 The vaccine uses the ‘aborted fetal cell line HEK-293′ in the ‘fundamental design of mRNA technology, their Spike protein and in the research, development, production and testing.’

Fr. John Fields was the Communications and Religious Education Director for the Archeparchy of Philadelphia, which is part of the Ukrainian Greek-Catholic Church. Announcing his death, the Archeparchy stated that Fr. Fields “has passed away in his home. The cause of death is yet to be determined.” Fr. Fields turned 70 this year.

Just recently, Fields had participated in the trials of Moderna’s COVID-19 vaccine, after receiving an email from the University of Pennsylvania at the end of August, asking if he wished to “participate in the third and final phase” of the vaccine trial.

The Dialog reports that Fr. Fields had been very eager to participate in the trials, answering “yes” to the email: “It would be a great opportunity to fight this pesky virus that suddenly appeared and wreaked havoc throughout the world, bringing death and disrupting every aspect of our lives.”

He had been approached specifically due to his age, since he was in the age bracket the study team “deemed the higher risk group for the COVID-19 virus.” The first injection he received was on August 31, with the second on October 1.

Despite being asked to record any symptoms following the vaccination, Fr. Fields previously confirmed to The Dialog that he experienced none.

“I think of the researchers, who in only several months, as part of Operation Warp Speed, collectively used their knowledge and wisdom from Almighty God to achieve this medical milestone,” he had said. “I may be able [to] contribute in some small way to the development of an effective vaccine that would help stop this worldwide COVID-19 pandemic and the fear.”

Father Michael Hutsko, of Sts. Peter and Paul church in Mount Carmel, Pennsylvania, suggested that Fr. Fields had suffered “an apparent heart attack,” and the vicar general of the Archeparchy confirmed that Fr. Fields “did not have COVID-19.”

Archbishop Boris Gudziak of the Archeparchy said, “In our last conversation before Thanksgiving Father John was in good spirits and seemingly improving in his health.”

Vaccine manufacturer Moderna has promoted the safety and effectiveness of the vaccine, but pro-life organization Children of God for Life reported in May that there was a “20% ‘serious’ injury rate” amongst those who had received a high dosage of the vaccine in early trials. The participants in the vaccine trial at that stage were also very selectively chosen, as Moderna “allowed only exceptionally healthy volunteers to participate in the study.”

Members of an Advisory Committee on Immunization Practices (ACIP) have been warning the U.S. Centers for Disease Control and Prevention (CDC) that the public should be warned about the potential serious side effects from vaccines.

While Fr. Fields volunteered for the testing of the vaccine in its third stage trial phase, the Moderna vaccine does in fact use cells from aborted babies in its formulation.

Children of God for Life compiled research to show that Moderna “extensively” uses the “aborted fetal cell line HEK-293” in the “fundamental design of mRNA technology, their Spike protein and in the research, development, production and testing.”

The Spike protein and the mRNA used in the Moderna vaccine “were built on technology that extensively used aborted fetal cells, rendering the vaccine absolutely immoral from start to finish.”

Children of God for Life had already reported on the unethical nature of the Moderna vaccine back in March.

Certain members of the clergy have also been speaking out regarding the moral nature of such a vaccine and whether a Catholic might use it. Fr. Robert Altier, a priest in the Catholic Archdiocese of Saint Paul and Minneapolis, recently delivered a homily in which, amongst other issues, he slated the Moderna vaccine by name.

He described Moderna’s vaccine as “heinous” because it “is designed to change the RNA in your body so that every cell in your body then has been changed to be able to fight the coronavirus. Not your immune system anymore – the very cells in your body will be changed. This is evil.”

Bishop Brennan of Fresno, California, issued a video message to the faithful in his diocese, in which he reaffirmed the immorality of all vaccines, including COVID vaccines, that at any stage of production have any involvement with aborted babies.

Brennan stated, “If material has been used that is unacceptable on a moral level in any stage of the process for the development of a vaccine, that is from design … the testing … the production … any stage, anything in between, if it’s using objectionable material, we can’t use it, we can’t avail ourselves of it.”

Bishop Strickland of Tyler, Texas, also warned people via Twitter against the Moderna vaccine, saying that it is not “morally produced.”

“Moderna vaccine is not morally produced. Unborn children died in abortions and then their bodies were used as ‘laboratory specimens’. I urge all who believe in the sanctity of life to reject a vaccine which has been produced immorally,” he said.