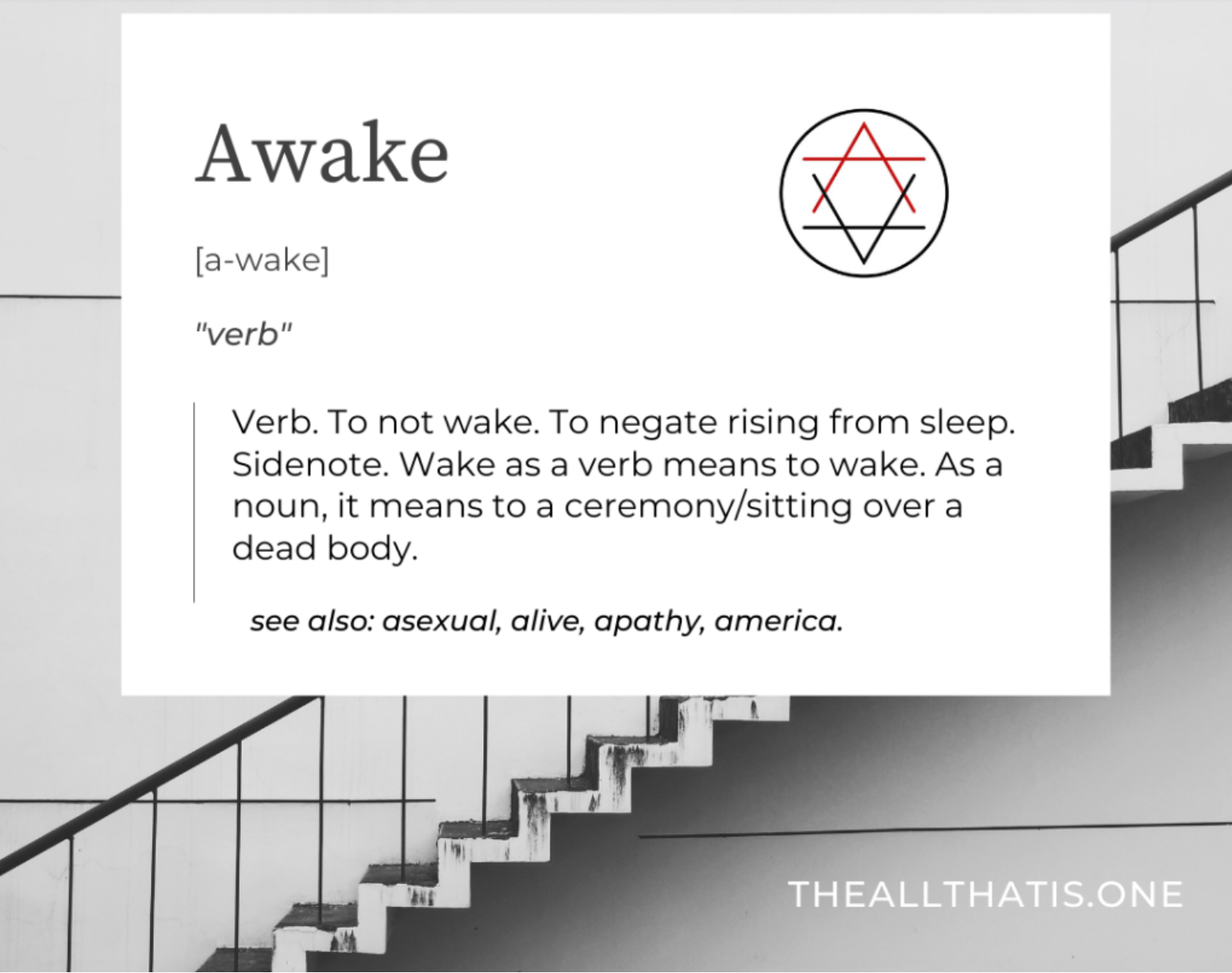 Article by Paul from TheAllThatIs.One;

I feel it is an apt moment to write a follow up of the (ar)ticle Re-education of the Word I published in 2018. For those who have yet to read this piece the link is (em)bedded in the title. As a brief (re)minder (a)bout the post, i (pre)sented the power and (im)portance of language. I give many (ex)amples of this. On a couple of (oc)casions, I mentioned the concept of a linguistic prison. That we were somehow liberated or (im)prisoned by our use of language. I wrote the (ar)ticle in October 2018 whilst I was living in Cornwall and (dis)covering the great teacher of Syncretism, Santos Bonacci

By the summer of 2019, my (in)tuitive nose followed a thread by Santos to some videos about Quantum Parse Syntax Grammar which lead me to watching :David-Wynn: Miller, who was giving a (pre)sentation (a)bout a mathematically (a)ligned “perfect” grammar language he had created. He states at the (be)ginning of the (pre)sentaion that he (dis)covered that 90% of the (En)glish language and just (a)bout all known languages on Earth, had been (en)gineered to mean nothing. He realized, (a)mong other grammatical (er)rors, our modern language has had (pre)fixes and suffixes (ad)ded to the root meanings of words, which modifies them, known as colouring.

(U)pon these (re)velations, David and his business partner, (an-o)ther student of language and grammar :Russell-Jay: Gould, found a way to write a sentence, using (pre)positional phrases in a (pre)sent tense scenario, bringing themselves into a different jurisdiction to the pantomime past and future tense grammar of our current legal system. It is (in)teresting to me, that this language, (a)ligns with the spiritual principle of the (pre)sent, now space.

To give further context to the reader I will (as)similate a little what I have (al)ready shared and why.

When David (ex)plained, what i am highlighting in brackets, a lot of things began making sense. As you can see, i am bracketing the (pre)fixes. These (pre)fixes, when you look at their meaning in a dictionary, you will see, that all these (pre)fixes are either (ne)gating the root word or a movement away from, towards, (be)fore and (af)ter, bring the meaning out of the now-space. In styles, when words are bracketed, they are (re)moved from the page in meaning.

I feel, to know and comprehend what these (pre)fixes are, has the potential to unravel, (pre)viously blocked (as)pects of our cognitive capacity and (a)bility to manifest. Currently, using this (in)verted script, we are, in (es)sence, losing our creative power through confusion of meaning. The concept of cognitive (dis)sonance is something that points to this type of mental confusion. A condition where the (sub)conscious mind is (i)gnored by the conscious mind, that thinks its knows its right and that it sees (e)verything, the way it is. Which is true. We only see through the filtered perception of our mind and its (be)liefs. Yet the (sub)conscious mind is an unfiltered (in)dividualised (as)pect of the superconscious mind, that is being overridden by our conscious mind.

To know that the language has been modified, is enough to what to (re)claim our conscious sovereignty and (em)powerment. Just look at all these bracketed words, like (em)powerment, that without the bracket, means no-powerment.

Look at the global situations (re)garding mandatory mask wearing and potential vaccines. Each and (e)very private company and trader is being forced through (in)surance to comply with these new heath and safety (re)strictions. What is an (in)surance policy when (in)surance means no-surance? What is a no-surance policy?

Here is a (de)finition of in- as a (pre)fix, to clarify this is not my (o)pinion, from the Cambridge online dictionary.

used to add the meaning “not,” “lacking,” or “the opposite of” to adjectives and to words formed from adjectives:

These are genuine questions we can start asking ourselves and our law makers, governments and (in)stitutions. What do they mean by… (In)surance, (In)dependence and (in)stitution? I (en)courage everyone to (be)gin their own (en)quiry as to the meaning and roots of the words we use.. known as (e)tymology.

When this World age is seemingly crumbling (be)fore our eyes, what are we going to do (a)bout it? Act confused? Roll over and comply? Or are we going to start holding these fraudulent (in)stitutions to their words and actions. These no-surance companies are (en)forcing these (re)strictions (a)gainst our human rites and closing down all other viable options. People are told they are not (al)lowed to go into shops without being forced to comply with wearing a mask. Something which, through research, suggests is a global ritual of black magic and potentially far more damaging to our health than this “seasonal flu” as quoted by the (pre)sident of the World Doctors (As)sociation Dr. Dolores Cahill. There is a wealth of (e)vidence by top doctors and (pro)fessors that this pandemic has been falsified and sensationalized to create global (o)benience and (de)stroy (in-de)pendent businesses from trading.

So, if we are to highlight the problem, we must (pre)sent the solution. In the case of laanguage at least, by learning to write in (pre)positional phrases. Currently our (a)bility to write a correct statement or fact is (im)peding us from creating positive contracts of our vessels. By learning about parse and syntax, we can start to state facts and (af)firmations that are written with true meaning and closure and stop & correct fraudulent conveyance of language.

David & Russell (dis)covered that the grammatical structure, that we have all been taught, in fact, creates no closure for the reader or volition of the author. Through learning correct syntaxing, they realized that our current sentence structure fails to state a fact.

Taught to us as (pre)position, (ar)ticle, noun (no-no), now known in the community as a Poisiton, lodial, fact. When we write babble (En)glish, we fail to state a fact(noun). Through the modification of the sentence structure. (ad)verbs (non-tangible words) and particularly (ad)jectives modify (colours) the following words. A modification of a fact is not a fact. Our (ad)verbs, verb,(ad)jectives & (pronoun) as we use them today, modify the meaning and sentence structure which often leaves the reader with no true closure, (es)especially in (re)lation to a statement of a fact.

Take The (U)nited States Of (A)mercia. The is an (ad)verb, (U)nited is a (ad)jetive, States is a (pro)noun, Of being an (ad)verb making (A)merica a verb. Is a country a verb? A country is a Noun, yet the sentence structure, without the use of a lodial (the) creates a dangling passable verb.

The correct way to write it is.. For the (U)nited-States of the (A)merica. Syntax was (re)moved from the (e)ducation systems back in the 60s (a)long side parse and latin. Likely, so they we would not ever know the conscious tricks they were playing on us.

For the bridge is over the water

For the water is (un)der the bridge

Reading and writing these sentences can seem jarring at first, yet they follow a very basic structure. We start with..

by the claimant :Russell-Jay:

For the claimant :Russell-Jay:

is with the facts

In total there is, for the, of the, is/are with the, by the, as ways in which to build correctly structured claims that (in)clude a cause, a fact, verb of the thinking (is/are), a possessive/claim and authentication.

This (in)formation, when (re)gonized the (im)plications, can bring a halt to the fraudulent systems that currently have no legal standing when challenged on their (de)finition of language & meaning. Every single contract that has been written using poisoned (pre)fixes and (in)correct use of grammar is null and void. When a contract has found to convey false language, it is terminated.

I (in)vite you to check the language used in your (in)surance claims & contracts as well as your banks and national tax service. Im not suggesting, to not pay them, yet to seek clarification of word terms before any future contracting is made. A vital part of joining this community is creating a Claim of the Life. An (in)dividual claim (with joint witnesses) of live life, in which to begin the process of becoming your own post-master of yourself/vessel. We then use this claim to come into usery with our other documents like passports, drivers licences etc. To know more about the Claim of the Life click the link.. where you will find access to Russell’s authorized website. https://theallthatis.one/claim-of-the-life/

We need clarity moving forward if we are to build trust and (ac)countability that we are saying what we mean and mean what we are saying. (af)firmations (be)come (in)finitely more powerful when they are created in a structure that follows a mathematically pure formula. It can be read frontwards and backwards with the same meaning. That sounds pretty perfect to me.

This latest piece of the puzzle, in (re)lation to language, is a fascinating (dis)covery and one that (in)spires me to share it with (o)thers who may feel as surprised as i felt. So much so, that i have (re)written a book of poems and riddles to (in)clude this knowledge. (Pre)sented in brackets like this, to (re)mind us of what we have not known was there to see. There are also (o)ther writings on this blog that further (re)veal facets of this global enslavement system in (re)lation to language, the journeys of David & Russell and the construct they built.

There are still many questions about how the masses will ever cross over to this Quantum Language, seeing its difficulty to comprehend the multitude layers of shipping, postal and law mechanics on top of mastering the language.. One thing is sure, that the modification, of most likely, all known modern and recent past languages, have been purposefully (en)gineered to modify the meaning and likely (in)tention of the root word. It is not for me to get into the who’s and when’s, to know why is of (im)portance, as it may well unlock many keys in the minds of those who have yet to see the (in)tent of those who seeked and still seek our (mis-e)ducation & dispowerment.

This (ar)ticle has been written to (en)courage a deeper (en)quiry into the spelling of the languages and (in)vite those who have knowledge, to reach out, to help spread the word.