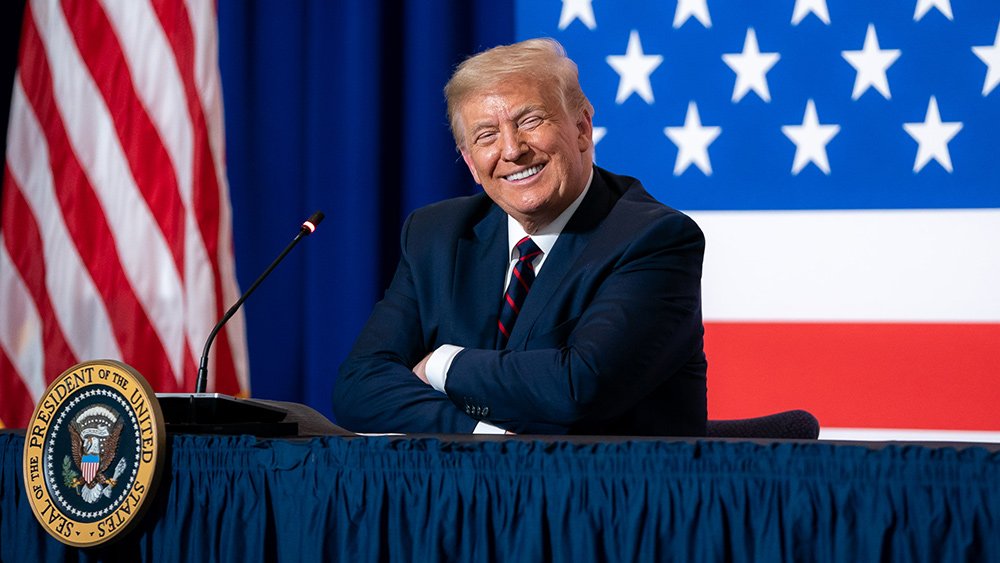 In an email blast sent out to his supporters on Monday, former President Donald Trump bashed those who are just saying no to the experimental Wuhan coronavirus (Covid-19) gene therapy injections being administered under his “Operation Warp Speed” mass vaccination scheme.

According to Trump, there is no reason for anyone to skip the jab because “every medication” carries with it “some risk.” Taking a precautionary approach, even for an alleged virus that almost nobody develops symptoms from, is “deranged pseudo-science,” according to Trump.

“The federal pause on the J&J shot makes no sense,” Trump complained. “Why is the Biden White House letting insanely risk-averse bureaucrats run the show?

Trump is referring, of course, to the federal government’s temporary halt on all further administration of Johnson & Johnson’s Chinese Virus injection, which just like every other emergency use authorization (EUA) jab currently being administered is linked to deadly blood clots.

In Trump’s view, most people are not experiencing these blood clots immediately after injection so there is no reason to stop the highly profitable, zero-liability operation from proceeding.

“Just six people out of the nearly 7 million who’ve gotten the Johnson & Johnson vaccine reported blood clots,” Trump further whined. “The condition is more common in the general population, and every vaccine – indeed, every medication – carries some risk, including the Moderna and Pfizer jabs.”

Today, I got the shot!!! I hope that you do too!
Thank you Nurse Torres!!! 💙 pic.twitter.com/gPL1Mecv1G

Despite several years back while running for president in 2016 expressing his own “anti-vaccine” sentiments, Trump has now decided to take aim at those “resisting” the latest experimental injections from Big Pharma, which are not even approved by the U.S. Food and Drug Administration (FDA).

Trump says that it is “sheer lunacy” for Resident Joe Biden “to delay millions of vaccinations and feed fears among the vax-resistant.”

“Indeed, this moronic move is a gift to the anti-vax movement,” Trump added in the email. “The science bureaucrats are fueling that deranged pseudo-science.”

You can read the full press release below as tweeted by the Right Side Broadcasting Network (RSBN):

Trump was the catalyst for the “new normal”

Many seem to have forgotten that it was Trump who declared a “national emergency” with regards to the Wuhan coronavirus (Covid-19) back on March 13, 2020. This opened up the door for nationwide lockdowns, mask mandates and other authoritarian impositions.

Not long after his declaration, Trump announced the launch of Operation Warp Speed, which promised a “fast-tracked” vaccine scheme to be rolled out at “warp speed.”

Now, thanks to Trump, Americans are being coerced into getting jabbed as a condition of returning back to “normal.” Governments around the world, including here in the United States, are also now talking about forcing people to carry around “vaccine passports” to prove they were injected as a condition of entry into stores.

Colleges and universities all across the country are already announcing that in order for students to return to on-campus learning this fall, they will need to get injected with one of Trump’s rushed-to-market Wuhan flu shots.

“Trump went along with the scam giving the criminals everything they wanted by signing off on trillion-dollar sellouts and strengthening the corrupt medical industrial establishments, allowing criminal politicians to destroy America and the world,” wrote one discouraged commenter at Big League Politics about the downfall of Trump, who appears to be in a delusional state of mind.

“Now, he stupidly doubles down on his heinous crimes by belligerently feigning innocence and selling the toxic crap they call a Covid-19 vaccine. The dude actually thinks he has a chance to be president again.”

More related news stories about the fallout from Trump’s Operation Warp Speed debacle can be found at Pandemic.news.