If I was a member of the group of would-be God-Kings of Planet Earth in Davos right now I would be scared, very scared.  That is because their long and meticulously planned use of a manufactured pandemic to start a Totalitarian World Government is imploding.  Instead, they are about to face a War Crimes Tribunal that will make Nuremberg look like a kindergarten slap on the wrist.

These people have been trying very hard to kill a majority of the world’s population for decades now and have already killed far more people than Adolf Hitler ever did.  They have now lost control of most of the world’s military power.  This can be seen by the fact the people running the Joe Biden avatar “government” were denied entry into the Pentagon and now plan to run to NATO headquarters to seek protection.  Protection that NATO cannot provide because nobody is willing to use nuclear weapons on their behalf, Pentagon, Russian FSB, French and British military sources say. https://thecommonsenseshow.com/agenda-21-conspiracy-economics/several-world-leaders-including-putin-and-netanyahu-want-biden-gone-and-trump-appears-be-part-plot

They are also losing their grip on the global media and financial control grid.  So, when the sleepwalking portion of the public wakes up to the cabal’s horrific crimes, they won’t be in a forgiving mood.

Here from a 1981 book by Bilderberger Jacques Attalli is an example of their mindset:

“The future will be about finding a way to reduce the population…Of course, we will not be able to execute people or build camps.  We get rid of them by making them believe it is for their own good…We will find or cause something, a pandemic targeting certain people, a real economic crisis or not, a virus affecting the old or the elderly, it doesn’t matter, the weak and the fearful will succumb to it.  The stupid will believe in it and ask to be treated.  We will have taken care of having panned the treatment, a treatment that will be the solution.  The selection of idiots will therefore be done by itself: they will go to the slaughterhouse alone.”

Now we have a news anchor confirming this plan with a Freudian slip where he says “almost four months into the vaccination effort providers are beginning to run out of people who want to be euthanized.” http://82.221.129.208/euthanized.mp4

It appears the “dumb people,” have already self-selected. http://www.madnesshub.com/2021/04/us-vaccination-sites-are-closing-from.html

People who still follow orders and believe in the system are also suffering from cognitive dissonance as the contradictions in the official “pandemic” story begin to pile up.  Here you can watch my sister, Martha Fulford, an expert on contagious diseases, telling mainstream Canadian TV that lockdowns make no sense because the areas with the toughest lockdowns also have the highest number of new cases. https://globalnews.ca/video/7748177/medical-expert-sound-alarm-over-collateral-damage-of-lockdowns

The holes in the official story mean the red pill is just beginning to take effect on her and countless of her colleagues around the world.  Soon they will all realize there are more “pandemic” cases in regions that locked down because that is where the authorities more actively participated in creating the scamdemic in the first place. https://www.sgtreport.com/2021/04/covid-cases-are-growing-the-most-in-locked-down-states/

As examples of this government connivance here we have images showing the book “Covid-19 and the great reset,” on the bookshelves of the Prime Ministers of Greece and Australia. https://www.rumormillnews.com/cgi-bin/forum.cgi?read=170674

To underscore this, Japanese military intelligence sent us…

screenshots of freedom of information requests sent to governments around the world asking for proof the “new virus” exists and answers saying no government or agency has such proof. 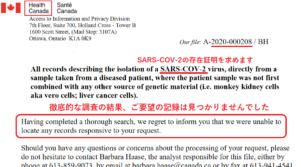 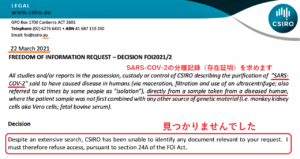 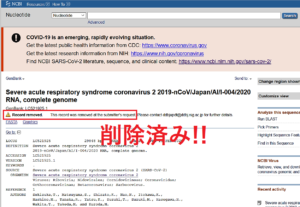 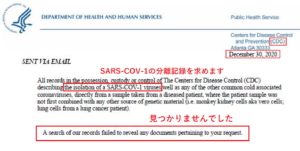 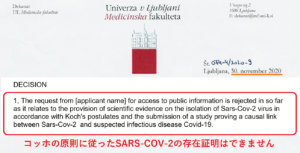 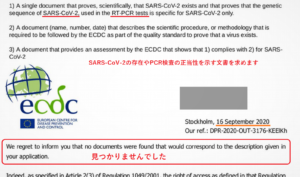 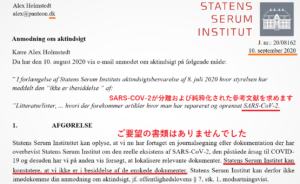 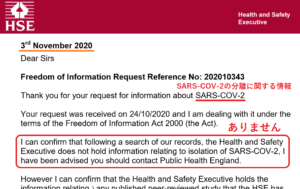 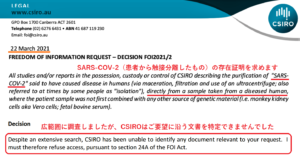 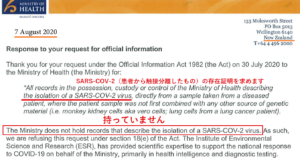 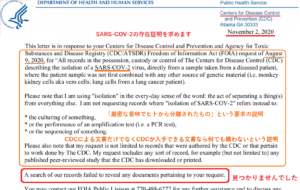 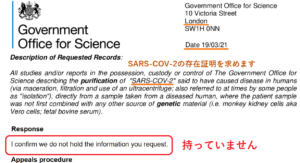 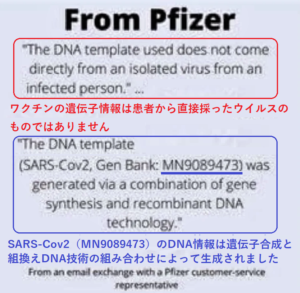 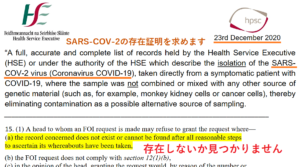 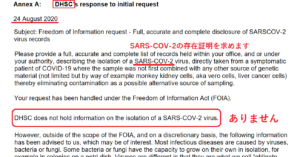 We shouldn’t be surprised then to see “Covid-19” tests that have predetermined negative and positive results. 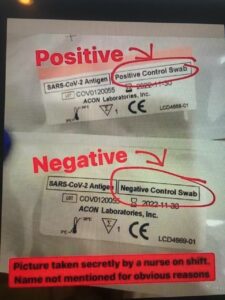 There is also a plethora of information coming out about all the nasty things that are happening to people who got vaccinated.  Here is a small montage from various reports:

“The vaccines cause blood clots, mad cow disease, infertility, herpes, etc. reports indicate damage to almost every system in the human body.…Our analysis found a relatively high rate of heart-related injuries, 26% of all cardiac events occurred in young people up to the age of 40, with the most common diagnosis in these cases being Myositis or Pericarditis.

Also, a high rate of massive vaginal bleeding, neurological damage, and damage to the skeletal and skin systems has been observed… this will be used for massive-scale depopulation…India’s Public Health Ambassador Dies Day After Taking COVID Vaccine…women reporting the sudden onset of menstrual irregularities and miscarriages (up 400x according to some health providers) since the v started…”

What all of this means is that the Davos Octagon crowed failed to reach the critical mass needed to cement their rule via a mass culling of the population, vaccine passports, and total human enslavement.

Attempts to foment civil war and martial law in the U.S. are also failing.  We note the George Floyd psy-ops was wound down with a “guilty verdict,” for the policeman who supposedly killed him.  This did not stop provocateurs, many of them brought in from Eastern Europe, from trying to start race riots anyway.  They have also started more shootings of innocent black people to try to keep fanning the flames of unrest.  However, they are not succeeding.

Attempts to start a war with Russia/Iran/North Korea etc. are also failing big time.  In the latest twist, it turns out “Dutch parliamentarians, like their British and Baltic colleagues, had a conversation via Zoom with a deep fake imitation of the chief of staff of the Russian opposition leader Alexei Navalny on Wednesday.”  It seems they are resorting to CG because they can’t even find real Russian opposition to fan the flames of war. https://nltimes.nl/2021/04/24/dutch-mps-video-conference-deep-fake-imitation-navalnys-chief-staff

Meanwhile, if you monitor the corporate propaganda media, you can see that day-by-day they are piling on UFO stories at an unprecedented rate.  This is a clear sign the cabal is trying to dig out of their pandemic hole with space alien fears. https://www.vice.com/en/article/z3xewj/air-canada-westjet-porter-pilots-ufo-sightings

And now just on cue, we are getting videos of the aliens themselves.

Speaking about space aliens NASA (Not A Space Agency) is putting out ever more ridiculous press releases.  They have been filming ever more mars stuff, apparently on Devon Island in the Arctic, and are even throwing in “mars helicopters.” https://odysee.com/@ConspiracyReality:3/00089—Mars-Perseverance-Rover-Landing-Debunked:2

Now they put out a press release saying that for just $2.89 billion or about one hundredth the cost of the original moon landings, they will send “the first woman” and the “first person of color” to the moon.  I suppose they can do it cheaply now because they do not need to build expensive film sets, computer graphics will do the trick.  It is a good guess the budget will be $2.88 billion to line the pockets of NASA scammers and $0.01 billion to sub-contract out the CGs to some computer game slave farm. https://www.nasa.gov/press-release/as-artemis-moves-forward-nasa-picks-spacex-to-land-next-americans-on-moon

In a similar vein, can anybody identify the circle with a hole in the middle in the sky next to the erupting volcano in Japan? Is that some sort of CG artifact or what? https://www.youtube.com/watch?v=RGnIuXPup64&t=81s

Speaking about fantasy and computer games, this chart alone tells you the U.S. stock market is now just a mass hallucination with no link to reality. https://cms.zerohedge.com/s3/files/inline-images/U.S.-margin-debt-YOY-2021-04-17.png?itok=s-3h6fpI 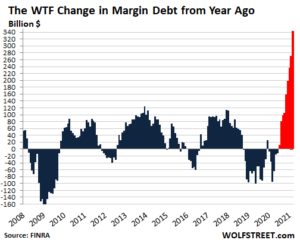 The U.S. economy itself is also losing touch with reality, as more and more free money is pumped to the masses in a desperate attempt to stop them from rising up with pitchforks.  Of course, all that free money means people have no incentive to do real work which is why a McDonalds in the U.S. has been forced to pay people $50 just to come to a job interview. https://www.zerohedge.com/markets/whatever-it-takes-tampa-mcdonalds-exposes-americas-systemic-labor-shortage-forced-pay

What all of this means the U.S. Corporate government is in its death throes.  Even Corporate propaganda media are now saying Washington DC is going to become just another U.S. state. https://www.cbsnews.com/news/dc-statehood-bill-pases-house/

In fact, we have now received confirmation from a senior European royal that the end of the U.S. corporation is just one symptom of the end of Rothschild rule over the West.

Here is what the source said:

“The sole Sovereign ownership of BIS Basel and all the world’s banks have been transferred back into sovereign control and command.  The Rothschilds are gone.  MI6 managed to regain control.  The great reset is being replaced with the great coming together.”

When we asked if a White Dragon Society envoy should go to Davos to discuss a transfer of power to humanity, the source said:

Also as the secret war winds down the source said:

“We have to honor all of the Secret Service who died, many of whom will never be known.  Some of our officers were exposed to horrific conditions.  They all lost their lives and nobody knows.”

Hopefully, the new generation of leadership in the West will end all the craziness and start talking common sense.  Speaking about common sense, here is what Chinese leadership avatar Xi Jinping had to say last week:

“Global governance should reflect the evolving political and economic landscape in the world, conform to the historical trend of peace, development and win-win cooperation, and meet the practical needs in addressing global challenges.” http://www.xinhuanet.com/english/2021-04/20/c_139893671.htm

This is not as exciting as “the Russians are coming” or “Iran is about to nuke us” or “Those crazy North Koreans set off another missile,” or “space invaders have come” etc. but it’s definitely a lot more common sense.  That is what the world needs right now.

Hopefully, negotiations in Switzerland due to take place in late May will finally lead to announcements of a change for the better in how we run this beautiful but fragile planet we all share.  Until then though, we must keep fighting.