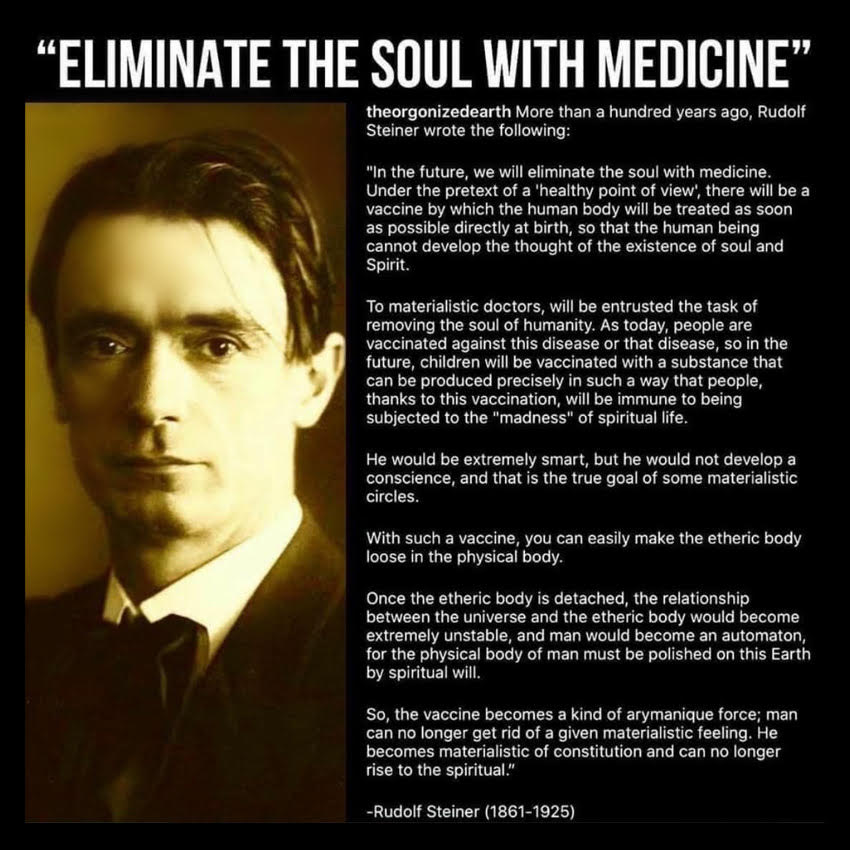 “It’s amazingly significant how clear Steiner’s perception of the larger picture was and still is, when we read his description of the time we’re now living in 104 years later.
Here’s, from Rudolf Steiner,’s lecture 13 “The Fallen Spirits’ Influence in the World. Dornach, 27 October 1917:
“It will be the main concern of these spirits of darkness to bring confusion into the rightful elements which are now spreading on earth and need to spread in such a way that the spirits of light can continue to be active in them. They will seek to push these in the wrong direction. I have already spoken of one such wrong direction, which is about as paradoxical as is possible. [ Note 1 ]
I have pointed out that while human bodies will develop in such a way that certain spiritualities can find room in them, the materialistic bent, which will spread more and more under the guidance of the spirits of darkness, will work against this and combat it by physical means.
I have told you that the spirits of darkness are going to inspire their human hosts, in whom they will be dwelling, to find a vaccine that will drive all inclination towards spirituality out of people’s souls when they are still very young, and this will happen in a roundabout way through the living body. Today, bodies are vaccinated against one thing and another; in future, children will be vaccinated with a substance which it will certainly be possible to produce, and this will make them immune so that they do not develop foolish inclinations connected with spiritual life — ‘foolish’ here, of course, in the eyes of materialists.
A beginning has already been made, though only in the literary field where it is less harmful. As I have mentioned, [ Note 2 ] learned medical experts have published books on the abnormalities of certain men of genius. As you know, attempts have been made to understand the genius of Conrad Ferdinand Meyer, Viktor Scheffel, Nietzsche, Schopenhauer and Goethe, by showing them to suffer from certain abnormalities. And the most astounding thing in this field is that people have also sought to understand Jesus Christ and the Gospels from this point of view. Two publications are now in existence in which the origins of Christianity are said to be due to the fact that at the beginning of our era there lived an individual who was mentally and psychologically abnormal; this individual went about in Palestine as Jesus Christ and infected people with Christianity.
These, as I said, are the beginnings in the field of literature. The whole trend goes in a direction where a way will finally be found to vaccinate bodies so that these bodies will not allow the inclination towards spiritual ideas to develop and all their lives people will believe only in the physical world they perceive with the senses. Out of impulses which the medical profession gained from presumption — oh, I beg your pardon, from the consumption they themselves suffered — people are now vaccinated against consumption, and in the same way they will be vaccinated against any inclination towards spirituality.
This is merely to give you a particularly striking example of many things which will come in the near and more distant future in this field — the aim being to bring confusion into the impulses which want to stream down to earth after the victory of the spirits of light. The first step must be to throw people’s views into confusion, turning their concepts and ideas inside out. This is a serious thing and must be watched with care, for it is part of some highly important elements which will be the background to events now in preparation”.

Lecture 13 The Fallen Spirits Influence in the world: https://www.rsarchive.org/Lectures/GA177/English/RSP1993/19171027p01.html
All 14 lectures are here:
https://www.rsarchive.org/Lectures/GA177/English/RSP1993/FalDar_index.html
In these 14 lectures, given at the end of 1917 following four years of war in Europe, Steiner speaks on the complex spiritual forces behind the Great War, humanity’s attempts to build theoretically perfect social orders, and the many divisions and disruptions that would continue to occur on earth in our time. Humanity in general was asleep to the fact that fallen spirits, cast out of the spiritual worlds, had become intensely active on earth. This manifested particularly in people’s thinking and in their perception of the world about them. But the defeat and fall of these spirits also ensured that a science of the spirit would always be available to humanity.

These lectures given at Dornach, Switzerland in September and October of 1917, are from the lecture series entitled: The Spiritual Background of the External World … In the Complete Edition of the works of Rudolf Steiner the original German text is published with the title: Die Spirituellen Hintergruende der Aeusseren Welt. Der Sturz der Geister der Finsternis. Geistige Wesen und ihre Wirkungen. (No. 177 in the Bibliographic Survey, 1961).

A most significant part of lecture 12 is what follows. I personally believe that we should take this at heart, in order to be present in the reality of perceiving the larger picture, and that all forced play their role:

“We must have a feeling for life on the upward and life on the downward trend. Do not fall prey to the foolish inclination to escape from the downward trend, saying, ‘I will have nothing to do with Lucifer, nor with Ahriman.’ I have often censured this foolish inclination, for we must certainly take account of the Spirits which serve the great cosmic scheme of things.

Our failure to do so, assuming an attitude where they remain outside our conscious awareness, make them all the more powerful. We shall only be able to judge human affairs if we are able to take a broader view of the impulses of life in the ascendant and also in the descendant. It is important, however, to keep clear of sympathies and antipathies.

Two streams have arisen in modern science; one of these I have called Goetheanism, the other Darwinism. If you study everything I have written, from the very beginning, you will see that I have never failed to recognize the profound significance of Darwinism. Some people were foolish enough to think I had fallen under the spell of materialism, and so on, when I wrote anything in favour of Darwin. We know, of course, that this was not from conviction, but had quite different reasons; and the people who say such things only need to think about it and they will know better than anyone else that they are not true.

But if you really study everything I have written you will see that I have always done justice to Darwinism, but have done so by contrasting it with Goetheanism, the view of the evolution of life. I have always sought to see such things as the theory of descent in the Darwinian sense on the one hand and the Goethean on the other, and I have done so because Goetheanism presents the ascending line, with organic evolution raised above mere physical existence”.