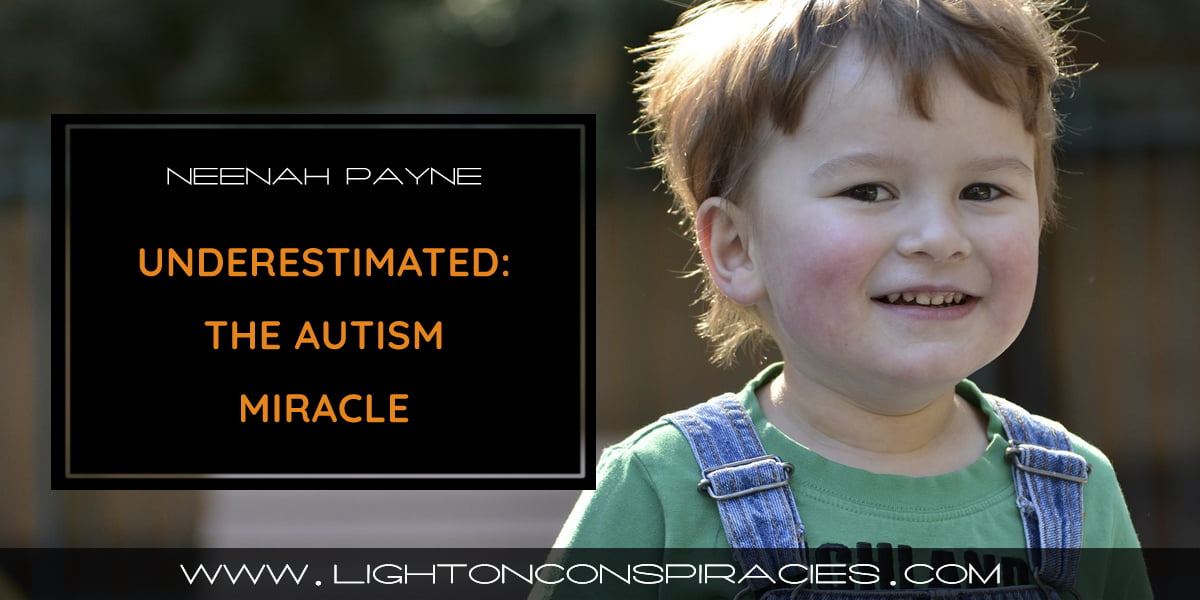 In An Autism Miracle, JB Handley and his son Jamison (Jamie) are interviewed. Jamison was born normal, but regressed at 15 months and for 17 years was unable to communicate with the world around him. Now, a new program has unlocked his voice, and in doing so, challenges everything we thought we knew about autism.

Underestimated: An Autism Miracle is a 2021 book by JB and Jamison. It was Jamison’s idea and he now wants to make a film documenting the program that has allowed him and his autistic schoolmates to “speak”. Jamison has proven to be super smart and a whiz at calculus. His goal now is to go to college to study neuroscience. His goal in 10 years is to be able to speak and to get married. Now about 7 million Americans have autism. However, only 1,000-1,500 have gone through the program that freed Jamison. Stephanie Seneff Ph.D. warns that by 2032, 50% (80% of boys) of Americans kids will be autistic!

From “Autistic” to “Non Speakers” or “Spellers”

It was originally assumed that autistic people were mentally retarded because their motor impairment was misinterpreted as a cognitive impairment. However, it has recently been discovered that a significant percentage of autistic people are of high intelligence and simply have a motor disorder that keeps them from speaking. The motor impairment blocks fine motor skills including speech. Much like stroke victims, it’s difficult for them to control their bodies.

Dawnmarie Gaivin is a Registered S2C Practitioner. “S2C” stands for “Spelling to Communicate”. She shows autistic people how to point to letters on a “letterboard” to spell words. This creates a neural pathway in the brain to the eyes and hands. Autistic people who use S2C to communicate prefer to be called “Non Speakers” or “Spellers” now. Jamie had his first S2C lesson in December 2019. In the course of a year, he graduated to a keyboard with a voice output. Jamie’s father serves as emotional support as Jamie uses the keyboard at home, but Jamie (like all teenagers) insisted on having someone else support him at school.

Jamie began his S2C journey with Elizabeth Vosseller, Director of the Growing Kids Therapy Center, after a friend whose son had been through the program told JB about it. Elizabeth began her session with Jamie by saying “I know how smart you are.” No one had every understood that about him. Until then, all his teachers had treated him as if he were retarded.

JB explains that Applied Behavior Analysis operates on the premise that autistic people are cognitively deficient and it focuses on just training their behavior so they can fit in better with society. Jamie found ABA to be mostly cruel. Since S2C operates on a “presumption of competence”, it treats autistic people with respect and provides an opening for them to communicate their intelligence.

The Rapid Prompting Method (RPM) is a precursor and cousin to Spelling 2 Communicate.

The book explains that many people who were trained in the ABA method refuse to even watch an autistic person using the Spelling 2 Communicate method. There may be several reasons for that. One is that they may be afraid of losing their licenses because the board has come out against S2C. Another reason is that they are just being close-minded. However, it may also be because the Rapid Prompting Method sometimes involves so much guidance from the team member that it is not clear the autistic person is originating what was being spelled.

However, as JB points out, anyone who is willing to witness a S2C session will immediately understand that it is the autistic person who is communicating, not the assistant. He explains that parents may be reluctant to try this method because they have tried so many approaches that did not work and they dread another false hope. JB felt that way initially, but overcame his hesitancy with the support of a friend whose autistic son had become a “speller”.

The goal of the book is to get parents of autistic kids to be open enough to investigate the S2C approach rather than to assume it cannot work for their child. JB was not aware that Jamie could read or spell and certainly did not know he was capable of doing trigonometry and calculus. That’s why the book is called “underestimated”. JB regrets that his son’s intelligence was so underestimated for 17 years simply because he can’t speak and that he was locked in silence for so long.

It is a miracle that a way to allow “Non Speakers” to communicate and participate in society has been found. Given that millions of Americans are now autistic and the numbers are soaring, it’s time to understand their reality now. It’s time to stop underestimating these people who have so much to communicate and contribute.

The True Cost of Autism

In CDC REMOVES CLAIM ‘VACCINES DO NOT CAUSE AUTISM’, Del Bigtree, host of The Highwire show, discusses the victory of his ICAN legal team’s victory over the CDC.

In The True Cost of Autism, Del discusses the true cost of autism starting at about 45 minutes. He interviews political economist Toby Rogers, PhD. The show recaps an historic win in New Jersey and reports that a new CDC study shows that autism is underdiagnosed.

In CDC AUTISM WHISTLEBLOWER TELLS ALL, Dr. Judith Zimmerman, Former Principal investigator for the CDCs Autism and Developmental Disability Monitoring in Utah, discusses how autism numbers in Utah were left with errors, and how study protocols weren’t followed to lower perceived autism numbers in the state.

Dire Prediction: 50% of American Kids Will Be Autistic by 2032

When Dr. Zach Bush started his clinic in rural Virginia in 2010, he prescribed really healthy food for his patients. However, he discovered that their guts had been destroyed by Monsanto’s GMO crops. Dr. Bush realized that the food of today is not like the food of the 1970s. The nutrients are profoundly deficient and there are chemicals in the foods — herbicides, pesticides, plastics, endocrine disruptors, heavy metals, etc. — that cause Leaky Gut and gluten intolerance.

Glyphosate is in Monsanto’s Roundup weed killer which was introduced in 1976. It’s the most effective weed killer that’s ever been developed because Roundup removes both the building blocks and the medicines in our foods.

In 1992, Roundup began to be sprayed on wheat and in 1996 on corn, soybeans, alfalfa, and then sugar beets and 30 other crops since then. That resulted in a chronic disease epidemic that will take down America. It’s not COVID or any infectious disease that is going to kill us. It is this chronic erosion of biology beneath our feet that threatens us with extinction within the next hundred years!

The introduction of Monsanto’s GMO foods in the 1990s caused the sudden decline in American health with surges in autism, cancer, Parkinson’s, Alzheimer’s, and a host of degenerative diseases as shown in many graphs like the one below from Why I Tell My Patients To Avoid GMO Foods.

MIT scientist Stephanie Seneff Ph.D., a biologist with more than 170 peer-reviewed academic articles, warns that 50% (80% of boys) of children will be autistic by 2032 — putting an unsustainable burden on the American healthcare system and economy.