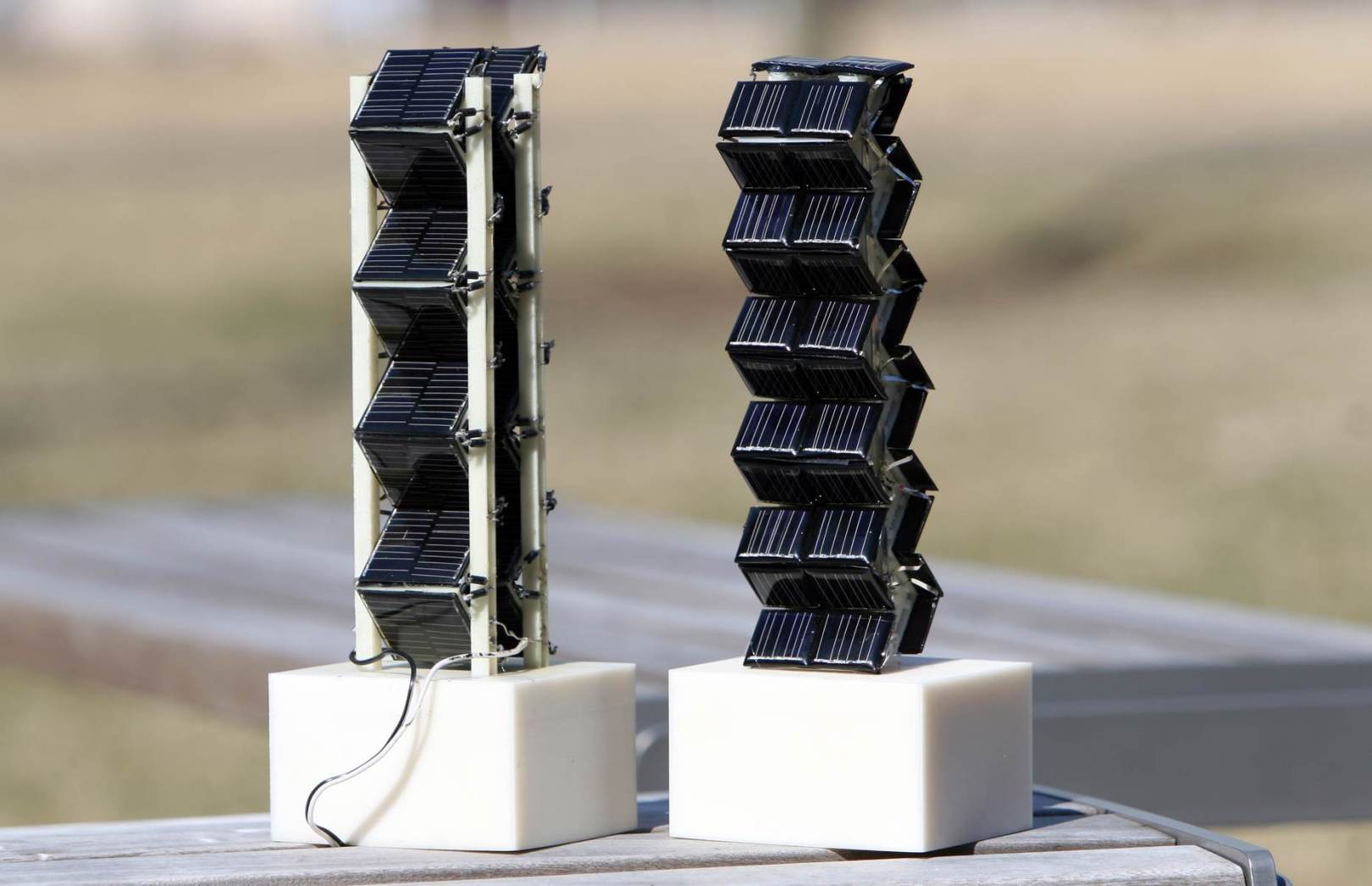 Even 10 years ago, this idea wouldn’t have been economically justified because the modules cost so much.

While we’ve looked at the development of solar cell technologies that employ nanoscale 3D structures to trap light and increase the amount of solar energy absorbed, MIT researchers have now used 3D on the macro scale to achieve power output that is up to 20 times greater than traditional fixed flat solar panels with the same base area. The approach developed by the researchers involves extending the solar cells upwards in a three-dimensional tower or cube configuration to enable them to better capture the sun’s rays when it is lower on the horizon.

Solar panels placed flat on a rooftop are most effective at harnessing solar energy when the sun is close to directly overhead, but quickly lose their efficiency as the angle of the sun’s rays hitting the panel increases – during the mornings, evenings, in the cooler months and in locations far from the equator. It is exactly in these situations that the researcher’s vertical solar modules provided the biggest boosts in power output.

After exploring a variety of possible 3D configurations using a computer algorithm and testing them under a range of latitudes, seasons and weather with specially developed analytic software, the team built three different individual 3D modules and tested them on the MIT lab building roof for several weeks. The results showed a boost in power output ranging from double to more than 20 times that of fixed flat solar panels with the same base area.

By going vertical and collecting more sunlight when the sun is closer to the horizon, the team’s 3D modules were able to generate a more uniform output over time. This uniformity extended over the course of each day, the seasons of a year, and even when accounting for blockage from clouds and shadows.

The researchers say this increase in uniformity could overcome one of the biggest hurdles facing solar energy – predictability of electricity supply that currently makes it difficult to integrate solar power sources into the grid.

They add that this uniformity, as well as the much higher energy output for a given area, would help offset the increased cost of the 3D modules, which are higher per the amount of energy generated when compared to conventional flat solar panels.

While the team’s computer modeling showed complex shapes – such as a cube with each face dimpled inward – would offer a 10 to 15 percent improvement in power output when compared to a simpler cube, these would be difficult to manufacture. In their rooftop tests, the team studied both simpler cube modules as well as more complex accordion-like shapes that could be shipped flat for unfolding on site.

This accordion-like tower was the tallest structure the team tested and such a design could be installed in a parking lot to provide a charging station for electric vehicles, according to Jeffrey Grossman, the senior author of the study and the Carl Richard Soderberg Career Development Associate Professor of Power Engineering at MIT.

Grossman and his colleagues believe that with the fall in the cost of solar cells in recent years – to the point where they have become less expensive than their supporting structures and the outlay for the land upon which they are placed – makes it an ideal time to examine the benefits of different solar cell configurations.

“Even 10 years ago, this idea wouldn’t have been economically justified because the modules cost so much,” Grossman says. But now, he adds, “the cost for silicon cells is a fraction of the total cost, a trend that will continue downward in the near future.”

Buoyed by the success of the tests on the individual 3D modules, the team now plans to study a collection of solar towers that will enable them to examine the effects that one tower’s shadow will have on another as the sun moves across the sky over the course of a day.

While the team believes its 3D solar cells could offer big advantages in flat-rooftop installations or urban environments where space is limited, they say they could also be used in larger-scale applications, such as solar farms, once a configuration that minimizes the shading effects between towers has been developed.