Prepare For Change
Home Awakening USA Experiments With WEF’s ‘You Will Own Nothing And Be Happy’ Agenda... 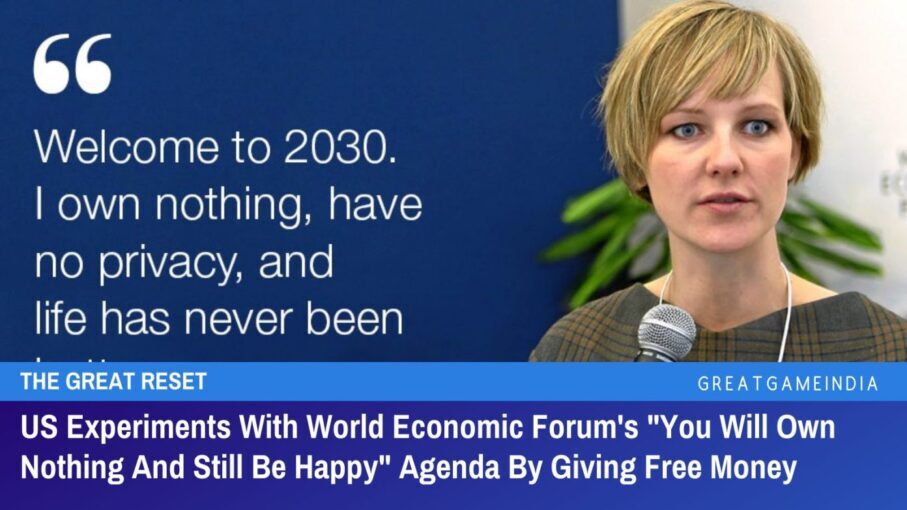 The US is officially set to put to test the World Economic Forum’s stated agenda that “You will own nothing and still be happy” by 2030  by giving away free money to people and tracking it to see what happens. 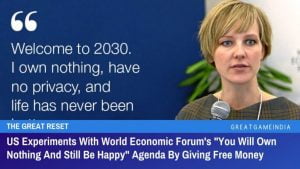 According to the World Economic Forum’s stated predictions for the future, “You will own nothing and you will still be happy” by 2030.

As one of the experts from their Global Future Councils, Danish MP Ida Auken puts it:

“Welcome to 2030. I own nothing, have no privacy, and life has never been better.” – Read more HERE.

Now dozens of American cities are putting these ideas to test by experimenting with giving some low-income residents a guaranteed income of $500 to $1,000 each month to do with as they please, and tracking what happens.

In experiments across the country, dozens of cities and counties — some using money from the $1.9 trillion COVID relief package approved in March — and the state of California are giving some low-income residents a guaranteed income of $500 to $1,000 each month to do with as they please, and tracking what happens.

A coalition known as Mayors for a Guaranteed Income plans to use the data — collected alongside a University of Pennsylvania-based research center — to lobby the White House and Congress for a federal guaranteed income or, for starters, to make the new $300 per month child tax credit that’s set to expire after this year permanent.

The surge in interest in these so-called free money pilot programs shows how quickly the concept of just handing out cash, no strings attached, has shifted from far-fetched idea to serious policy proposal, even as critics blast the programs as unaffordable or discouraging people from going to work.

“The pandemic showed us what is possible,” said Los Angeles Mayor Eric Garcetti, whose latest budget included a $24 million guaranteed income program to give 2,000 poor families $1,000 per month.

“We’re now going to be a pretty potent lobby to get the child tax credit permanent.”

Some pilot programs have been funded privately — Twitter founder Jack Dorsey has donated over $15 million to MGI. Other places, like Minneapolis, are using federal dollars from the American Rescue Plan.

Matt Zwolinski, director of the Center for Ethics, Economics and Public Policy at the University of San Diego, has studied guaranteed income policy for over a decade and says the increased interest is remarkable.

But he says there’s a flaw in using the pilot projects as a “proof of concept.”

Most are for one to two years and give money to a narrow slice of the population that knows the cash will eventually stop, so participants may be more likely to seek fulltime employment during that period than if they knew the cash was permanent.

This is exactly what Klaus Schwab proposes in his book COVID-19: The Great Reset.